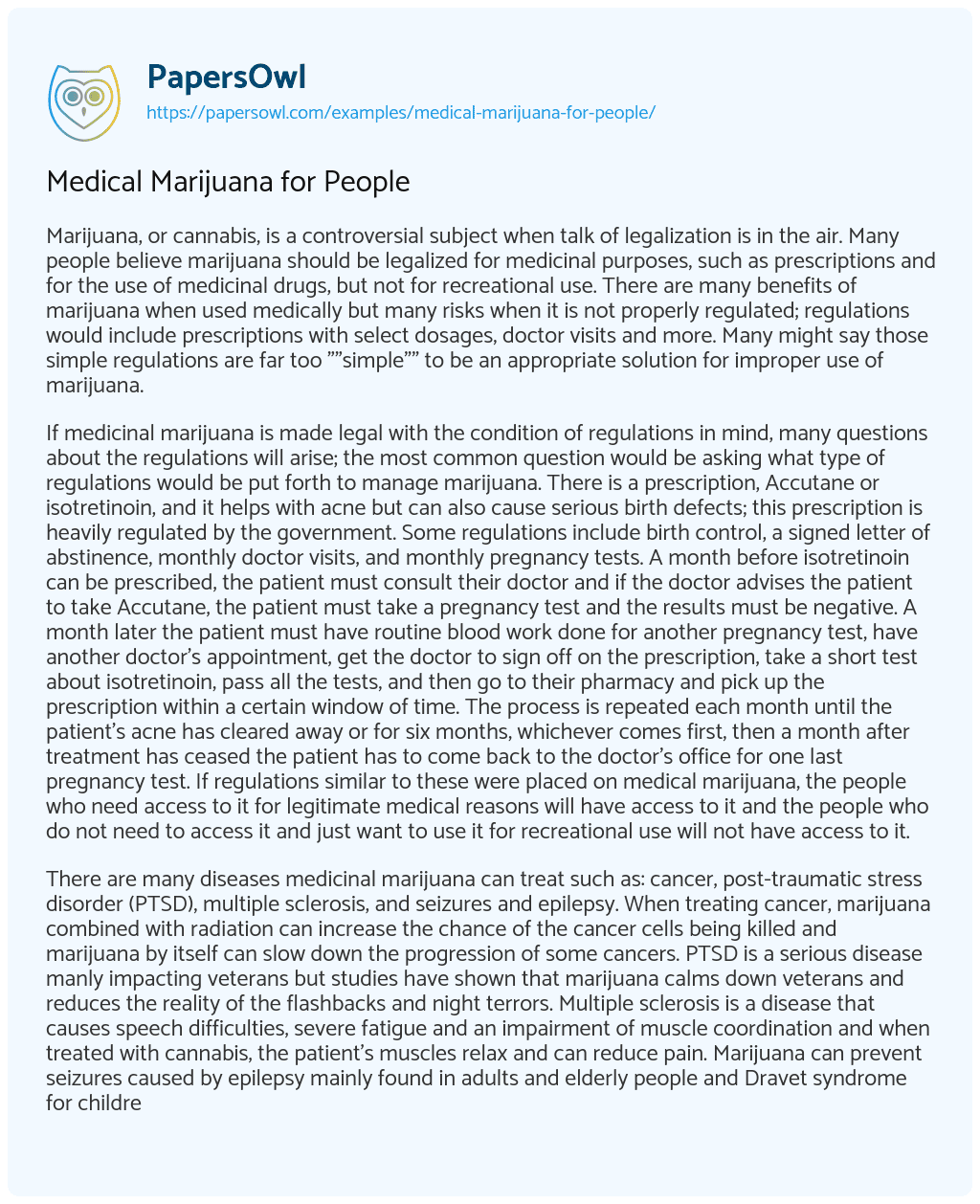 Marijuana, or cannabis, is a controversial subject when talk of legalization is in the air. Many people believe marijuana should be legalized for medicinal purposes, such as prescriptions and for the use of medicinal drugs, but not for recreational use. There are many benefits of marijuana when used medically but many risks when it is not properly regulated; regulations would include prescriptions with select dosages, doctor visits and more. Many might say those simple regulations are far too “”simple”” to be an appropriate solution for improper use of marijuana.

If medicinal marijuana is made legal with the condition of regulations in mind, many questions about the regulations will arise; the most common question would be asking what type of regulations would be put forth to manage marijuana. There is a prescription, Accutane or isotretinoin, and it helps with acne but can also cause serious birth defects; this prescription is heavily regulated by the government. Some regulations include birth control, a signed letter of abstinence, monthly doctor visits, and monthly pregnancy tests. A month before isotretinoin can be prescribed, the patient must consult their doctor and if the doctor advises the patient to take Accutane, the patient must take a pregnancy test and the results must be negative. A month later the patient must have routine blood work done for another pregnancy test, have another doctor’s appointment, get the doctor to sign off on the prescription, take a short test about isotretinoin, pass all the tests, and then go to their pharmacy and pick up the prescription within a certain window of time. The process is repeated each month until the patient’s acne has cleared away or for six months, whichever comes first, then a month after treatment has ceased the patient has to come back to the doctor’s office for one last pregnancy test. If regulations similar to these were placed on medical marijuana, the people who need access to it for legitimate medical reasons will have access to it and the people who do not need to access it and just want to use it for recreational use will not have access to it.

There are many diseases medicinal marijuana can treat such as: cancer, post-traumatic stress disorder (PTSD), multiple sclerosis, and seizures and epilepsy. When treating cancer, marijuana combined with radiation can increase the chance of the cancer cells being killed and marijuana by itself can slow down the progression of some cancers. PTSD is a serious disease manly impacting veterans but studies have shown that marijuana calms down veterans and reduces the reality of the flashbacks and night terrors. Multiple sclerosis is a disease that causes speech difficulties, severe fatigue and an impairment of muscle coordination and when treated with cannabis, the patient’s muscles relax and can reduce pain. Marijuana can prevent seizures caused by epilepsy mainly found in adults and elderly people and Dravet syndrome for children and it is also believed to have neuroprotective properties but not many studies have been executed. The diseases listed above are only a few examples of the many diseases medical marijuana can treat if there are proper regulations. There are diseases medical marijuana cannot treat such as cardiac disease because there is a possibility marijuana could enhance some symptoms of cardiac diseases such as high blood pressure, palpitations and syncope. Patients with Alzheimer’s diseases can be treated with medical marijuana but it is not advised because it is possible that marijuana can enhance the effects of the symptoms. Many diseases can be treated with medical marijuana but there are some that should not be.

The first regulation for medicinal cannabis would be regular doctor appointments of either once a week, once every other week, or once a month. By having regular doctor appointments, the doctor can monitor the patient for positive or negative changes. For example, when patients are on Accutane positive changes are that patients receive clear or mostly clear skin and the possible negative changes are dry skin, chapped lips, and irritability. Positive changes for patients being treated by medical marijuana would be healing of many different diseases like some listed above and the possible negative changes could be depression or slight mental alterations which is why it should not be used for people with Alzheimer’s disease and other neurological diseases.

The second regulation would be the dosage of medical marijuana. Depending on the disease the patient has depends on how many milligrams or grams the doses would be. Also, the dosage would be regulated so patients do not use a months worth of the prescription within two weeks. To regulate this, blood tests before the doctor appointment would have to be mandatory so the doctor could see how often the patient is taking the prescription and how long it was since the patient last administered a dose. In a medical marijuana patient’s bloodstream, there will be traces of the drug and there will be a lesser amount of the drug the longer it has been since the last dose. So if the patient uses a months worth of marijuana in two weeks the doctor will be able to tell based on the amount of drug trace in the patient’s bloodstream and the doctor would also be able to tell how often the patient administers the drug.

If patients were not following the proper guidelines and regulations for medical marijuana doctors would have the ability to cease treatment with it. If doctors saw the patient was having an adverse effect to the medical marijuana, the doctor could bring treatment to a halt. Also, based on blood work the doctor can identify if the patient is using the prescription in the correct dosages and if at all, so if a patient is not administering the marijuana how they should or if they are selling the prescription, the doctor can tell and will be able to discontinue treatment. Doctors should have the ability to stop prescribing medicinal marijuana if they see that they should.

There are many people who believe medical marijuana should not be legal and if it is made legal the regulations would not be enough. People would also argue that regulations could not control the adverse side effects of medical marijuana such as a high or psychosis. Two of the main components of marijuana are tetrahydrocannabinol (THC) and cannabidiol (CBD); THC causes the high and CBD initiates healing. THC and CBD had an inverse relationship, meaning when one increases the other will decrease; as THC increases the amount of CBD will decrease and it is the same the other way around. The more THC in marijuana, the less CBD therefore, when a person administers a dose of recreational marijuana with high levels of THC and low levels of CBD, this person will receive a high, but if a patient was to administer a dose of medicinal marijuana with ow levels of THC and high levels of CBD, the patient will receive healing without the high.

Medical Marijuana and its Benefit on Patient Satisfaction