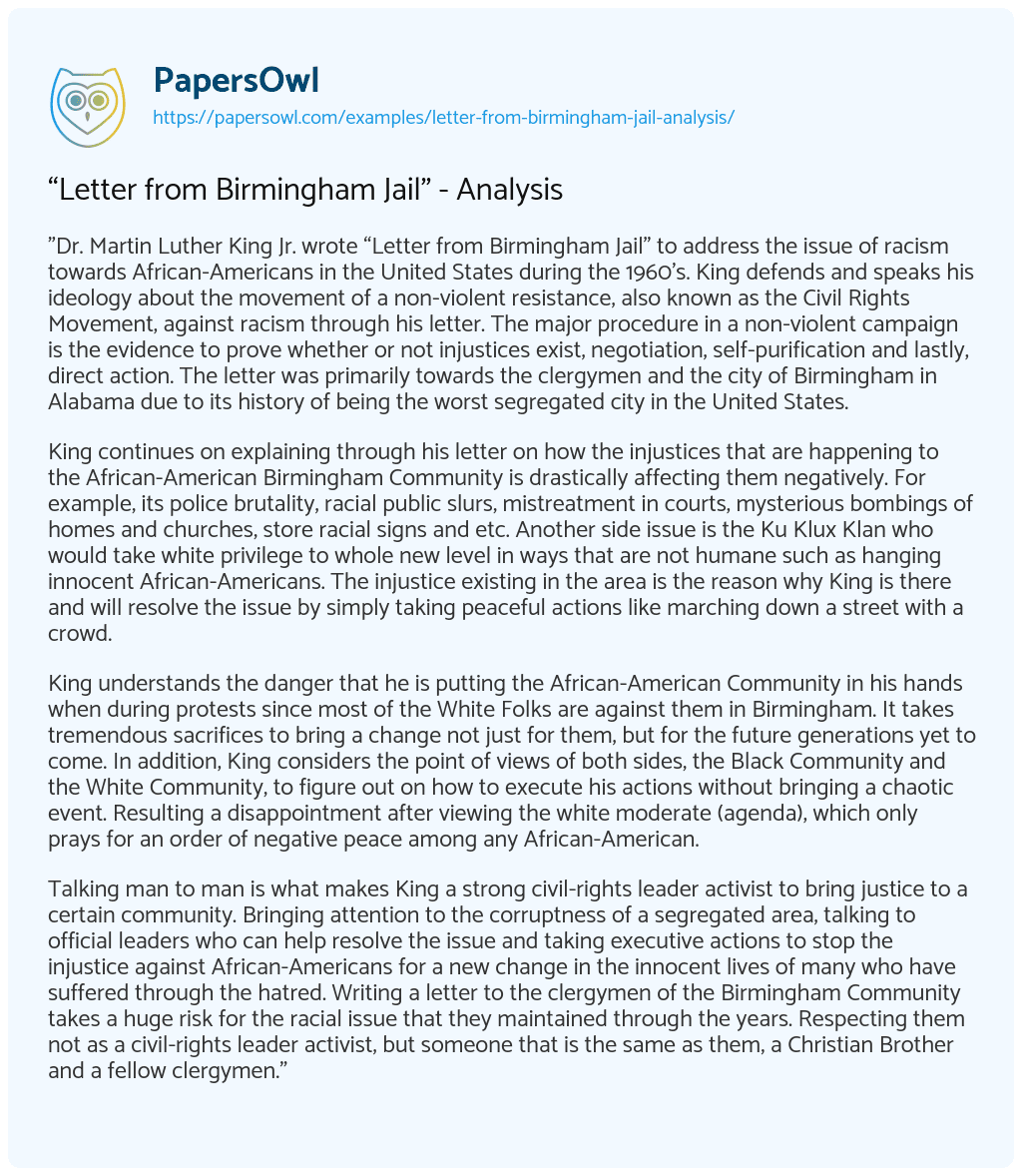 “Dr. Martin Luther King Jr. wrote “Letter from Birmingham Jail” to address the issue of racism towards African-Americans in the United States during the 1960’s. King defends and speaks his ideology about the movement of a non-violent resistance, also known as the Civil Rights Movement, against racism through his letter. The major procedure in a non-violent campaign is the evidence to prove whether or not injustices exist, negotiation, self-purification and lastly, direct action. The letter was primarily towards the clergymen and the city of Birmingham in Alabama due to its history of being the worst segregated city in the United States.

King continues on explaining through his letter on how the injustices that are happening to the African-American Birmingham Community is drastically affecting them negatively. For example, its police brutality, racial public slurs, mistreatment in courts, mysterious bombings of homes and churches, store racial signs and etc. Another side issue is the Ku Klux Klan who would take white privilege to whole new level in ways that are not humane such as hanging innocent African-Americans. The injustice existing in the area is the reason why King is there and will resolve the issue by simply taking peaceful actions like marching down a street with a crowd.

King understands the danger that he is putting the African-American Community in his hands when during protests since most of the White Folks are against them in Birmingham. It takes tremendous sacrifices to bring a change not just for them, but for the future generations yet to come. In addition, King considers the point of views of both sides, the Black Community and the White Community, to figure out on how to execute his actions without bringing a chaotic event. Resulting a disappointment after viewing the white moderate (agenda), which only prays for an order of negative peace among any African-American.

Talking man to man is what makes King a strong civil-rights leader activist to bring justice to a certain community. Bringing attention to the corruptness of a segregated area, talking to official leaders who can help resolve the issue and taking executive actions to stop the injustice against African-Americans for a new change in the innocent lives of many who have suffered through the hatred. Writing a letter to the clergymen of the Birmingham Community takes a huge risk for the racial issue that they maintained through the years. Respecting them not as a civil-rights leader activist, but someone that is the same as them, a Christian Brother and a fellow clergymen.”

Analysis of Letter from Birmingham Jail