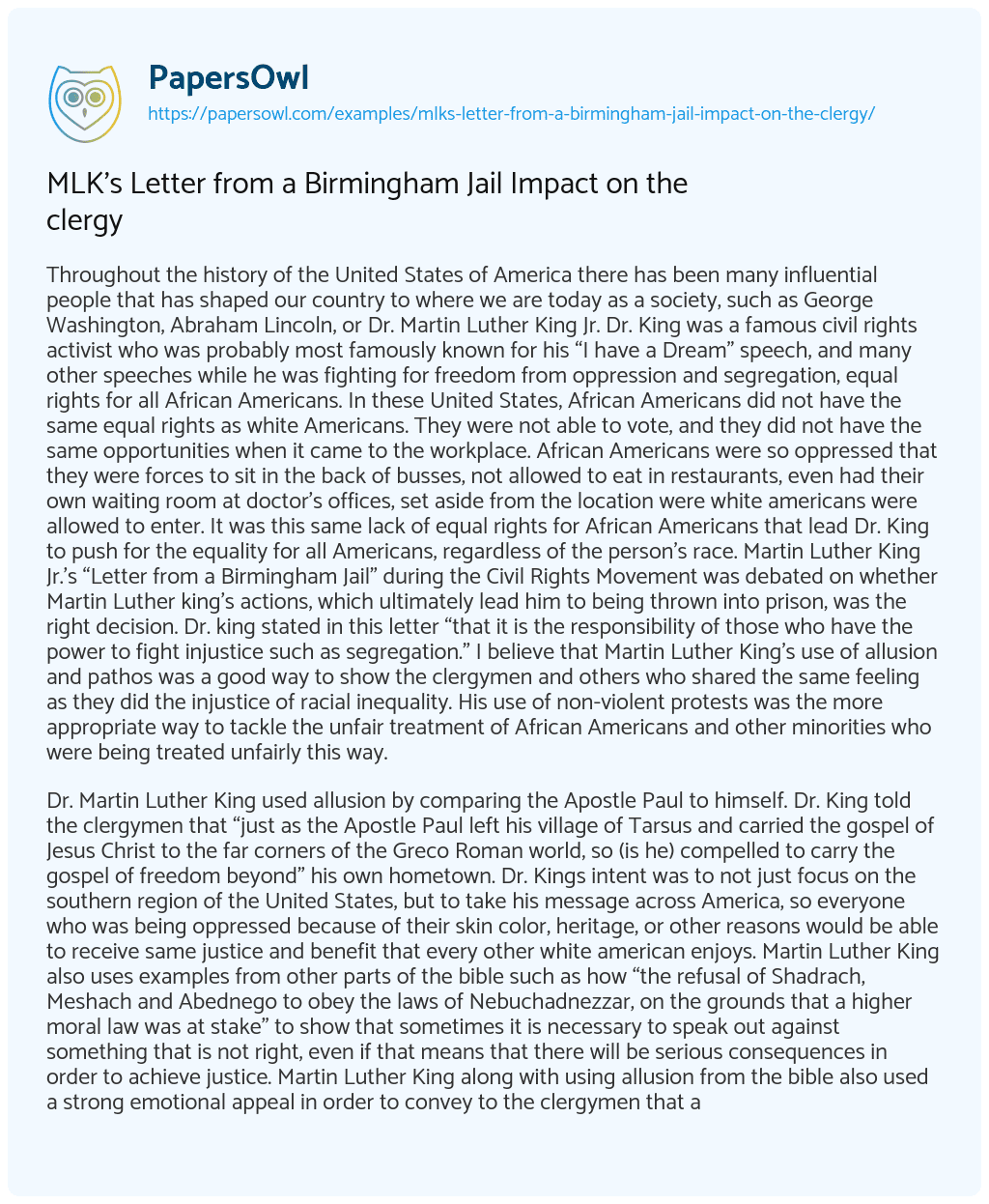 Throughout the history of the United States of America there has been many influential people that has shaped our country to where we are today as a society, such as George Washington, Abraham Lincoln, or Dr. Martin Luther King Jr. Dr. King was a famous civil rights activist who was probably most famously known for his “I have a Dream” speech, and many other speeches while he was fighting for freedom from oppression and segregation, equal rights for all African Americans. In these United States, African Americans did not have the same equal rights as white Americans. They were not able to vote, and they did not have the same opportunities when it came to the workplace. African Americans were so oppressed that they were forces to sit in the back of busses, not allowed to eat in restaurants, even had their own waiting room at doctor’s offices, set aside from the location were white americans were allowed to enter. It was this same lack of equal rights for African Americans that lead Dr. King to push for the equality for all Americans, regardless of the person’s race. Martin Luther King Jr.’s “Letter from a Birmingham Jail” during the Civil Rights Movement was debated on whether Martin Luther king’s actions, which ultimately lead him to being thrown into prison, was the right decision. Dr. king stated in this letter “that it is the responsibility of those who have the power to fight injustice such as segregation.” I believe that Martin Luther King’s use of allusion and pathos was a good way to show the clergymen and others who shared the same feeling as they did the injustice of racial inequality. His use of non-violent protests was the more appropriate way to tackle the unfair treatment of African Americans and other minorities who were being treated unfairly this way.

Dr. Martin Luther King used allusion by comparing the Apostle Paul to himself. Dr. King told the clergymen that “just as the Apostle Paul left his village of Tarsus and carried the gospel of Jesus Christ to the far corners of the Greco Roman world, so (is he) compelled to carry the gospel of freedom beyond” his own hometown. Dr. Kings intent was to not just focus on the southern region of the United States, but to take his message across America, so everyone who was being oppressed because of their skin color, heritage, or other reasons would be able to receive same justice and benefit that every other white american enjoys. Martin Luther King also uses examples from other parts of the bible such as how “the refusal of Shadrach, Meshach and Abednego to obey the laws of Nebuchadnezzar, on the grounds that a higher moral law was at stake” to show that sometimes it is necessary to speak out against something that is not right, even if that means that there will be serious consequences in order to achieve justice. Martin Luther King along with using allusion from the bible also used a strong emotional appeal in order to convey to the clergymen that a solution was needed and that his non-violent protests was the way to achieve this solution. Dr. King felt that a peaceful demonstration would show that they were not in for a type of war, but that they were serious about their intent to bring the awareness of all people being treated the same way. While many did not agree with his non-violent approach, they willing to give it a chance, and willing to accept whatever consequences would come their way.

Martin Luther King’s use of pathos throughout his letter showed that he was adamant about the Civil Rights Movement, and his peaceful protests was the correct response to the injustice of segregation and that it was the Clergymen of Birmingham who were the missguided ones. DR. Martin Luther King talks about how the African Americans before and during the Civil Rights Movement “hopes had been blasted, and the shadow of deep disappointment settled upon” them which makes the clergymen and any other readers empathize with the African Americans. This also helped them understand why Dr. King was insisting that there is a need for non-violent protests. Dr. King talked about how they have “waited for more than 340 years for our constitutional and God given rights” which helps people with opposing viewpoints to realize that it has been a substantial amount of time before there was hope that they would finally receive equal rights and justice for all the time they were persecuted.

The Clergy of Birmingham believed that Martin Luther King’s use of non-violent protests was a bad idea because it considered unwise and was done at the completely wrong time. Everyone is entitled to their opinion on the matter, but if not at that moment then when would it have been done. If Dr. King had waited for the “perfect” moment to start his protest in Birmingham he would have never done it because “justice too long delayed is justice denied”. Also, just because a small group of people believe that it was the wrong moment to do his peaceful protests does not mean that they are correct or that their opinions are absolute. The clergymen stating that the unwise decision of protesting in Birmingham got Martin Luther King “arrested on a charge of parading without a permit. Now, there is nothing wrong in having an ordinance which requires a permit for a parade. But such an ordinance becomes unjust when it is used to maintain segregation and to deny citizens the first-Amendment privilege of peaceful assembly and protest”. This demonstrated that although it was reasonable to disagree to do a protest without the proper paperwork, it is not reasonable to disagree with the reasons for why the peaceful protest and assembly should be held.

“A Letter from a Birmingham Jail” by Dr. Martin Luther King showed the clergymen of Birmingham the injustice and the necessity for these protests. Dr. King showed this by using a strong emotional appeal to reach out to the clergymen and others who who were faithful to their cause. He also used references from the bible in order to demonstrate to the Birmingham clergy that the time for change relating to civil rights is now rather than later. Just as the bible called for the people to respond to the calling of God, Dr. King knew that waiting for the perfect time would probably never come. So believing in his cause, he pushed and believed that there’s no perfect timing. We can look back in our personal lives and reflect on the decisions Dr. King made and see for ourselves that his decision to act in Birmingham was the right one in the end.

MLK’s Letter from a Birmingham Jail Impact on the clergy. (2020, Dec 15). Retrieved from https://papersowl.com/examples/mlks-letter-from-a-birmingham-jail-impact-on-the-clergy/