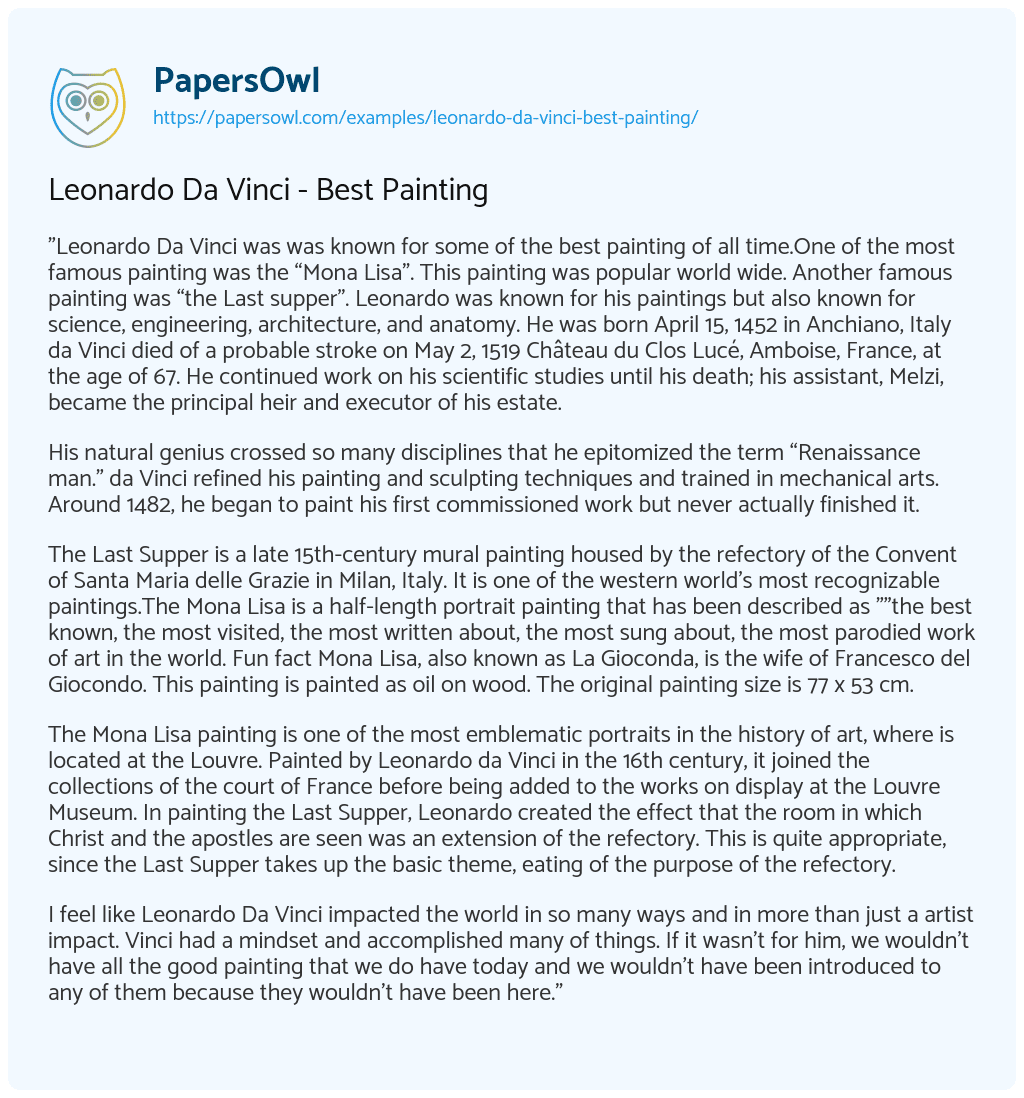 “Leonardo Da Vinci was was known for some of the best painting of all time.One of the most famous painting was the “Mona Lisa”. This painting was popular world wide. Another famous painting was “the Last supper”. Leonardo was known for his paintings but also known for science, engineering, architecture, and anatomy. He was born April 15, 1452 in Anchiano, Italy da Vinci died of a probable stroke on May 2, 1519 Château du Clos Lucé, Amboise, France, at the age of 67. He continued work on his scientific studies until his death; his assistant, Melzi, became the principal heir and executor of his estate.

His natural genius crossed so many disciplines that he epitomized the term “Renaissance man.” da Vinci refined his painting and sculpting techniques and trained in mechanical arts. Around 1482, he began to paint his first commissioned work but never actually finished it.

The Last Supper is a late 15th-century mural painting housed by the refectory of the Convent of Santa Maria delle Grazie in Milan, Italy. It is one of the western world’s most recognizable paintings.The Mona Lisa is a half-length portrait painting that has been described as “”the best known, the most visited, the most written about, the most sung about, the most parodied work of art in the world. Fun fact Mona Lisa, also known as La Gioconda, is the wife of Francesco del Giocondo. This painting is painted as oil on wood. The original painting size is 77 x 53 cm.

The Mona Lisa painting is one of the most emblematic portraits in the history of art, where is located at the Louvre. Painted by Leonardo da Vinci in the 16th century, it joined the collections of the court of France before being added to the works on display at the Louvre Museum. In painting the Last Supper, Leonardo created the effect that the room in which Christ and the apostles are seen was an extension of the refectory. This is quite appropriate, since the Last Supper takes up the basic theme, eating of the purpose of the refectory.