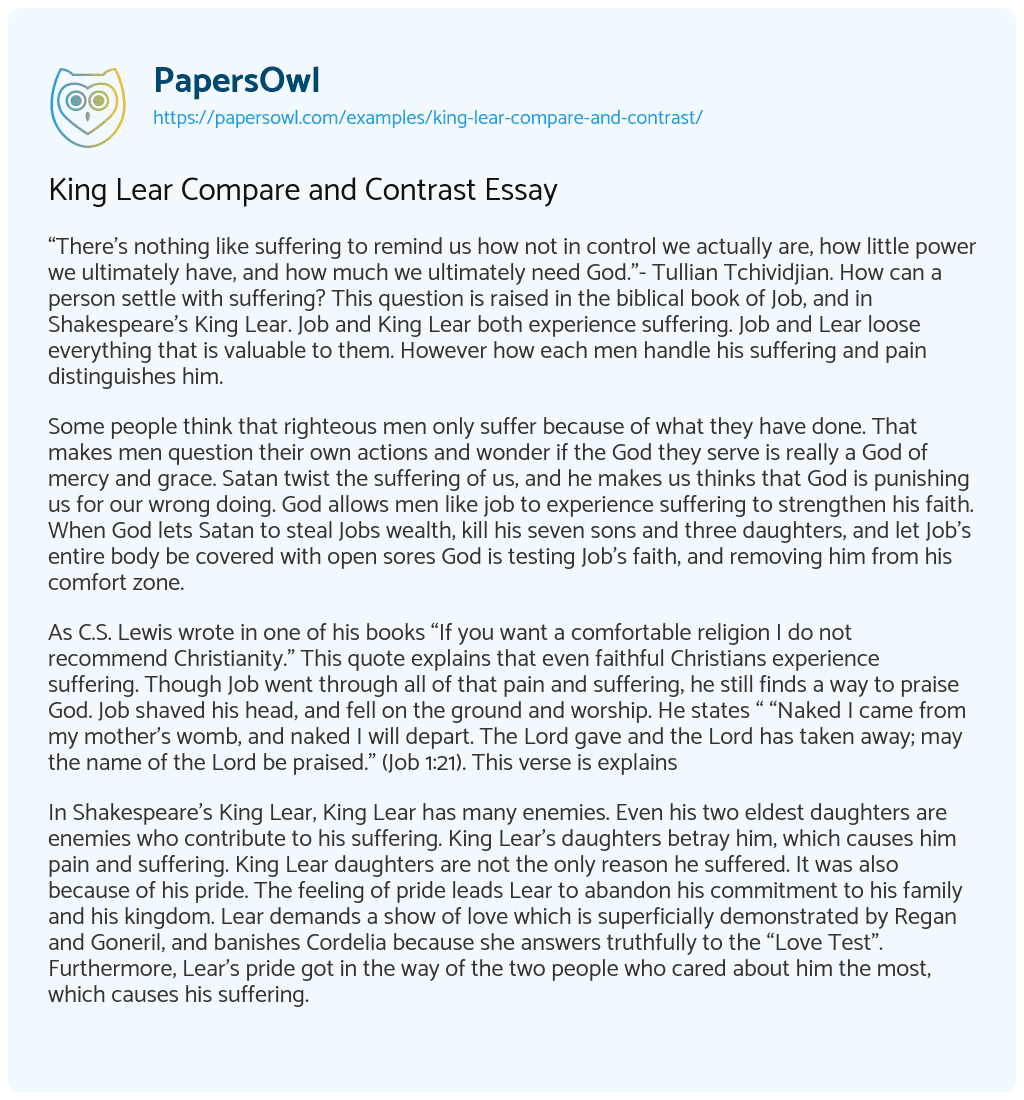 “There’s nothing like suffering to remind us how not in control we actually are, how little power we ultimately have, and how much we ultimately need God.”- Tullian Tchividjian. How can a person settle with suffering? This question is raised in the biblical book of Job, and in Shakespeare’s King Lear. Job and King Lear both experience suffering. Job and Lear loose everything that is valuable to them. However how each men handle his suffering and pain distinguishes him.

Some people think that righteous men only suffer because of what they have done. That makes men question their own actions and wonder if the God they serve is really a God of mercy and grace. Satan twist the suffering of us, and he makes us thinks that God is punishing us for our wrong doing. God allows men like job to experience suffering to strengthen his faith. When God lets Satan to steal Jobs wealth, kill his seven sons and three daughters, and let Job’s entire body be covered with open sores God is testing Job’s faith, and removing him from his comfort zone.

As C.S. Lewis wrote in one of his books “If you want a comfortable religion I do not recommend Christianity.” This quote explains that even faithful Christians experience suffering. Though Job went through all of that pain and suffering, he still finds a way to praise God. Job shaved his head, and fell on the ground and worship. He states “ “Naked I came from my mother’s womb, and naked I will depart. The Lord gave and the Lord has taken away; may the name of the Lord be praised.” (Job 1:21). This verse is explains

In Shakespeare’s King Lear, King Lear has many enemies. Even his two eldest daughters are enemies who contribute to his suffering. King Lear’s daughters betray him, which causes him pain and suffering. King Lear daughters are not the only reason he suffered. It was also because of his pride. The feeling of pride leads Lear to abandon his commitment to his family and his kingdom. Lear demands a show of love which is superficially demonstrated by Regan and Goneril, and banishes Cordelia because she answers truthfully to the “Love Test”. Furthermore, Lear’s pride got in the way of the two people who cared about him the most, which causes his suffering.

King Lear Vs. Job: what about Fate?