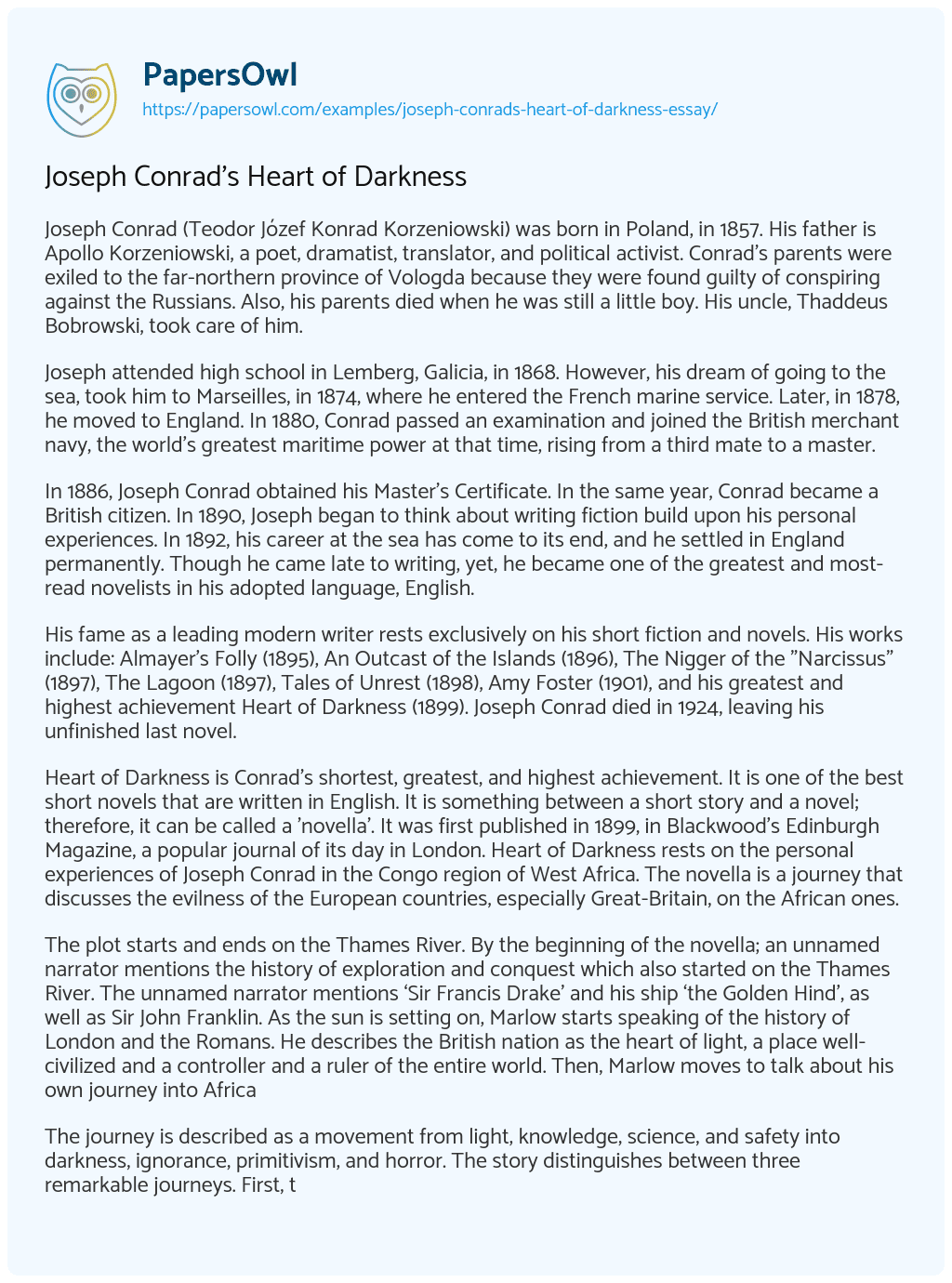 Joseph Conrad (Teodor Józef Konrad Korzeniowski) was born in Poland, in 1857. His father is Apollo Korzeniowski, a poet, dramatist, translator, and political activist. Conrad’s parents were exiled to the far-northern province of Vologda because they were found guilty of conspiring against the Russians. Also, his parents died when he was still a little boy. His uncle, Thaddeus Bobrowski, took care of him.

Joseph attended high school in Lemberg, Galicia, in 1868. However, his dream of going to the sea, took him to Marseilles, in 1874, where he entered the French marine service. Later, in 1878, he moved to England. In 1880, Conrad passed an examination and joined the British merchant navy, the world’s greatest maritime power at that time, rising from a third mate to a master.

In 1886, Joseph Conrad obtained his Master’s Certificate. In the same year, Conrad became a British citizen. In 1890, Joseph began to think about writing fiction build upon his personal experiences. In 1892, his career at the sea has come to its end, and he settled in England permanently. Though he came late to writing, yet, he became one of the greatest and most-read novelists in his adopted language, English.

Heart of Darkness is Conrad’s shortest, greatest, and highest achievement. It is one of the best short novels that are written in English. It is something between a short story and a novel; therefore, it can be called a ‘novella’. It was first published in 1899, in Blackwood’s Edinburgh Magazine, a popular journal of its day in London. Heart of Darkness rests on the personal experiences of Joseph Conrad in the Congo region of West Africa. The novella is a journey that discusses the evilness of the European countries, especially Great-Britain, on the African ones.

The plot starts and ends on the Thames River. By the beginning of the novella; an unnamed narrator mentions the history of exploration and conquest which also started on the Thames River. The unnamed narrator mentions ‘Sir Francis Drake’ and his ship ‘the Golden Hind’, as well as Sir John Franklin. As the sun is setting on, Marlow starts speaking of the history of London and the Romans. He describes the British nation as the heart of light, a place well-civilized and a controller and a ruler of the entire world. Then, Marlow moves to talk about his own journey into Africa

The journey is described as a movement from light, knowledge, science, and safety into darkness, ignorance, primitivism, and horror. The story distinguishes between three remarkable journeys. First, there is a physical journey up-river from Europe to Africa which takes Marlow to Kurtz. Second, there is an in-time journey; the deeper Marlow travels into the Congo, the further backward he is going in civilization. Third, there is a psychological journey that can be depicted as a journey into the spiritual side of human beings. The story is focused around two main characters and the other characters in the story are secondary.

First, there is Marlow, a highly skilled navigator who is employed by a Continental trading company as a steamboat captain. He is given a mission to head to the Congo to visit an important agent of the company, who has lost contact and as was reported, he is fallen ill, and retrieve him, if necessary. Second, there is Kurtz, a surprisingly successful agent who is sent by the Continental trading company to Africa to find ivory and bring light, civilization, and progress to the natives in Africa, whom the Europeans consider savages. Yet, the wilderness has taken him; he becomes savage more than the natives. He has lost any sense of restraint, faith, and fear. He sets himself up as a sort of god to the region of the natives. He also uses violence against the locals to stimulate fear and secure more ivory.

The title “Heart of Darkness” can be interpreted literally and metaphorically. Literally, the title refers to the materialistic location which is inside Africa. It suggests that the gloomy jungle in Africa is the heart of the darkness because it is a wild, brutal, and isolated place. That is, the title defines the dark civilization of Africa. In fact, for the Europeans, the Africans were seen as savages, uncivilized, primitive and ignorant. Moreover, Africa at that time was turned to a place of sin and conflict.

It was a place where the Europeans were fighting for power and wealth, while the natives were brought into slavery. So, the title represents the journey as a movement from civilization and light into ignorance and darkness, as it was stated in the novella: “We penetrated deeper and deeper into the heart of darkness”. Metaphorically, the title points out to the darkness and the evilness in the hearts of the people in the Congo: the dark side of human nature.

In other words, the title hints to the brutality and the injustice of the white men or the Europeans toward the African slaves. It also refers to the movement of imperialism into Africa which probably leads Africa into darkness.The title could also refer to the spiritual darkness which comes out of white men or civilized men when they become greedy, and the darkness takes over their souls. For instance, several characters in the story brought out the savagery in them after they traveled into the heart of the darkness which is the dark jungle. In brief, human beings are mixed creatures of good and evil, light and darkness.