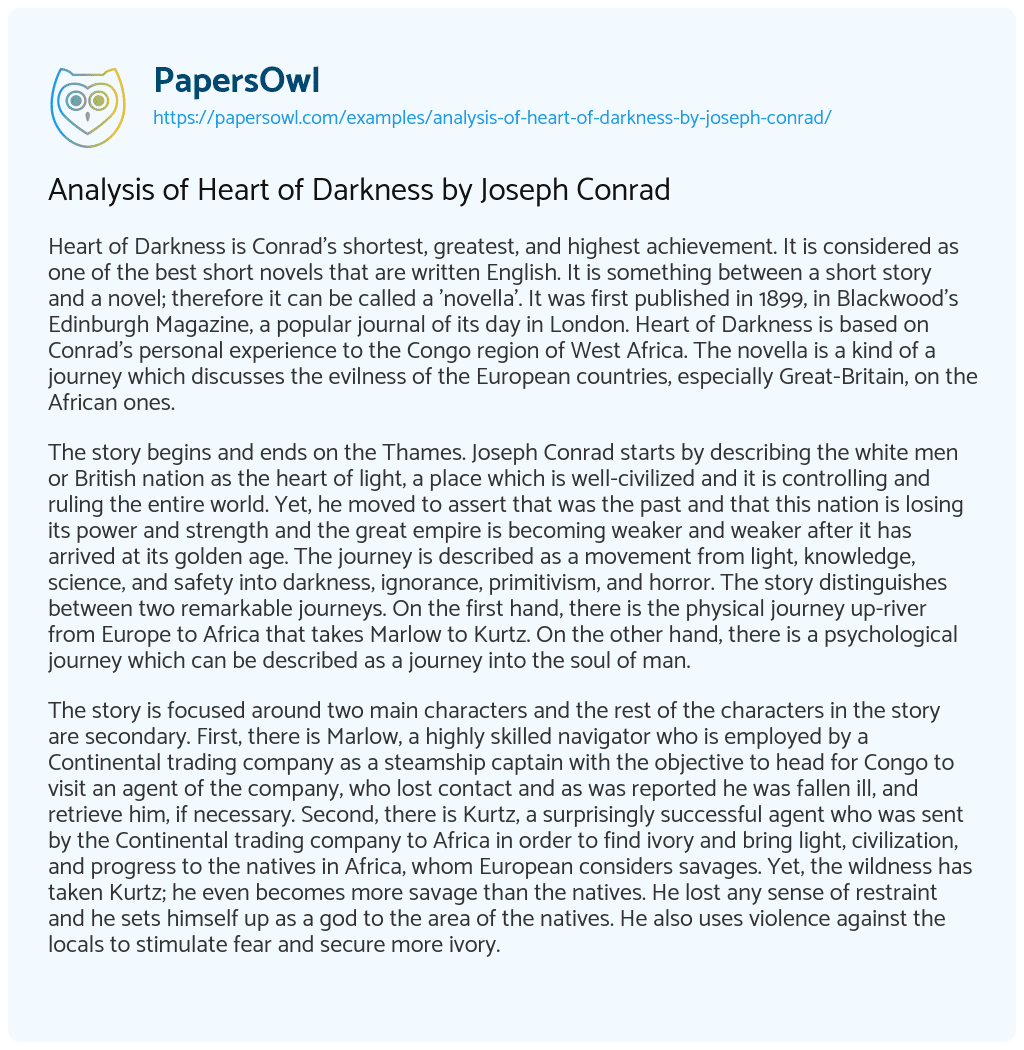 Heart of Darkness is Conrad’s shortest, greatest, and highest achievement. It is considered as one of the best short novels that are written English. It is something between a short story and a novel; therefore it can be called a ‘novella’. It was first published in 1899, in Blackwood’s Edinburgh Magazine, a popular journal of its day in London. Heart of Darkness is based on Conrad’s personal experience to the Congo region of West Africa. The novella is a kind of a journey which discusses the evilness of the European countries, especially Great-Britain, on the African ones.

The story begins and ends on the Thames. Joseph Conrad starts by describing the white men or British nation as the heart of light, a place which is well-civilized and it is controlling and ruling the entire world. Yet, he moved to assert that was the past and that this nation is losing its power and strength and the great empire is becoming weaker and weaker after it has arrived at its golden age. The journey is described as a movement from light, knowledge, science, and safety into darkness, ignorance, primitivism, and horror. The story distinguishes between two remarkable journeys. On the first hand, there is the physical journey up-river from Europe to Africa that takes Marlow to Kurtz. On the other hand, there is a psychological journey which can be described as a journey into the soul of man.

The story is focused around two main characters and the rest of the characters in the story are secondary. First, there is Marlow, a highly skilled navigator who is employed by a Continental trading company as a steamship captain with the objective to head for Congo to visit an agent of the company, who lost contact and as was reported he was fallen ill, and retrieve him, if necessary. Second, there is Kurtz, a surprisingly successful agent who was sent by the Continental trading company to Africa in order to find ivory and bring light, civilization, and progress to the natives in Africa, whom European considers savages. Yet, the wildness has taken Kurtz; he even becomes more savage than the natives. He lost any sense of restraint and he sets himself up as a god to the area of the natives. He also uses violence against the locals to stimulate fear and secure more ivory.

Analysis of Heart of Darkness by Joseph Conrad. (2021, Jul 05). Retrieved from https://papersowl.com/examples/analysis-of-heart-of-darkness-by-joseph-conrad/