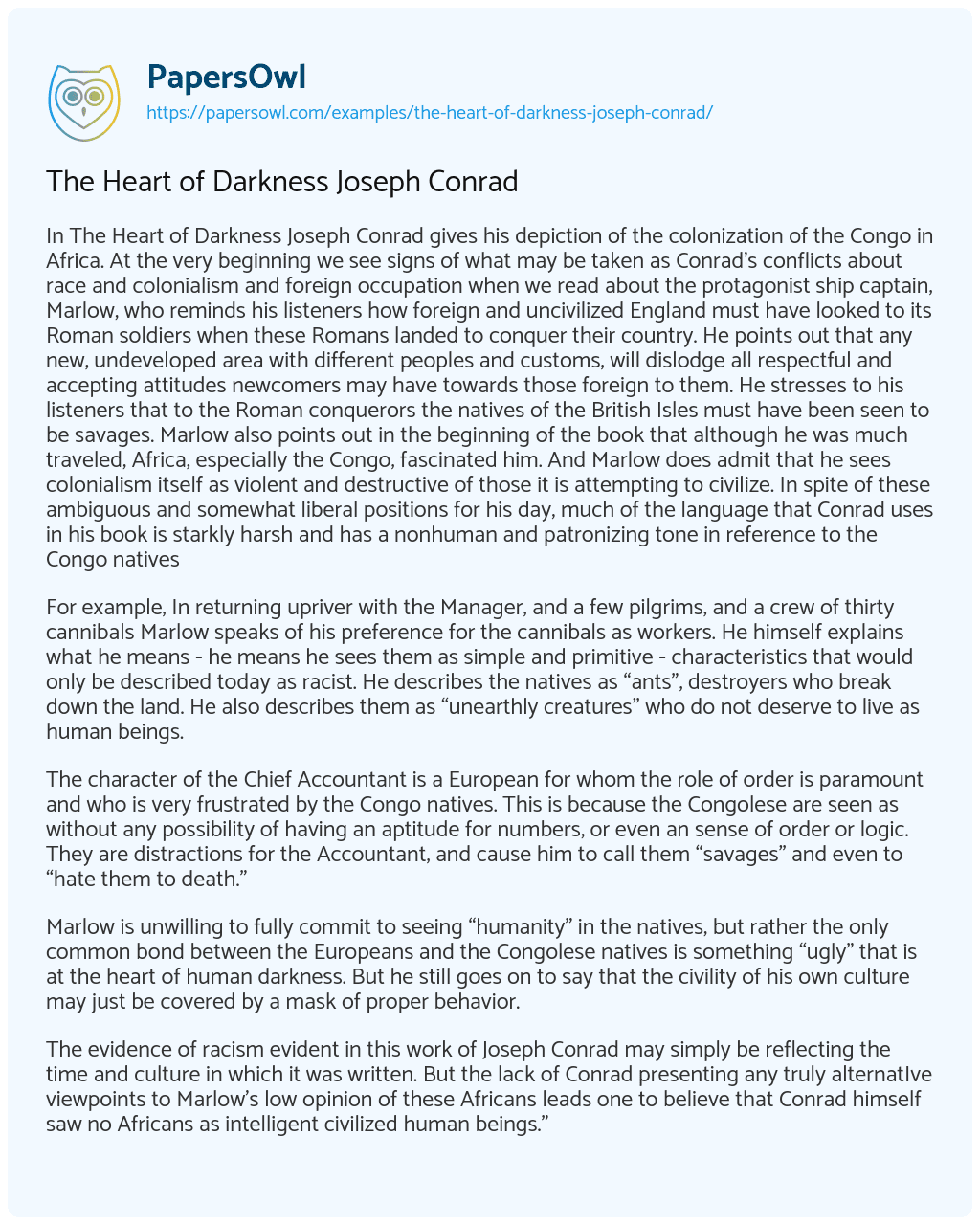 In The Heart of Darkness Joseph Conrad gives his depiction of the colonization of the Congo in Africa. At the very beginning we see signs of what may be taken as Conrad’s conflicts about race and colonialism and foreign occupation when we read about the protagonist ship captain, Marlow, who reminds his listeners how foreign and uncivilized England must have looked to its Roman soldiers when these Romans landed to conquer their country. He points out that any new, undeveloped area with different peoples and customs, will dislodge all respectful and accepting attitudes newcomers may have towards those foreign to them. He stresses to his listeners that to the Roman conquerors the natives of the British Isles must have been seen to be savages. Marlow also points out in the beginning of the book that although he was much traveled, Africa, especially the Congo, fascinated him. And Marlow does admit that he sees colonialism itself as violent and destructive of those it is attempting to civilize. In spite of these ambiguous and somewhat liberal positions for his day, much of the language that Conrad uses in his book is starkly harsh and has a nonhuman and patronizing tone in reference to the Congo natives

For example, In returning upriver with the Manager, and a few pilgrims, and a crew of thirty cannibals Marlow speaks of his preference for the cannibals as workers. He himself explains what he means – he means he sees them as simple and primitive – characteristics that would only be described today as racist. He describes the natives as “ants”, destroyers who break down the land. He also describes them as “unearthly creatures” who do not deserve to live as human beings.

The character of the Chief Accountant is a European for whom the role of order is paramount and who is very frustrated by the Congo natives. This is because the Congolese are seen as without any possibility of having an aptitude for numbers, or even an sense of order or logic. They are distractions for the Accountant, and cause him to call them “savages” and even to “hate them to death.”

Marlow is unwilling to fully commit to seeing “humanity” in the natives, but rather the only common bond between the Europeans and the Congolese natives is something “ugly” that is at the heart of human darkness. But he still goes on to say that the civility of his own culture may just be covered by a mask of proper behavior.

The evidence of racism evident in this work of Joseph Conrad may simply be reflecting the time and culture in which it was written. But the lack of Conrad presenting any truly alternatIve viewpoints to Marlow’s low opinion of these Africans leads one to believe that Conrad himself saw no Africans as intelligent civilized human beings.”

The Heart of Darkness Joseph Conrad. (2021, Apr 19). Retrieved from https://papersowl.com/examples/the-heart-of-darkness-joseph-conrad/

Heart of Darkness by Joseph Conrad