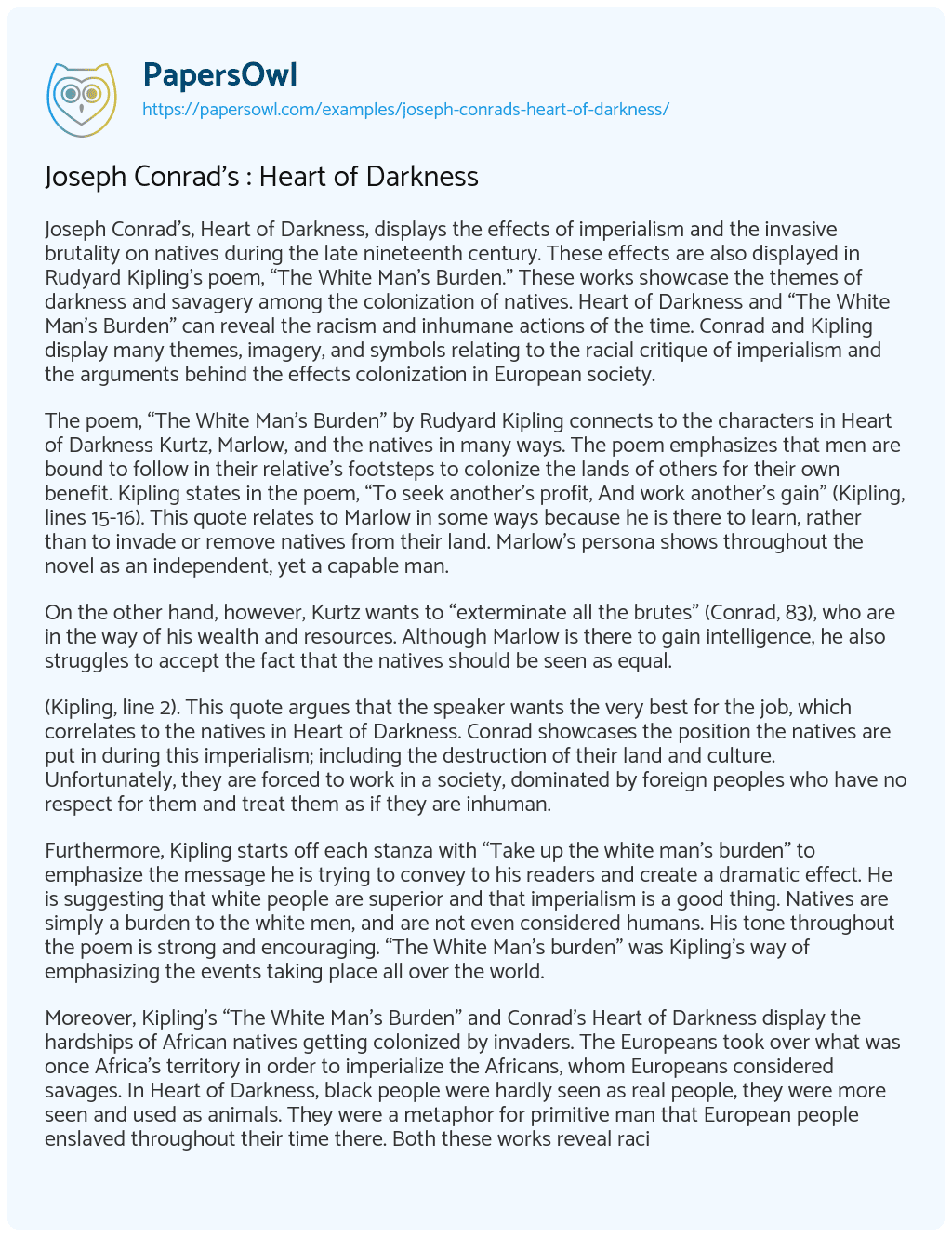 Joseph Conrad’s, Heart of Darkness, displays the effects of imperialism and the invasive brutality on natives during the late nineteenth century. These effects are also displayed in Rudyard Kipling’s poem, “The White Man’s Burden.” These works showcase the themes of darkness and savagery among the colonization of natives. Heart of Darkness and “The White Man’s Burden” can reveal the racism and inhumane actions of the time. Conrad and Kipling display many themes, imagery, and symbols relating to the racial critique of imperialism and the arguments behind the effects colonization in European society.

The poem, “The White Man’s Burden” by Rudyard Kipling connects to the characters in Heart of Darkness Kurtz, Marlow, and the natives in many ways. The poem emphasizes that men are bound to follow in their relative’s footsteps to colonize the lands of others for their own benefit. Kipling states in the poem, “To seek another’s profit, And work another’s gain” (Kipling, lines 15-16). This quote relates to Marlow in some ways because he is there to learn, rather than to invade or remove natives from their land. Marlow’s persona shows throughout the novel as an independent, yet a capable man.

On the other hand, however, Kurtz wants to “exterminate all the brutes” (Conrad, 83), who are in the way of his wealth and resources. Although Marlow is there to gain intelligence, he also struggles to accept the fact that the natives should be seen as equal.

(Kipling, line 2). This quote argues that the speaker wants the very best for the job, which correlates to the natives in Heart of Darkness. Conrad showcases the position the natives are put in during this imperialism; including the destruction of their land and culture. Unfortunately, they are forced to work in a society, dominated by foreign peoples who have no respect for them and treat them as if they are inhuman.

Furthermore, Kipling starts off each stanza with “Take up the white man’s burden” to emphasize the message he is trying to convey to his readers and create a dramatic effect. He is suggesting that white people are superior and that imperialism is a good thing. Natives are simply a burden to the white men, and are not even considered humans. His tone throughout the poem is strong and encouraging. “The White Man’s burden” was Kipling’s way of emphasizing the events taking place all over the world.

Moreover, Kipling’s “The White Man’s Burden” and Conrad’s Heart of Darkness display the hardships of African natives getting colonized by invaders. The Europeans took over what was once Africa’s territory in order to imperialize the Africans, whom Europeans considered savages. In Heart of Darkness, black people were hardly seen as real people, they were more seen and used as animals. They were a metaphor for primitive man that European people enslaved throughout their time there. Both these works reveal racism and torture during the late nineteenth century. The title Heart of Darkness has a literal and figurative meaning behind it. Conrad’s hidden meaning behind darkness is when Marlow refers to the “heart of the jungle” that eats away at his moral core and the fear that he will end up in this place of darkness.