The Literary Works of Joseph Conrad 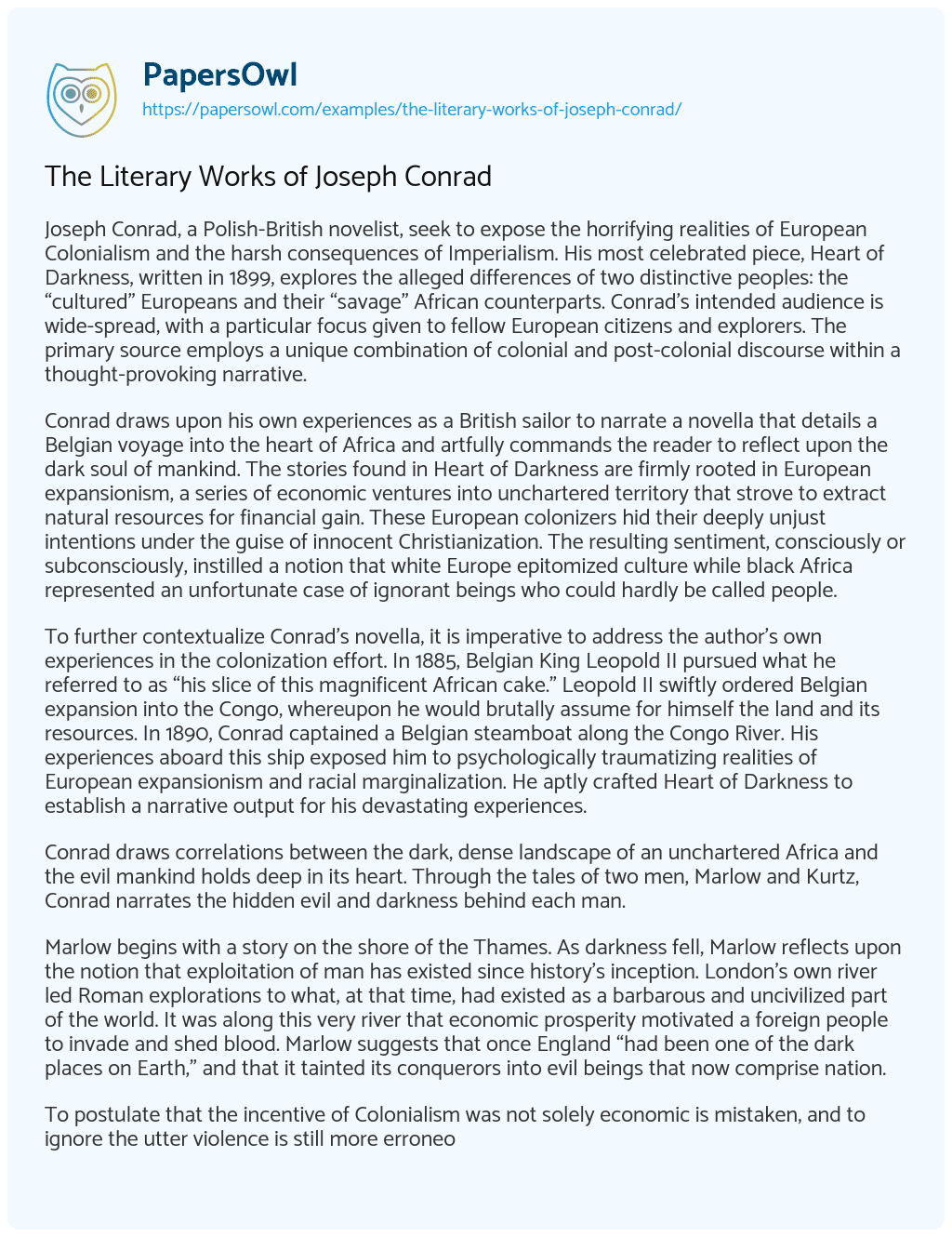 Joseph Conrad, a Polish-British novelist, seek to expose the horrifying realities of European Colonialism and the harsh consequences of Imperialism. His most celebrated piece, Heart of Darkness, written in 1899, explores the alleged differences of two distinctive peoples: the “cultured” Europeans and their “savage” African counterparts. Conrad’s intended audience is wide-spread, with a particular focus given to fellow European citizens and explorers. The primary source employs a unique combination of colonial and post-colonial discourse within a thought-provoking narrative.

Conrad draws upon his own experiences as a British sailor to narrate a novella that details a Belgian voyage into the heart of Africa and artfully commands the reader to reflect upon the dark soul of mankind. The stories found in Heart of Darkness are firmly rooted in European expansionism, a series of economic ventures into unchartered territory that strove to extract natural resources for financial gain. These European colonizers hid their deeply unjust intentions under the guise of innocent Christianization. The resulting sentiment, consciously or subconsciously, instilled a notion that white Europe epitomized culture while black Africa represented an unfortunate case of ignorant beings who could hardly be called people.

To further contextualize Conrad’s novella, it is imperative to address the author’s own experiences in the colonization effort. In 1885, Belgian King Leopold II pursued what he referred to as “his slice of this magnificent African cake.” Leopold II swiftly ordered Belgian expansion into the Congo, whereupon he would brutally assume for himself the land and its resources. In 1890, Conrad captained a Belgian steamboat along the Congo River. His experiences aboard this ship exposed him to psychologically traumatizing realities of European expansionism and racial marginalization. He aptly crafted Heart of Darkness to establish a narrative output for his devastating experiences.

Conrad draws correlations between the dark, dense landscape of an unchartered Africa and the evil mankind holds deep in its heart. Through the tales of two men, Marlow and Kurtz, Conrad narrates the hidden evil and darkness behind each man.

Marlow begins with a story on the shore of the Thames. As darkness fell, Marlow reflects upon the notion that exploitation of man has existed since history’s inception. London’s own river led Roman explorations to what, at that time, had existed as a barbarous and uncivilized part of the world. It was along this very river that economic prosperity motivated a foreign people to invade and shed blood. Marlow suggests that once England “had been one of the dark places on Earth,” and that it tainted its conquerors into evil beings that now comprise nation.

To postulate that the incentive of Colonialism was not solely economic is mistaken, and to ignore the utter violence is still more erroneous. Take, for instance, Marlow’s first impression of the Central Station. As the “word ‘ivory’ rang in the air… a taint of imbecile rapacity blew through it all, like a whiff from some corpse.” To the western man, ivory represents wealth and comfort. Used in pianos and billiard balls, the material was hardly necessary for survival. It existed as a social luxury and sucked Europeans into an avaricious world of social evil. Perhaps ivory is innately evil. It was for this commodity that much of Africa had been torn apart and its people slaughtered. It was to this material’s economic influence that the westerner bowed down. It was for this material’s extraction that African natives were slaughtered.

To further illustrate the evil doings of European expansion, Conrad presents the reader to Kurtz, the chief of the Inner Station. The British trader, who intended to bring civilization to the natives, quickly grew corrupted by an imperialist sentiment. Kurtz had fallen prey to the obsessive nature of prosperity and secured his position of influence on a foundation of evil and ivory. Time and space were stagnant in the jungle; the further Kurtz found himself from true civilization, the more his demons emerged. The tragic character plummets into a barbarous world of human sacrifice and cannibalism. Despite his descendance into madness, Kurtz was consistently referred to as a wonderful man, with a puzzling god-like veneration on behalf of the natives. His race to insanity culminates when it is revealed that Kurtz adorns his house with heads of his black victims. These adorations hold no financial benefit, and it becomes apparent that it is Kurtz’s lack of restraint, his giving into primal desires, that served as the impetus to such a display. The evening Kurtz escapes from the steamer, with hopes to return to the jungle, Marlow understood that “[he] had to deal with a being to whom [he] could not appeal in the name of anything high or low.” This fateful realization depicts the culmination of Kurtz’ mental demise and Marlow’s realization that the efforts of civilization breed devastation and evil.

Marlow also observes a connection between Kurtz’s mental state and his sexuality. In this primitive environment, Kurtz acquires a sexual freedom associated with the savagery of the uncivilized. A native woman, implied by Marlow to be Kurtz’s sexual partner, exemplifies the otherness of the African peoples. Her foreign qualities, though strikingly beautiful at first, encourage his lust and develops his impulsivity. She appears to embody the dangers inherent to the African wilderness.

Heart of Darkness deserves significant analysis. Conrad crafted a very well-written piece that evokes emotion and thought. I found the parallels between the uncivilized and madness utterly fascinating, and greatly enjoyed Conrad’s ability to implement effective symbolism. Without an astute reader’s careful examination, this piece effectively details the harsh climate of European colonialism and depicts the psychological trauma a witness may incur. Having delved deep into the psychological and symbolic intentions of Heart of Darkness, I cannot help but reflect upon the evil that may lie in my very heart as well.

It is clear that Conrad constructed Heart of Darkness in alignment with his own experiences in the Congo. Perhaps he is Marlow. Perhaps he is Kurtz. Perhaps he began as Marlow and became Kurtz. The author used this narration to release the traumas he experienced in the heart of darkness and prompts every reader to examine his or her own vices.

The Literary Works of Joseph Conrad. (2019, Jul 18). Retrieved from https://papersowl.com/examples/the-literary-works-of-joseph-conrad/