The Game of Allusion in Hearth of Darkness 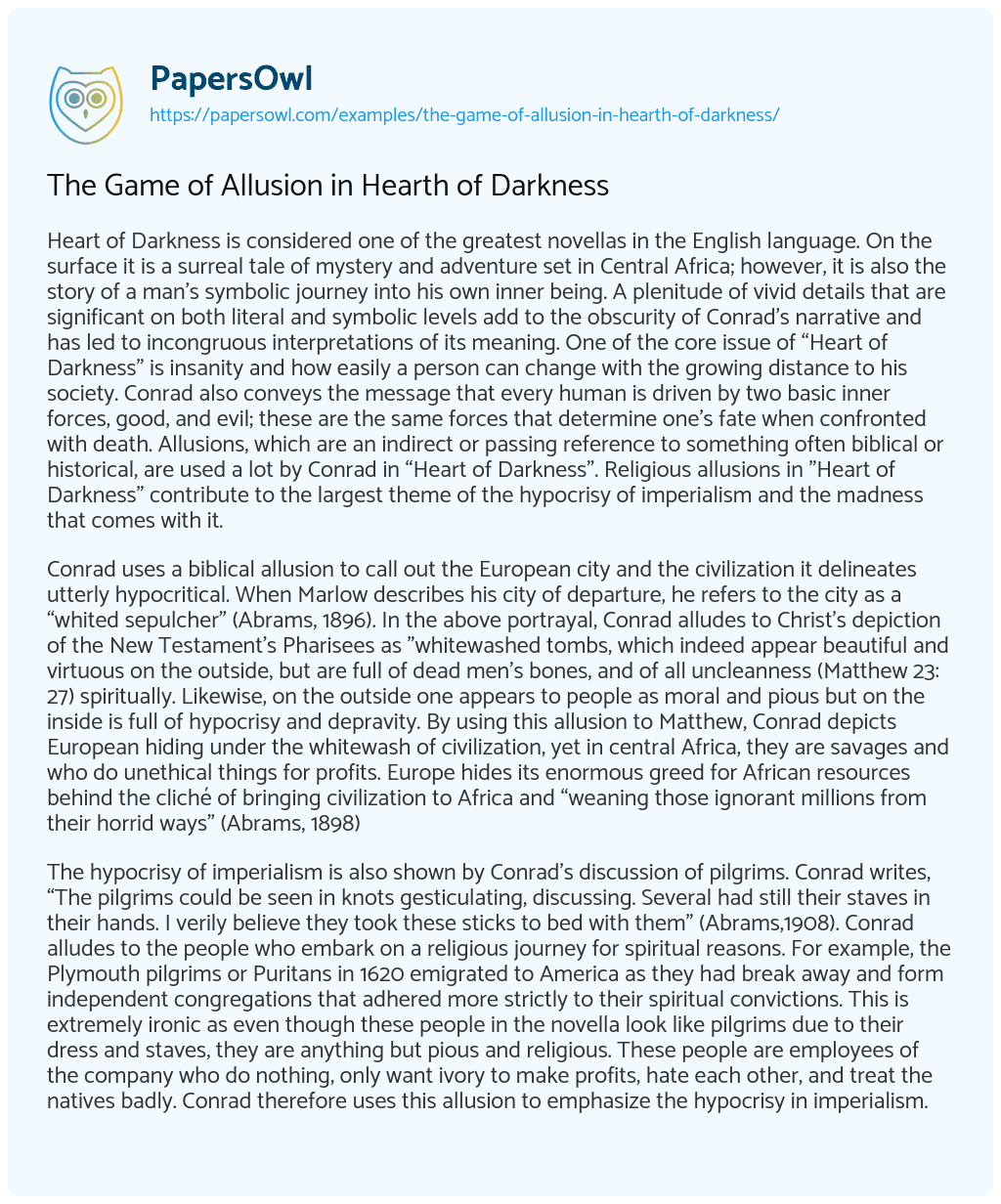 Heart of Darkness is considered one of the greatest novellas in the English language. On the surface it is a surreal tale of mystery and adventure set in Central Africa; however, it is also the story of a man’s symbolic journey into his own inner being. A plenitude of vivid details that are significant on both literal and symbolic levels add to the obscurity of Conrad’s narrative and has led to incongruous interpretations of its meaning. One of the core issue of “Heart of Darkness” is insanity and how easily a person can change with the growing distance to his society. Conrad also conveys the message that every human is driven by two basic inner forces, good, and evil; these are the same forces that determine one’s fate when confronted with death. Allusions, which are an indirect or passing reference to something often biblical or historical, are used a lot by Conrad in “Heart of Darkness”. Religious allusions in “Heart of Darkness” contribute to the largest theme of the hypocrisy of imperialism and the madness that comes with it.

Conrad uses a biblical allusion to call out the European city and the civilization it delineates utterly hypocritical. When Marlow describes his city of departure, he refers to the city as a “whited sepulcher” (Abrams, 1896). In the above portrayal, Conrad alludes to Christ’s depiction of the New Testament’s Pharisees as “whitewashed tombs, which indeed appear beautiful and virtuous on the outside, but are full of dead men’s bones, and of all uncleanness (Matthew 23: 27) spiritually. Likewise, on the outside one appears to people as moral and pious but on the inside is full of hypocrisy and depravity. By using this allusion to Matthew, Conrad depicts European hiding under the whitewash of civilization, yet in central Africa, they are savages and who do unethical things for profits. Europe hides its enormous greed for African resources behind the cliché of bringing civilization to Africa and “weaning those ignorant millions from their horrid ways” (Abrams, 1898)

The hypocrisy of imperialism is also shown by Conrad’s discussion of pilgrims. Conrad writes, “The pilgrims could be seen in knots gesticulating, discussing. Several had still their staves in their hands. I verily believe they took these sticks to bed with them” (Abrams,1908). Conrad alludes to the people who embark on a religious journey for spiritual reasons. For example, the Plymouth pilgrims or Puritans in 1620 emigrated to America as they had break away and form independent congregations that adhered more strictly to their spiritual convictions. This is extremely ironic as even though these people in the novella look like pilgrims due to their dress and staves, they are anything but pious and religious. These people are employees of the company who do nothing, only want ivory to make profits, hate each other, and treat the natives badly. Conrad therefore uses this allusion to emphasize the hypocrisy in imperialism.

Conrad uses another biblical allusion to show the hypocrisy of imperialism. As the Eldorado Exploring Expedition passes through one of the stations where Marlow stops, Conrad writes, “It came in sections during the next three weeks, each section headed by a donkey carrying a white man in new clothes and tan shoes, bowing from that elevation right and left to the impressed pilgrims” (Abrams, 1911). Conrad alludes to the triumphal entry into Jerusalem on a donkey as he depicts an image of a noteworthy and potent figure entering to the admiration of the people. Jesus was going to Jerusalem to save the people of Israel by sacrificing Himself. However, Conrad gives more description that discloses the magnitude of greed and wickedness that these people have inside of them. Conrad describes, ““This devoted band called itself the Eldorado Exploring Expedition, and I believe they were sworn to secrecy… to tear treasure out of the bowels of the land was their desire, with no more moral purpose at the back of it than there is in burglars breaking into a safe” (Abrams, 1912). Conrad uses this allusion to accentuate the hypocrisy of imperialism; the white men looked like saviors but their sole intention is to steal and plunder Africa of its treasures for profit.

Conrad alludes to Roman religion to show the insanity that comes with imperialism and having too much power. Conrad writes. ““Some of the pilgrims behind the stretcher carried his arms—two shot-guns, a heavy rifle, and a light revolver-carbine—the thunderbolts of that pitiful Jupiter” (Abrams, 1934). Kurtz is being seen as the Roman god Jupiter who is the god of the sky, thunder, and was king of all gods. Conrad is describing how Kurtz has become insane with power; Kurtz has become a god in the jungle but is cruel, merciless, and exploits the natives. Jupiter was also a god of justice as romans used to swear to him when taking oaths. Conrad clearly divulges the hypocrisy and madness behind imperialism as Kurtz is obsessed with power.

The Game of Allusion in Hearth of Darkness. (2021, Jul 05). Retrieved from https://papersowl.com/examples/the-game-of-allusion-in-hearth-of-darkness/