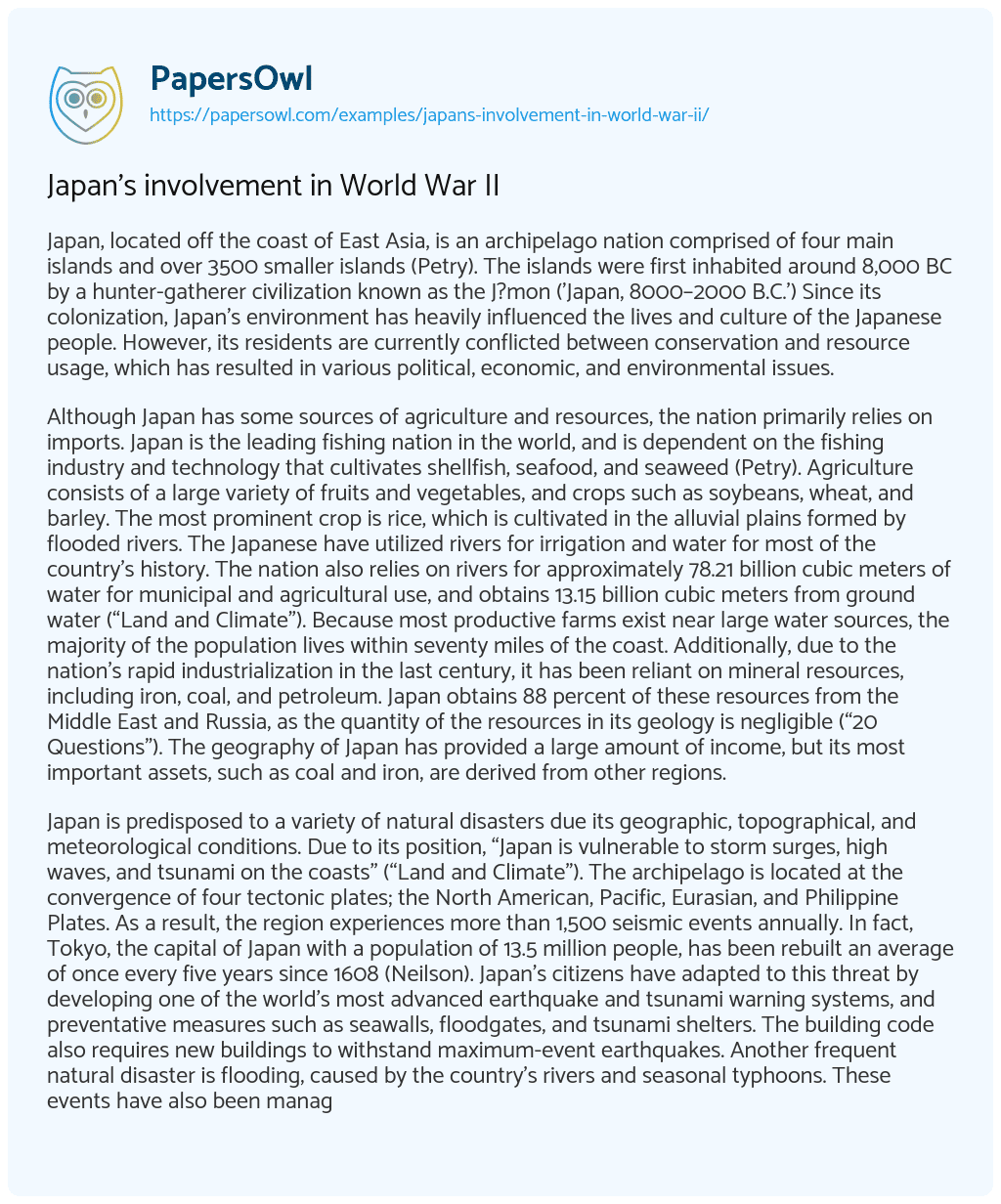 Japan, located off the coast of East Asia, is an archipelago nation comprised of four main islands and over 3500 smaller islands (Petry). The islands were first inhabited around 8,000 BC by a hunter-gatherer civilization known as the J?mon (‘Japan, 8000–2000 B.C.’) Since its colonization, Japan’s environment has heavily influenced the lives and culture of the Japanese people. However, its residents are currently conflicted between conservation and resource usage, which has resulted in various political, economic, and environmental issues.

Although Japan has some sources of agriculture and resources, the nation primarily relies on imports. Japan is the leading fishing nation in the world, and is dependent on the fishing industry and technology that cultivates shellfish, seafood, and seaweed (Petry). Agriculture consists of a large variety of fruits and vegetables, and crops such as soybeans, wheat, and barley. The most prominent crop is rice, which is cultivated in the alluvial plains formed by flooded rivers. The Japanese have utilized rivers for irrigation and water for most of the country’s history. The nation also relies on rivers for approximately 78.21 billion cubic meters of water for municipal and agricultural use, and obtains 13.15 billion cubic meters from ground water (“Land and Climate”). Because most productive farms exist near large water sources, the majority of the population lives within seventy miles of the coast. Additionally, due to the nation’s rapid industrialization in the last century, it has been reliant on mineral resources, including iron, coal, and petroleum. Japan obtains 88 percent of these resources from the Middle East and Russia, as the quantity of the resources in its geology is negligible (“20 Questions”). The geography of Japan has provided a large amount of income, but its most important assets, such as coal and iron, are derived from other regions.

Japan is predisposed to a variety of natural disasters due its geographic, topographical, and meteorological conditions. Due to its position, “Japan is vulnerable to storm surges, high waves, and tsunami on the coasts” (“Land and Climate”). The archipelago is located at the convergence of four tectonic plates; the North American, Pacific, Eurasian, and Philippine Plates. As a result, the region experiences more than 1,500 seismic events annually. In fact, Tokyo, the capital of Japan with a population of 13.5 million people, has been rebuilt an average of once every five years since 1608 (Neilson). Japan’s citizens have adapted to this threat by developing one of the world’s most advanced earthquake and tsunami warning systems, and preventative measures such as seawalls, floodgates, and tsunami shelters. The building code also requires new buildings to withstand maximum-event earthquakes. Another frequent natural disaster is flooding, caused by the country’s rivers and seasonal typhoons. These events have also been managed through several flood mitigation measures, but has become increasingly difficult with the expansion of urban property into floodplains.

Since World War II, Japan has rapidly industrialized and developed infrastructure. Consequently, there are two prominent issues in Japan’s environment, which are pollution and the loss of biodiversity. With the increase in industrial manufacturing, a large amount of pollutants have been dispelled into the environment. Also, most factories are built on the waterfront to increase efficiency, so most pollution is concentrated into coastal areas, near the majority of Japan’s population and its sources of agriculture (“Japanese”). In addition to chemical pollution, urban areas produce a large amount of noise, light, and air pollution, and contaminate the soil in the surrounding land. As a result of these environmental changes, the biodiversity of both aquatic and land species has considerably decreased, which has affected some aspects of Japan’s economy. While Japan has attempted to improve environmental standards, minimize urban sprawl, and prevent overharvesting, “protection of biodiversity within and outside protected areas has not been sufficient to significantly reduce the rate of biodiversity loss”. Japan has a high share of endemic species, and nearly a quarter of mammal species and a third of freshwater fish species face extinction. Also, the area of farmland has continuously diminished, due to residential and commercial development (“OECD”). In recent years, the Japanese government has attempted to recover the environmental impacts through several administrations and policies. The most prominent organizations are the Kyoto Protocol, an international agreement to set emission reduction targets, and the Organization for Economic Cooperation and Development (OECD). There are also movements within Japan’s government. In fact, “Prime Minister Yukio Hatoyama announced a target of reducing greenhouse gas emissions by 25% by 2020” (“Japan’s Initiatives”). The government has strongly supported the development and application of clean and renewable technology, which became important after the closing of Japan’s nuclear reactors after the Fukushima disaster in 2011. Currently, the primary goals of the country’s policies are to reduce air emissions, water usage, and municipal waste generation (Smith).

Although the environment of Japan is relatively unsuitable, its citizens have managed to adapt and thrive. The recent initiatives to improve the conditions of the environmental impacts have been successful, and will continue to reverse the effects of the nation’s rapid industrialization. Soon, the country will be able to benefit further from its consonance with the environment, as it had in the past.

Differences between the US and Japan