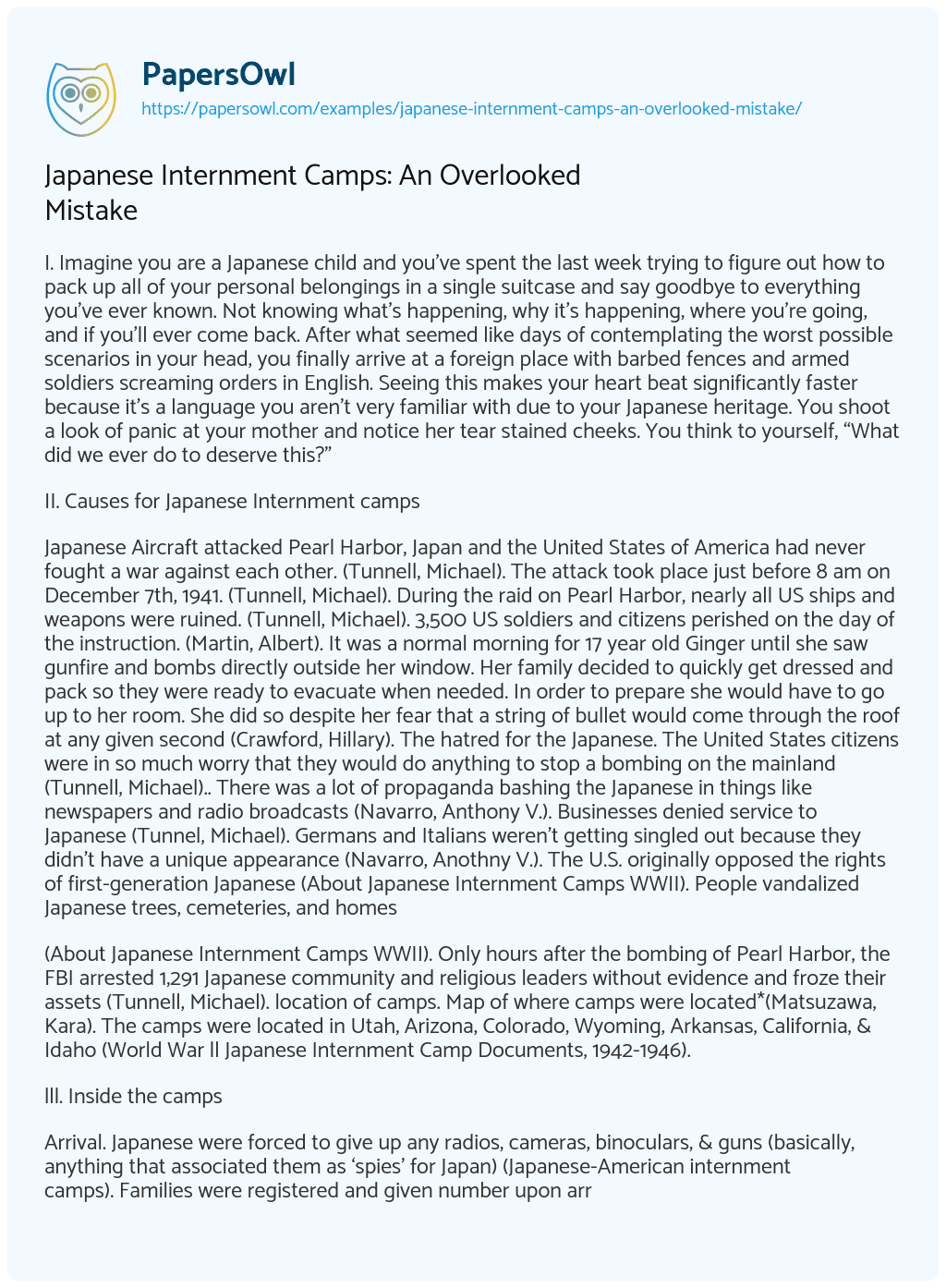 I. Imagine you are a Japanese child and you’ve spent the last week trying to figure out how to pack up all of your personal belongings in a single suitcase and say goodbye to everything you’ve ever known. Not knowing what’s happening, why it’s happening, where you’re going, and if you’ll ever come back. After what seemed like days of contemplating the worst possible scenarios in your head, you finally arrive at a foreign place with barbed fences and armed soldiers screaming orders in English. Seeing this makes your heart beat significantly faster because it’s a language you aren’t very familiar with due to your Japanese heritage. You shoot a look of panic at your mother and notice her tear stained cheeks. You think to yourself, “What did we ever do to deserve this?”

Japanese Aircraft attacked Pearl Harbor, Japan and the United States of America had never fought a war against each other. (Tunnell, Michael). The attack took place just before 8 am on December 7th, 1941. (Tunnell, Michael). During the raid on Pearl Harbor, nearly all US ships and weapons were ruined. (Tunnell, Michael). 3,500 US soldiers and citizens perished on the day of the instruction. (Martin, Albert). It was a normal morning for 17 year old Ginger until she saw gunfire and bombs directly outside her window. Her family decided to quickly get dressed and pack so they were ready to evacuate when needed. In order to prepare she would have to go up to her room. She did so despite her fear that a string of bullet would come through the roof at any given second (Crawford, Hillary). The hatred for the Japanese. The United States citizens were in so much worry that they would do anything to stop a bombing on the mainland (Tunnell, Michael).. There was a lot of propaganda bashing the Japanese in things like newspapers and radio broadcasts (Navarro, Anthony V.). Businesses denied service to Japanese (Tunnel, Michael). Germans and Italians weren’t getting singled out because they didn’t have a unique appearance (Navarro, Anothny V.). The U.S. originally opposed the rights of first-generation Japanese (About Japanese Internment Camps WWII). People vandalized Japanese trees, cemeteries, and homes

lll. Inside the camps

Housing. Internment camps were initially race tracks and the small ‘apartments’ in which the Japanese-Americans were held used to be where they kept animals like horses, pigs, & cows (Tunnel, Michael). Housing was built quickly and last minute so quality was low (Tunnel, Michael). Living spaces were a 20 by a 10-foot stall with no closets, cupboards, or any furniture but with army cots to sleep (Tunnel, Michael).

Schooling in camps. After two months in the camps, children were granted the right to receive a low-quality education (Jones, P.). Within no time children were allowed to play outside for recess. (Jones, P.) In the school kids were mostly taught chores around camps but occasionally taught reading and writing (Jones. P). Children were always allowed to write letters. An extremely compassionate librarian would constantly write them letters back from California. The woman also sent them treats like candy through the mail. She asked them how they were doing and was very kind to them. They both would get extremely overjoyed to write each other back (Jones, P.).

Family life in camps. The policy for the camps was that you could not separate families and everyone in the family would stay in the same room (Purtill, Corinne). The Internment camps forced young Japanese descent children to speak & learn English. After the Japanese were released children could not verbally speak to parents and Japanese elders (Purtill, Corinne). One Japanese father hung himself due to the fact that he couldn’t talk to his son, Kaito (Tunnell, Micheal). All families were given chores that had to be completed by the end of each day (At home life of prisoners).

Forgiveness. Almost 45 years (1988) after the war ended President Reagan signed the Civil Rights Liberties Act that gave $20,000 to more than 100,000 Japanese decedents who’s elders of some sort that were incarcerated in the internment camps during WWII (Qureshi, Bilal). President Ford made an announcement that the Japanese Internment Camps were a national ‘Mistake’ and should not have happened in the first place (Abbott, Franky). Now all of the Internment camps are historical landmarks that U.S. citizens may visit to educate themselves on the events of the past (Abbott, Franky and Digital Public Library of America). ‘Finally getting out of the camps was a great day. It felt so good to get out of the gates, and just know that you were going home…finally. Home wasn’t where I left it though. Getting back, I was just shocked to see what had happened, our home being bought by a different family, different decorations in the windows; it was our house, but it wasn’t anymore. It hurt not being able to return home, but moving into a new home helped me I believe. I think it helped me to bury the past a little, to, you know, move on from what had happened.’ – Aya Nakamura (Japanese Internment Camp Survivors: In Their Own Words)

V. Everyone can easily recognize the concentration camps in Germany as evil and unexplainable, but what many people fail to do is realize that the United States was doing something disturbingly similar. As we are drawing much needed attention to the sad reality of America’s actions during World War 2, all we ask that you take from this presentation is simply grasping that this significant piece of history should no longer be overlooked but taken responsibility for. Not only by acknowledging our racist wrongdoings but growing and learning from them to be confident history doesn’t repeat itself in years to come.