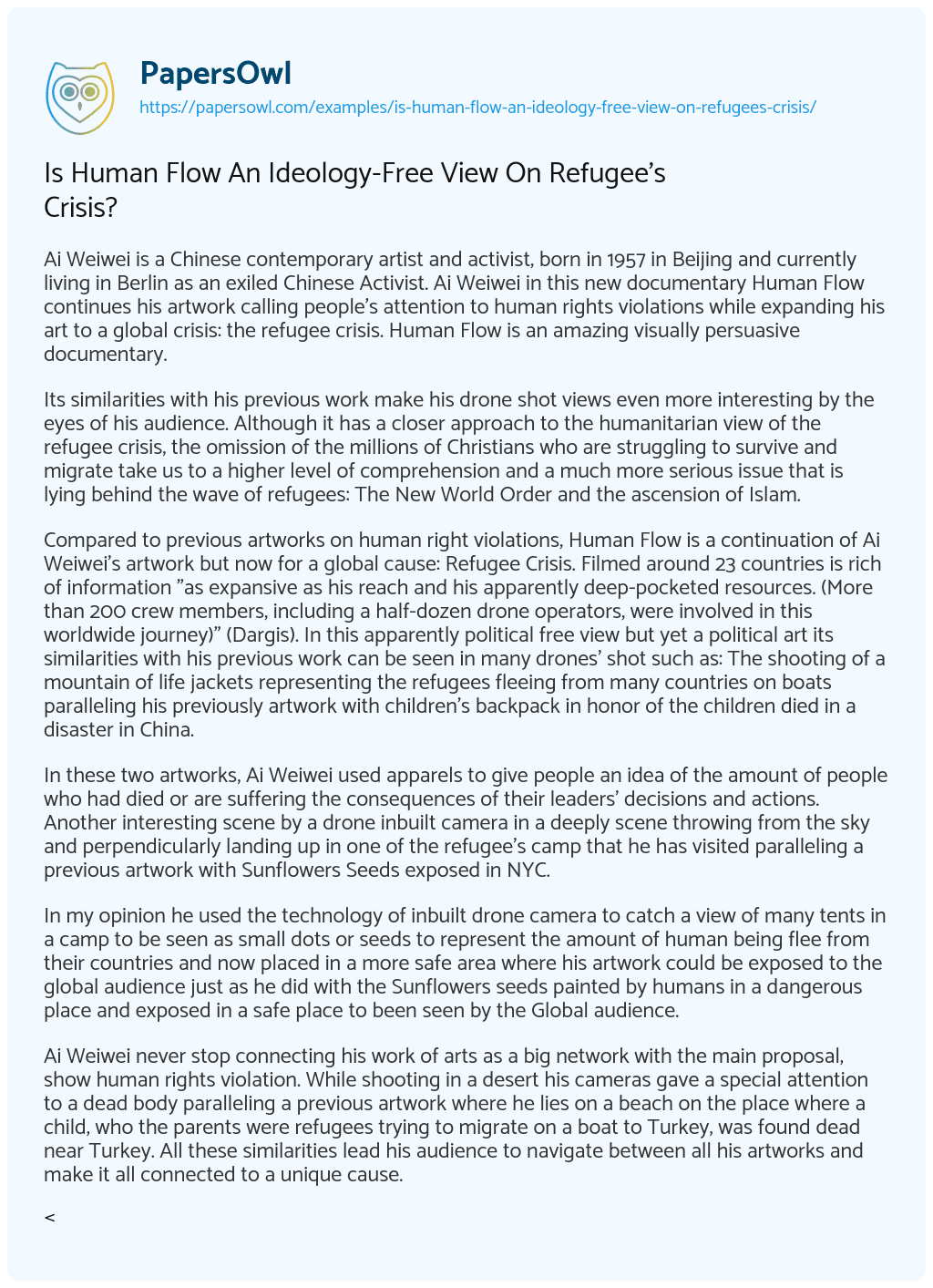 Ai Weiwei is a Chinese contemporary artist and activist, born in 1957 in Beijing and currently living in Berlin as an exiled Chinese Activist. Ai Weiwei in this new documentary Human Flow continues his artwork calling people’s attention to human rights violations while expanding his art to a global crisis: the refugee crisis. Human Flow is an amazing visually persuasive documentary.

Its similarities with his previous work make his drone shot views even more interesting by the eyes of his audience. Although it has a closer approach to the humanitarian view of the refugee crisis, the omission of the millions of Christians who are struggling to survive and migrate take us to a higher level of comprehension and a much more serious issue that is lying behind the wave of refugees: The New World Order and the ascension of Islam.

Compared to previous artworks on human right violations, Human Flow is a continuation of Ai Weiwei’s artwork but now for a global cause: Refugee Crisis. Filmed around 23 countries is rich of information “as expansive as his reach and his apparently deep-pocketed resources. (More than 200 crew members, including a half-dozen drone operators, were involved in this worldwide journey)” (Dargis). In this apparently political free view but yet a political art its similarities with his previous work can be seen in many drones’ shot such as: The shooting of a mountain of life jackets representing the refugees fleeing from many countries on boats paralleling his previously artwork with children’s backpack in honor of the children died in a disaster in China.

In these two artworks, Ai Weiwei used apparels to give people an idea of the amount of people who had died or are suffering the consequences of their leaders’ decisions and actions. Another interesting scene by a drone inbuilt camera in a deeply scene throwing from the sky and perpendicularly landing up in one of the refugee’s camp that he has visited paralleling a previous artwork with Sunflowers Seeds exposed in NYC.

In my opinion he used the technology of inbuilt drone camera to catch a view of many tents in a camp to be seen as small dots or seeds to represent the amount of human being flee from their countries and now placed in a more safe area where his artwork could be exposed to the global audience just as he did with the Sunflowers seeds painted by humans in a dangerous place and exposed in a safe place to been seen by the Global audience.

Ai Weiwei never stop connecting his work of arts as a big network with the main proposal, show human rights violation. While shooting in a desert his cameras gave a special attention to a dead body paralleling a previous artwork where he lies on a beach on the place where a child, who the parents were refugees trying to migrate on a boat to Turkey, was found dead near Turkey. All these similarities lead his audience to navigate between all his artworks and make it all connected to a unique cause.

By Filming many refugees’ camp around the World Ai Weiwei not only put us in a more humanitarian view of this global crisis but also opens our view about others issue around this subject. Ai Weiwei said “We visited about 23 nations, 40 camps, and interviewed about 600 people, and has 900 hours of footage” to bring us more closely to the refugees than we could be by watching News.

Human Flow drags us into the scenes where many shocking moments of a refugee daily life “can make your tears fall down like the showers that are British” (One Direction). He incorporates some information along the scenes such as:  “More than 65 million people have been forcibly displaced from their homes, the highest number since the end of The World War II” Human Flow. Although I felt very emotionally touched as I keep watching one question was keep knocking mine mind “Where are the Christians refugee?”

To answer some questions raised while I was watching Human Flow I did a brief online research on this topic and I found some interesting information’s on refugee’s crisis. Such as: “The BBC says that ten percent of all Syrians are Christian, which would mean 2.2 million Christians…So how is it that one half of one percent of the Syrian refugees we’ve admitted are Christian, or 56, instead of about 1,000 out of 10,801–or far more?”(Abrams) and in another article in an interview done by Stuart Anderson, “Trump Admits Only 23 Christian Refugees from Mideast in 2018”, Trump said “If you were a Muslim you could come in. But if you were a Christian it was almost impossible.

And the reason that was so unfair is that everybody was persecuted in all fairness, they were chopping the heads off of everybody, but more so the Christians, and I thought it was very, very unfair. So we are going to help them.” The absence of Christian’s refugees on this documentary clearly supports these claims.

Ai Weiwei indirectly exposed the political and religious issues that make refugee crisis bigger than ever before. The text incorporated on Human Flow continues to pop up. Such as “Beginning in 2015, European countries started closing their borders to refugees, stranding tens of thousands in Greece” Human Flow. By watching Human Flow I found that it is actually impossible to talk about refugees crisis and don’t think about its political and religious ideologies. On one hand we have thousands of refugees living in poverty, on the other hand, we see the host people across countries borders afraid of these refugees religious ideology change their countries system.

The optimist view of Ai Weiwei is evident in a quote from Nazim Hokmet, Turkish poet, incorporated into this documentary, “I want the right, of life of the leopard at spring, of the seed, splitting open- I want the right of the first man.” Human Flow, has reached its limit. Based in my own experience by watching TV news, online news, video documentaries and online articles the reason why some countries are beginning closing their borders is that their systems are collapsing after they have accepted a mass of refugees.

Ai Weiwei finally shows the political ideology hidden behind religious systems. By showing the evidence not only in texts incorporated along the scenes but also in interviews with public people whatever he traveled to. A Quote from The Dhammapada, Buddhist Scripture, “Neither in the Sky nor in mid-ocean, nor by entering into mountain clefts, nowhere in the world is there a place where one may escape from the results of Evil deeds” Human Flow made me strongly believe its quotes support my view that it doesn’t matter where humans are migrating to, if they don’t leave their ideology in the past the humanity will never live in peace and Ai Weiwei continues to reinforced this idea in an interview with Walid Joumblatt a Druze Leader in Human Flow.

He said “not to think about the past…to see the future and to forget old hate because somewhere in our subconscious we hate each other…We have at any price compromise that love is important in life, much more important than anything. In this world of totally uncertain, nobody knows I don’t think somebody knows where this World is going on.” In this interview Ai Weiwei calls its global audience to reflect on this humanitarian crisis and rethink about where human ideologies are taking humanity. I believe above all, the most important message in this documentary is to call humanity to love each other, have more compassion and to free itself from harmful ideologies.

Human Flow is more than a political art. It is the essence of life. Although he focuses on a specific group of refugee it is an inspiration to live in peace still. In somehow, it is also an omission of the political ideologies, hidden behind ‘religious’, which is the cause of human poverty. I can’t ignore that Ai Weiwei wants to call attention on refugee’s crisis confronting people around the world and showing that it is not only a global crisis but also the biggest human rights violation. In addition, Human Flow is not an intention to solve the refugee’s crisis, instead of the main proposal of the Artist lying on a question “Will our global society emerge from fear, isolation, and self-interest and choose a path of openness, freedom, and respect for humanity?” (Ai Weiwei).

Is Human Flow An Ideology-Free View On Refugee's Crisis?. (2019, Dec 10). Retrieved from https://papersowl.com/examples/is-human-flow-an-ideology-free-view-on-refugees-crisis/