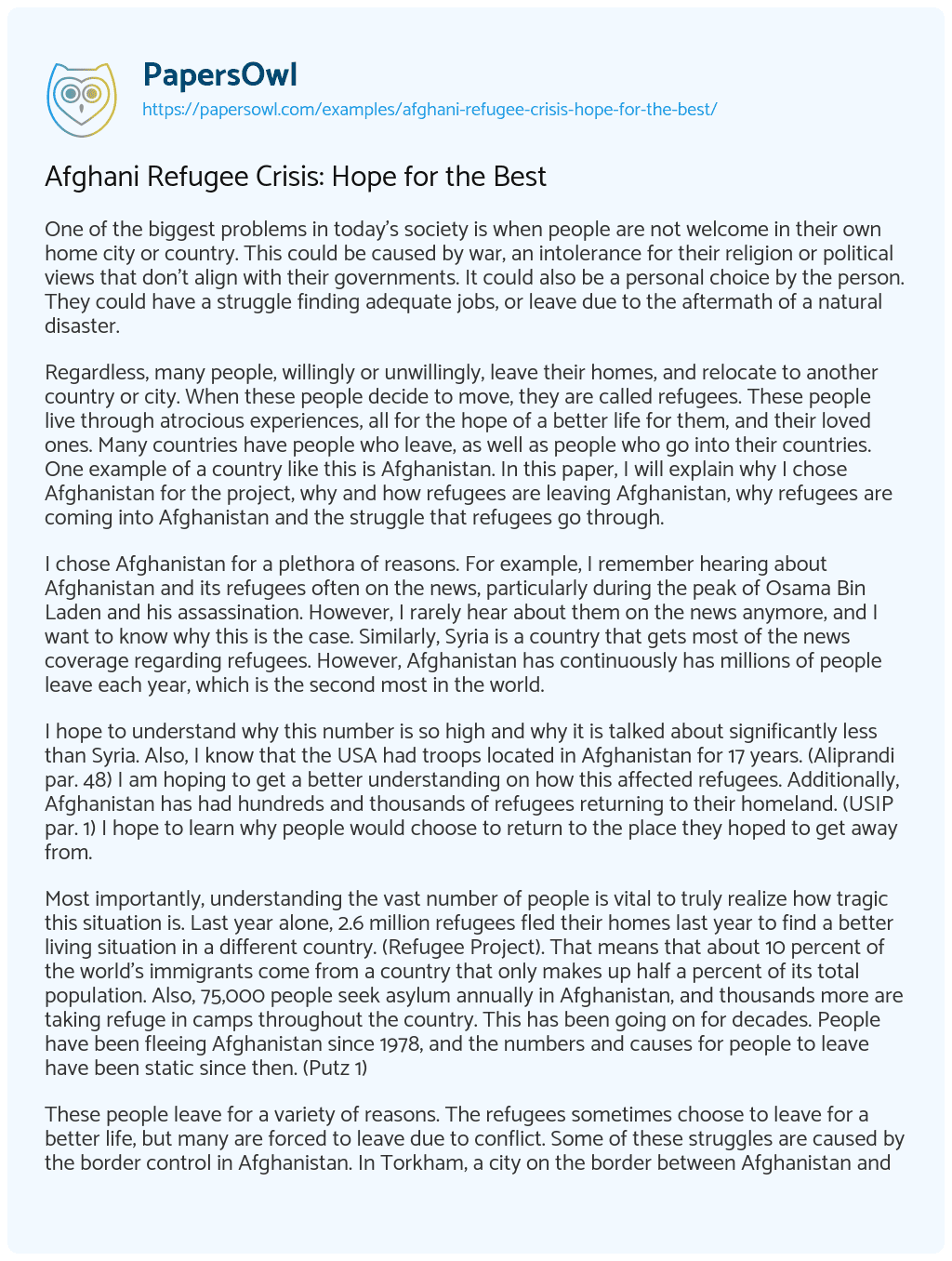 One of the biggest problems in today’s society is when people are not welcome in their own home city or country. This could be caused by war, an intolerance for their religion or political views that don’t align with their governments. It could also be a personal choice by the person. They could have a struggle finding adequate jobs, or leave due to the aftermath of a natural disaster.

Regardless, many people, willingly or unwillingly, leave their homes, and relocate to another country or city. When these people decide to move, they are called refugees. These people live through atrocious experiences, all for the hope of a better life for them, and their loved ones. Many countries have people who leave, as well as people who go into their countries. One example of a country like this is Afghanistan. In this paper, I will explain why I chose Afghanistan for the project, why and how refugees are leaving Afghanistan, why refugees are coming into Afghanistan and the struggle that refugees go through.

I chose Afghanistan for a plethora of reasons. For example, I remember hearing about Afghanistan and its refugees often on the news, particularly during the peak of Osama Bin Laden and his assassination. However, I rarely hear about them on the news anymore, and I want to know why this is the case. Similarly, Syria is a country that gets most of the news coverage regarding refugees. However, Afghanistan has continuously has millions of people leave each year, which is the second most in the world.

I hope to understand why this number is so high and why it is talked about significantly less than Syria. Also, I know that the USA had troops located in Afghanistan for 17 years. (Aliprandi par. 48) I am hoping to get a better understanding on how this affected refugees. Additionally, Afghanistan has had hundreds and thousands of refugees returning to their homeland. (USIP par. 1) I hope to learn why people would choose to return to the place they hoped to get away from.

Most importantly, understanding the vast number of people is vital to truly realize how tragic this situation is. Last year alone, 2.6 million refugees fled their homes last year to find a better living situation in a different country. (Refugee Project). That means that about 10 percent of the world’s immigrants come from a country that only makes up half a percent of its total population. Also, 75,000 people seek asylum annually in Afghanistan, and thousands more are taking refuge in camps throughout the country. This has been going on for decades. People have been fleeing Afghanistan since 1978, and the numbers and causes for people to leave have been static since then. (Putz 1)

These people leave for a variety of reasons. The refugees sometimes choose to leave for a better life, but many are forced to leave due to conflict. Some of these struggles are caused by the border control in Afghanistan. In Torkham, a city on the border between Afghanistan and Pakistan, the border security has been increased. (United Nations Par. 4) They are now required to have passports and visas to pass through the border. This has affected thousands of people, who are forced to make the tough decision of whether to stay in Afghanistan or permanently move to Pakistan. Many end up choosing to leave due to their business pursuits, or having family in Pakistan.

The state of Afghanistan is overwhelmed with its role the refugee crisis as well. Afghanistan is having to issue 2,000 passports daily. (Malikyar par 12) 8,000 people are recorded leaving western Afghanistan to go to Iran every day, and thousands more leave unrecorded. Also, many people are hoping to seek asylum in Europe. It is becoming more accessible for many Afghanis to seek refuge in this area. For example, Germany has decreased the cost of asylum from $10,000 to $4,000. (Par. 13) This decrease, although beneficial to many, is still hard on Afghanis, because the GDP of Afghanistan is about only a meager $800 per capita. (Aliprandi Par. 24)

Even though millions of people are leaving Afghanistan, thousand of people come to Afghanistan as well. Surveys conducted involving Afghan refugees show that the main reason for returning Afghanistan was economic hardship. (United Nations par. 2) The next most common causes for fleeing are harassment and fear of arrest/deportation. These refugees are never truely accepted into the communities they attempt to join, both economically and socially.

They are also living in a constant fear, because many of them do not have passports and visas, and crossed the borders illegally. Even though 75 percent of the refugees who return say they made the right decision, 72 percent of the returning refugees says they have been displaced at least twice. (par. 7, Mcveigh par. 3) This shows that the majority of refugees are constantly moving, looking for a better life, only to be turned down and reverting back to the original circumstance. Also, many Afghani refugees who have been living abroad for decades are being forced to return as well.

Pakistan has continually set dates on which all Afghanis have to leave, but they continue to extend the timeframe (DW par. 3-4) Pakistan has said it “has carried the burden of hosting Afghan refugees since long and in the present circumstances cannot sustain it any further.” (Par. 5) Hundreds of thousands of people have established full lives in Pakistan, building families and businesses there. Jamil Khan Azizi said that returning to Afghanistan is “like a whole new migration” as everything he considers his livelihood, such as his business is in Pakistan. (Par. 17-18) These short term and long term struggles on returning to Afghanistan can hold many of the same issues as trying to leave Afghanistan.

Although the statistics give an effective understanding of the crisis, interviews with refugees are able to truly capture the essence of the situation. Many Afghans go to Europe and nearby Middle Eastern countries, but a large amount choose to go to Australia. (Pannett par. 1) This is a route of many stops that leads them through Southeast Asia. One of these stops is Indonesia. The following interviews take place in Indonesia with Afghani refugees on their way to Australia. Shakila Muradi is a 30 year old Afghani women, who is married and has children.

She said that one of the main reasons she wanted to move is so that her young daughter can be raised in a society in which women have equal rights to men. Afghanistan is a country that has one of the most unequal gaps between men and women. Also, her husband had a small grocery store in Afghanistan, which was looted by the Taliban twice. (Par. 5) This caused him to lose over 10 thousand dollars worth of goods. Due to the circumstances of their life in Afghanistan, they decided it was time to move on. They sold all of their home, business and possessions and flew to New Delhi, India. (Par. 6)

Soon after, Mrs. Muradi and her children flew to Malaysia using fake passports. (Par. 7) She had to wait several months for her husband, as his documents were not ready. They boated to Indonesia, and were ready to make the last trip from Indonesia to Australia. (Par. 8) Tragically, they were left by their travel agent, whom they had already paid 10,000 dollars. Currently, they are stuck in Indonesia, and having wasted the remainder of their life savings on a scam, and have no way to regain it. Another refugee at this camp is Mohammad Faiz.

Mohammad is a 33 year old man who had been working as an interpreter for US troops. During his time as an interpreter, several of his interpreter-colleagues were murdered by the Taliban. He said his life “felt like [he] was in a horror movie.” (Par. 12) One day, one of his friends forwarded him an article. (Par. 13) It was a study of the happiest nations, and Australia was considered the happiest. At that moment, he decided Australia was where he should be. He left behind his past life, including wife, and flew away from the place he had considered his homeland his entire life. (Par. 14) Now in Indonesia, he is only one step away from being a resident of the world’s happiest country.

In conclusion, Afghani refugees, although not shown in mainstream media, are prevalent, and many of them go through similar struggles such as economic hardship and harassment. Many refugees also end up returning to Afghanistan for many of the same reasons that they left. Many of the countries do not want to accept these refugees, and never accept them, forcing them to return home. Leaving Afghanistan and seeking asylum somewhere else is a dangerous, illegal, and risky activity, but many people choose to take that risk.

I now have a greater understanding of how truly horrific the lives of these refugees are, and the struggles they go through are undoubtedly more complex than the struggles I go through in my daily life. The stories that I read of people of peoples lives’ are stories that I can hardly even imagining experiencing, but for many refugees, it is their life. Researching what these refugees go through makes me even more open to accepting them into our country.

These people are trying to do their best to survive, and they aspire the best, happiest, and safest possible lives for them and their families. And in my opinion, it is truly unjust for anyone to get in the way of that.. Mohammad Faiz, a refugee who is just miles away from living his dream life, says that “Everyone is worried about the future.” (Pannett par. 13) Even though, this may be the case, we must maintain hope. The Afghan refugee crisis, a cruel reality for millions, does seem to be here to stay, but we must do our best to fix that.