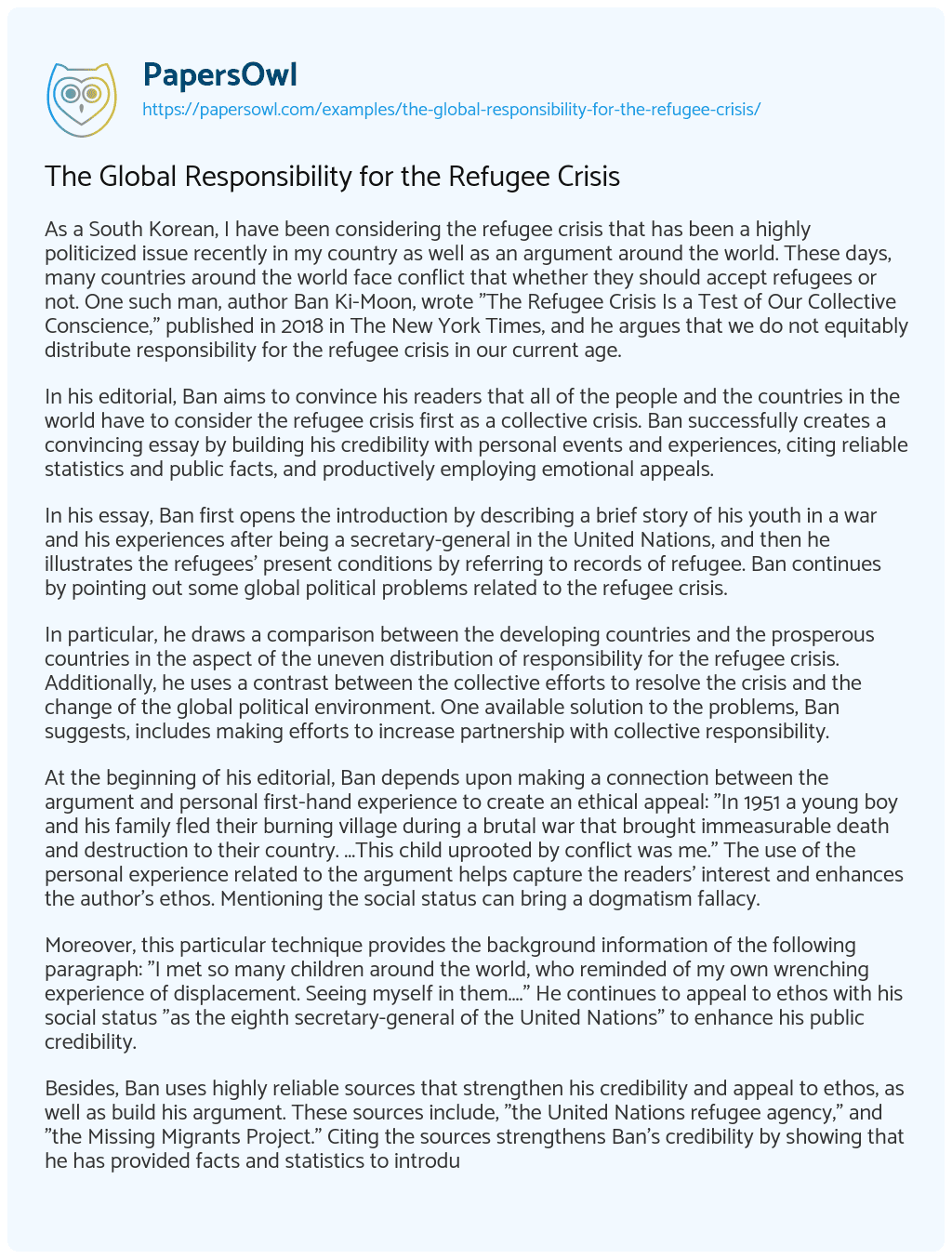 As a South Korean, I have been considering the refugee crisis that has been a highly politicized issue recently in my country as well as an argument around the world. These days, many countries around the world face conflict that whether they should accept refugees or not. One such man, author Ban Ki-Moon, wrote “The Refugee Crisis Is a Test of Our Collective Conscience,” published in 2018 in The New York Times, and he argues that we do not equitably distribute responsibility for the refugee crisis in our current age.

In his editorial, Ban aims to convince his readers that all of the people and the countries in the world have to consider the refugee crisis first as a collective crisis. Ban successfully creates a convincing essay by building his credibility with personal events and experiences, citing reliable statistics and public facts, and productively employing emotional appeals.

In his essay, Ban first opens the introduction by describing a brief story of his youth in a war and his experiences after being a secretary-general in the United Nations, and then he illustrates the refugees’ present conditions by referring to records of refugee. Ban continues by pointing out some global political problems related to the refugee crisis.

In particular, he draws a comparison between the developing countries and the prosperous countries in the aspect of the uneven distribution of responsibility for the refugee crisis. Additionally, he uses a contrast between the collective efforts to resolve the crisis and the change of the global political environment. One available solution to the problems, Ban suggests, includes making efforts to increase partnership with collective responsibility.

At the beginning of his editorial, Ban depends upon making a connection between the argument and personal first-hand experience to create an ethical appeal: “In 1951 a young boy and his family fled their burning village during a brutal war that brought immeasurable death and destruction to their country. …This child uprooted by conflict was me.” The use of the personal experience related to the argument helps capture the readers’ interest and enhances the author’s ethos. Mentioning the social status can bring a dogmatism fallacy.

Moreover, this particular technique provides the background information of the following paragraph: “I met so many children around the world, who reminded of my own wrenching experience of displacement. Seeing myself in them….” He continues to appeal to ethos with his social status “as the eighth secretary-general of the United Nations” to enhance his public credibility.

Besides, Ban uses highly reliable sources that strengthen his credibility and appeal to ethos, as well as build his argument. These sources include, “the United Nations refugee agency,” and “the Missing Migrants Project.” Citing the sources strengthens Ban’s credibility by showing that he has provided facts and statistics to introduce and support his claim. He also uses personal examples from his time in office to help the thesis statement, which shows that he has made efforts to resolve the refugee crisis.

These statistics introduce and support his claim. More importantly, the details and numbers build an appeal to logos and impress upon the reader that this is a problem worth discussing while avoiding using a slippery slope fallacy. He continues to point out facts about the inequitable sharing of responsibility for the crisis: “Countries in the developing world – Turkey, Pakistan, Uganda, Lebanon, Iran, Bangladesh, and Sudan – are host to among the largest numbers of refugees, while the prosperous nations of the global north have failed (with the exception of Germany) to share the burden fairly. This needs to change.” These facts are a few of many that provide a logical reason for his claim that we have to consider the refugee crisis first as “a crisis of solidarity.” Moreover, they also support the idea that “equitable sharing of responsibility is critical to ameliorating this crisis of global solidarity.

Along with strong logos appeals, Ban effectively makes appeals to pathos in the beginning throughout the essay. His introduction is used of emotionally-charged words and phrases that create a sympathetic image. His goal is to make the reader feel sympathy for refugees by describing his first-hand experience. Adding to this idea, Ban notes that he has a “wrenching” experience of his “burning village” during “a brutal war” that brought “immeasurable death and destruction” and the postwar effect continue to “haunt him in the days and years to come.”

The image he evokes of the frustration and desperation of being a refugee, as well as the high emotions a refugee feels at that time effectively introduce the argument and its seriousness. Another feeling Ban strengthens with his word choice is the concept of solidarity and fairness: “collective conscience,” “a crisis of solidarity,” “global solidarity,” “sharing the burden fairly,” and “equitable sharing of responsibility.” These words help establish the collective crisis and the unfairness that exist because of a dramatic change of “the global political environment” in recent years. Moreover, they are an appeal to pathos or the readers’ feelings of regret.

Overall, Ban’s essay is well-organized to address his claim to the readers. In particular, his credibility is built by setting up a correlation between the argument and first-hand experience. Also, he uses many words which evoke negative emotions to make the reader feel sympathy for refugees. Citing the reliable sources are beneficial in helping appeal to both ethos and logos. At the same level of effectiveness, his personal and public facts logically support his claim that we have to consider the refugee crisis as a collective crisis and increase partnership efforts. Therefore, the functions of the techniques he uses in the article effectively influence on being a convincing essay.

The Global Responsibility for the Refugee Crisis. (2019, Jul 12). Retrieved from https://papersowl.com/examples/the-global-responsibility-for-the-refugee-crisis/