Intersectionality is the Different Ways Structures of Power 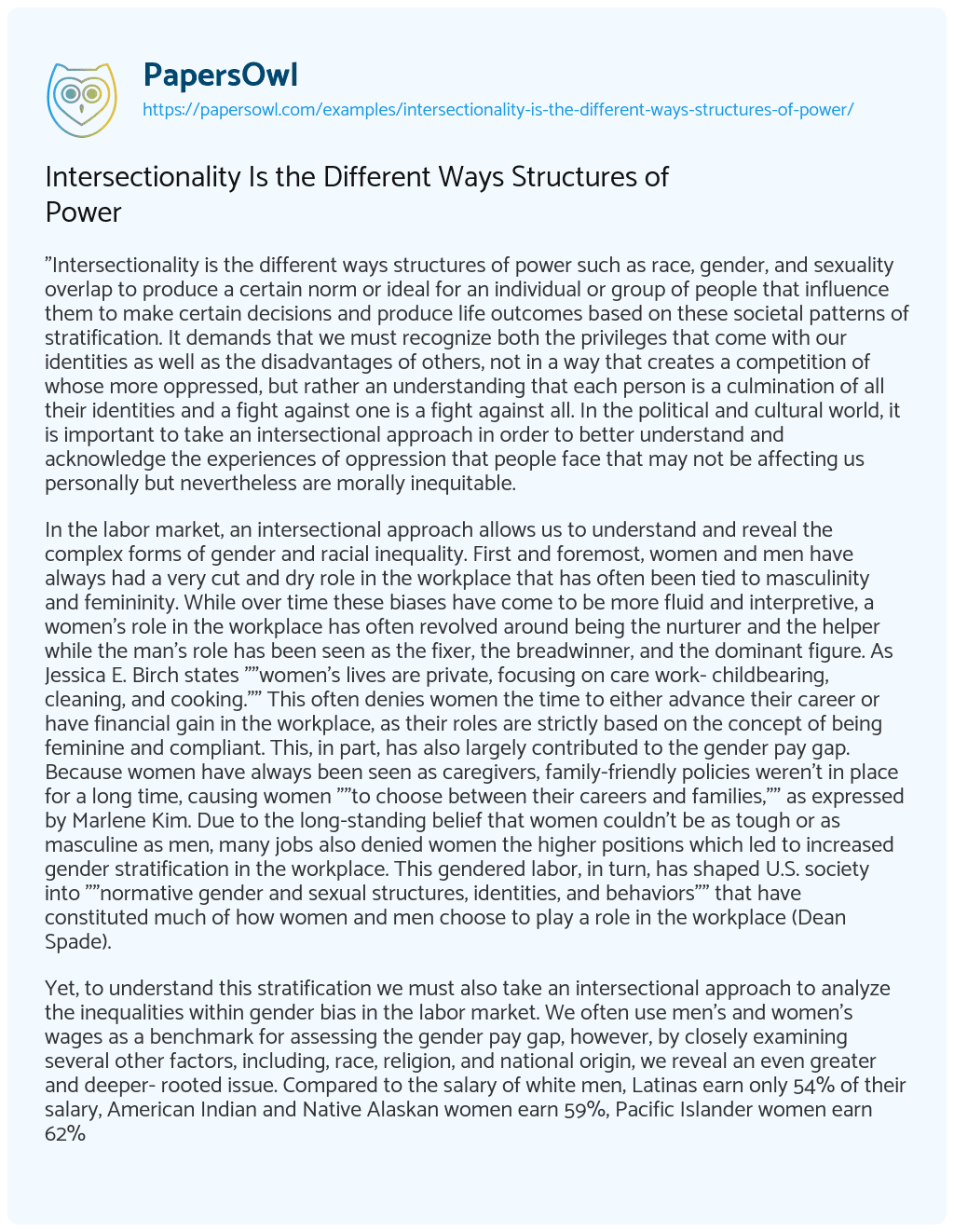 “Intersectionality is the different ways structures of power such as race, gender, and sexuality overlap to produce a certain norm or ideal for an individual or group of people that influence them to make certain decisions and produce life outcomes based on these societal patterns of stratification. It demands that we must recognize both the privileges that come with our identities as well as the disadvantages of others, not in a way that creates a competition of whose more oppressed, but rather an understanding that each person is a culmination of all their identities and a fight against one is a fight against all. In the political and cultural world, it is important to take an intersectional approach in order to better understand and acknowledge the experiences of oppression that people face that may not be affecting us personally but nevertheless are morally inequitable.

In the labor market, an intersectional approach allows us to understand and reveal the complex forms of gender and racial inequality. First and foremost, women and men have always had a very cut and dry role in the workplace that has often been tied to masculinity and femininity. While over time these biases have come to be more fluid and interpretive, a women’s role in the workplace has often revolved around being the nurturer and the helper while the man’s role has been seen as the fixer, the breadwinner, and the dominant figure. As Jessica E. Birch states “”women’s lives are private, focusing on care work- childbearing, cleaning, and cooking.”” This often denies women the time to either advance their career or have financial gain in the workplace, as their roles are strictly based on the concept of being feminine and compliant. This, in part, has also largely contributed to the gender pay gap. Because women have always been seen as caregivers, family-friendly policies weren’t in place for a long time, causing women “”to choose between their careers and families,”” as expressed by Marlene Kim. Due to the long-standing belief that women couldn’t be as tough or as masculine as men, many jobs also denied women the higher positions which led to increased gender stratification in the workplace. This gendered labor, in turn, has shaped U.S. society into “”normative gender and sexual structures, identities, and behaviors”” that have constituted much of how women and men choose to play a role in the workplace (Dean Spade).

Yet, to understand this stratification we must also take an intersectional approach to analyze the inequalities within gender bias in the labor market. We often use men’s and women’s wages as a benchmark for assessing the gender pay gap, however, by closely examining several other factors, including, race, religion, and national origin, we reveal an even greater and deeper- rooted issue. Compared to the salary of white men, Latinas earn only 54% of their salary, American Indian and Native Alaskan women earn 59%, Pacific Islander women earn 62%, and African American earn 63% (Saraswati et al). These examples show how the social constructions of race and gender, created by society, systematically oppress certain groups within the labor market and lead to unequal distribution of power and resources. Often times, these statistics can discourage marginalized groups of people from working towards their goal due to the belief that they aren’t good enough or adequate for the job.

An intersectional approach to understanding this issue allows us to further recognize that the labor market creates and reinforces structural barriers in which “limit or influence options afforded to women, queer people, people of color, and immigrants” (Saraswati et al, p. 210). For example, “of LBTQI+ lawyers, only 2% are female and 1% of male equity partners identify as queer” (Saraswati et al, p. 211). This goes to show how the LGBTQI+ community is extremely underrepresented and stratified in not only legislative positions, but numerous occupations. There also no laws that protect the queer community from being denied employment based on their sexual orientation or gender identity. Similarly, when women enter motherhood, they experience the mother pay penalty where they are paid less. On the flip side, men receive wage increases when they have kids, known as the fatherhood bonus. As a response, activists have begun to give women and the LGBTQ+ community “”equal access and equal opportunities in the paid workforce.”” Some of these approaches include increasing access to higher paid professions for women, prohibiting pay secrecy, unionizing professions, and increasing pay for women and LBTQ+ members. Although these actions have not completely gotten rid of the unequal pay distribution, they have done much to make the issue more nationally known and legislated for.

Looking at the labor market from an intersectional approach also allows us to look past any norms that society has imposed on certain career fields. Brenda Jo Brueggemann explains how public education has always been about normalizing the way we think and view the world in a way in which we all function and learn the same way. Her experience as a disabled woman in academia has allowed her to see this culture we have around normalizing our bodies and making such a big deal about fitting the “standard expectations.” If instead, students are taught about the notions of intersectionality and the detrimental impacts on marginalized groups, the lens through which we see people who do not belong to our identified race, gender, sexuality, or class might be more positive. It will allow for a difference in skin color or expression of gender to be seen as not something that is foreign or atypical, but rather another layer of identity and belonging. Comparably, people who are often oppressed may also begin to look at the labor market as a means of fighting for what they are passionate about and working towards holding top positions rather than accepting the society-imposed norms.

While recognizing that each person faces their own forms of privileges and oppressions is the first step to looking at the labor market with an intersectional approach, we must also respond and act upon these issues. Organizers and activists informed by intersectionality tend to reject movements based on single-issue politics and single identities. Rather, they focus on creating movements that are fluid, optimistic, and listen and voice the concerns of underrepresented or hidden identities not mentioned in social justice reform and politics. Additionally, it allows people of all backgrounds to join a coalition based on creating an accepting society. This has paved the way to more comprehensive movements focused on breaking everything from stereotypes to gender pay gaps to exclusionary laws.

Intersectionality, in its truest form, aims to explain the stratified social system that is created by our society. It explains that women of color experience a different form of racism from a man of color and a different form of sexism from a white woman. It shows us that a black transgender woman can face discrimination in the workplace but so can a Latino queer man. Most importantly, it informs us about the rather hierarchical nature of power that is weaved into almost every aspect of our lives. With each separate movement, we aim to accept intersectionality as a tool to understand the challenges faced by people who belong to multi-marginalized communities. Taking an intersectional approach to view the labor market lets us see how groups of certain identities are denied jobs, high status positions, equal pay, and an opportunity to work without the fear of being discriminated against. It’s important to note that we must look at these issues through the eyes of all oppressed groups to tell the full story. We must begin to inform others of not only the gender pay gap, but the Latina pay gap. We must not only work for ending unemployment with expecting mothers, but for the disabled as well. It won’t take overnight to change the way we attack these problems, but through incorporating an intersectional approach, we can work towards creating a society dedicated to understanding the issues of other in a way that doesn’t undermine the multiple oppressions people may be facing.”

Intersectionality Is the Different Ways Structures of Power. (2021, May 24). Retrieved from https://papersowl.com/examples/intersectionality-is-the-different-ways-structures-of-power/

Racism Can be Defined in Numerous Ways