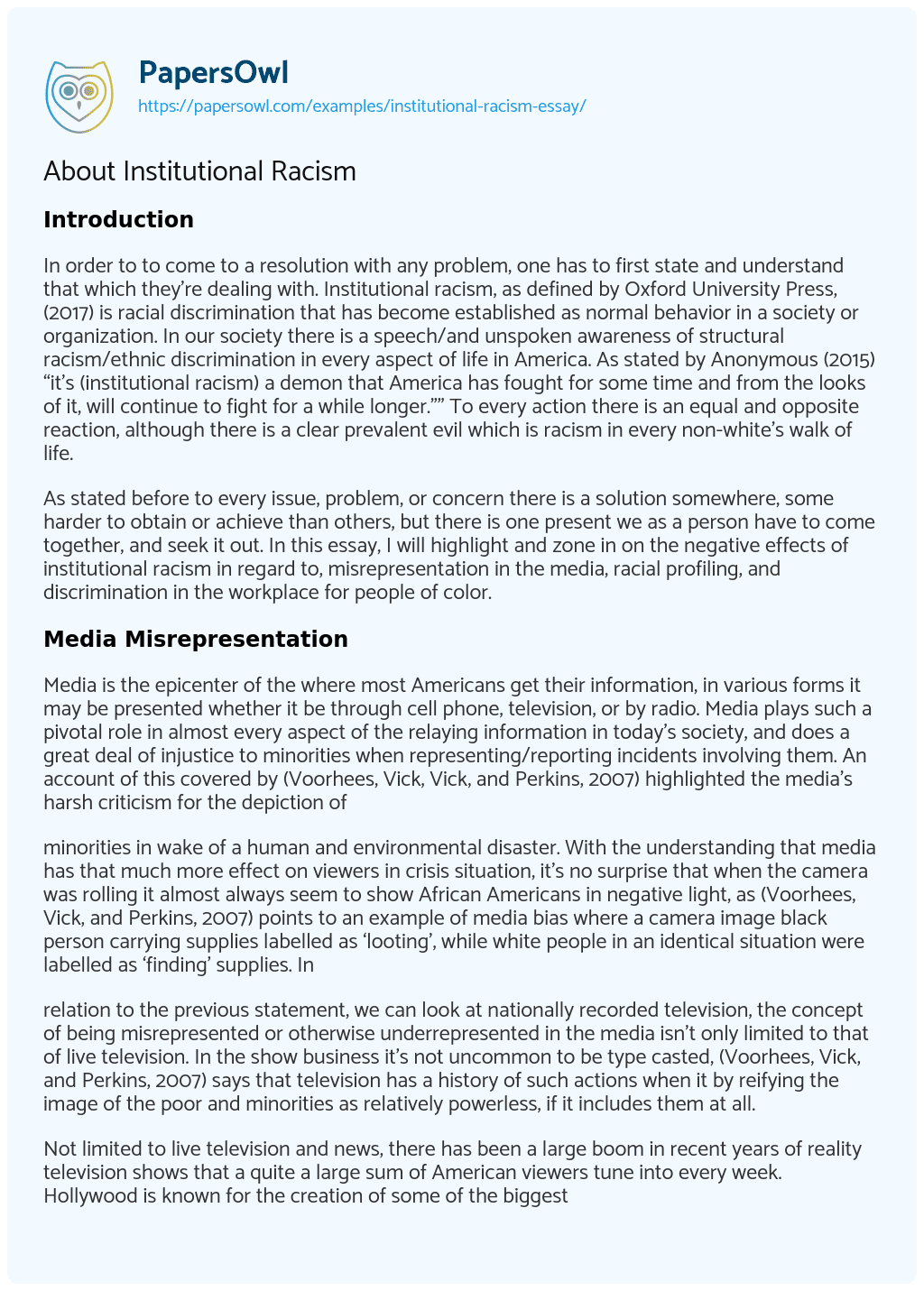 In order to to come to a resolution with any problem, one has to first state and understand that which they’re dealing with. Institutional racism, as defined by Oxford University Press, (2017) is racial discrimination that has become established as normal behavior in a society or organization. In our society there is a speech/and unspoken awareness of structural racism/ethnic discrimination in every aspect of life in America. As stated by Anonymous (2015) “it’s (institutional racism) a demon that America has fought for some time and from the looks of it, will continue to fight for a while longer.”” To every action there is an equal and opposite reaction, although there is a clear prevalent evil which is racism in every non-white’s walk of life.

As stated before to every issue, problem, or concern there is a solution somewhere, some harder to obtain or achieve than others, but there is one present we as a person have to come together, and seek it out. In this essay, I will highlight and zone in on the negative effects of institutional racism in regard to, misrepresentation in the media, racial profiling, and discrimination in the workplace for people of color.

Media is the epicenter of the where most Americans get their information, in various forms it may be presented whether it be through cell phone, television, or by radio. Media plays such a pivotal role in almost every aspect of the relaying information in today’s society, and does a great deal of injustice to minorities when representing/reporting incidents involving them. An account of this covered by (Voorhees, Vick, Vick, and Perkins, 2007) highlighted the media’s harsh criticism for the depiction of

minorities in wake of a human and environmental disaster. With the understanding that media has that much more effect on viewers in crisis situation, it’s no surprise that when the camera was rolling it almost always seem to show African Americans in negative light, as (Voorhees, Vick, and Perkins, 2007) points to an example of media bias where a camera image black person carrying supplies labelled as ‘looting’, while white people in an identical situation were labelled as ‘finding’ supplies. In

relation to the previous statement, we can look at nationally recorded television, the concept of being misrepresented or otherwise underrepresented in the media isn’t only limited to that of live television. In the show business it’s not uncommon to be type casted, (Voorhees, Vick, and Perkins, 2007) says that television has a history of such actions when it by reifying the image of the poor and minorities as relatively powerless, if it includes them at all.

Not limited to live television and news, there has been a large boom in recent years of reality television shows that a quite a large sum of American viewers tune into every week. Hollywood is known for the creation of some of the biggest celebs known on the tube, but one trait, as, as this article points out, that falls out of normal glamorous spotlight is stereotyping and misrepresenting racial minorities (Shackelford, 2015). The Hollywood role casting has normally only called for people of color only when the movie calls specifically for one or more of them to be portrayed. Typically actors of color are typecasted, never really chosen for lead roles, and largely underrepresented in films and televisions programs (Shackelford, 2015). As stated before, there’s been a large boom in reality television shows on the air, designed to depict and subject people of color and different ethnic backgrounds in a negative stereotypical way, participate in distasteful discriminatory practices, ultimately stracize minorities. An example of this came with the dismissing of section 81 discrimination claim of the The Bachelor, where a court in the case, Claybrooks v. American Broadcasting Companies, who were given the freedom to make casting choices based on the prevention of interracial dating (Shackelford, 2015). The case and casting decisions dismed under the protection granted by the First amendment.

The harm of racial discrimination exist in many of the various non-white races walks of life and isn’t a respecter of gender or age. Dealing with underprivileged youth, in specific, in the youth justice system and its injustices relating to profiling are attributes that show the overrepresentation of non white youth in the justice system. Usually being from low income backgrounds, their more than likely to be targets for the stop and frisk policy. This youth are looked down upon from the moment they enter the system, whether they meet the qualifications (VanVleet and Holley, 2006).

Another example of racial profiling came into the spotlight after the terrible events of 9/11. The things that happened that day created some of the most uneasy environments for Americans but also for citizens of muslims/middle eastern ethnicity or descent, inhabitants who has called America their home before and after the events that occurred. These acts of war carried out by a terrorists group out of the middle east, Al-Qaeda, led to a sharp increased stereotypical fear of anyone who looked to be or was of Arab or Middle Eastern appearance or descent. Due to the unreceived recognition of the Middle Eastern race as a minority group in America, a lot of the instances and cases of discrimination go unrecorded (Awad, 2010). Sad to think that a country created on the basis of being free to be yourself unapologetically has shaped out to be the lesser of the evils in a world of discrimination in every corner of the globe.

There are enough difficulties that come with living and making it as an everyday citizen in the United states. One such issue that is present when it comes to being of a different race and ethnicity is finding, obtaining, and keeping a job in many fields of America’s workforce. For most places of business the hiring process is a rather rigorous process, this does a deal of disadvantaging people of color. Once on the job, some undergo various discriminatory things in the workplace. (Otuyelu, Graham, and Kennedy, 2016) suggests that forms of micro-aggression are commonplace in work environments, more specifically in this article the social work field. The impact of the various forms of micro-aggression so common in the workplace, from the subtle insults directed towards non whites to the first hand accounts of microinsults, microinvalidations, microassaults, and just outright discrimination does a great deal of damage to a work environment. As stated by (Otuyelu, Graham, and Kennedy, 2016), this microaggressive racially discriminatory practice could derail provision and staff development.

Ways to fix it

Racism was caused and maintained by other white people who believed in the inferiority of people of color. There it’s said, which in a lot of ways is admitting there’s a problem, and it’s the admitting there is one that begins the solving of it. Rush (2011) suggests that we could begin to building healthy relationships is to start talking about the issue and avoid falling into the tap of ‘racial silencing’. We as a people find discomfort or are meet with hostility when the discussions of race are harped upon, but according to (Rush, 2011) it’s just easier for whites, and some non-whites to drop from the conversation, and while colorblindness and silencing are concepts that serve to alleviate the discomfort when ever racism is made topic of discussion, it’s fair to believe that the healthy hostility that once was aimed problems of racism and inequality is growing into into and unhealthy resentment toward equality mind persons. When there is a problem, situation, or issue that arises or has been around for some time, believe that there is a solution. No solution is perfect and will be fitting for everyone, in most cases they may call for one side to sacrifice something in order to reach peace. (Rush, 2011) says that in order to defeat the demon that has plagued this great nation since we its origin, is to think with an open mind and judge based on the content of character.

Another way to fix a seemingly never ending problem with Racism that America can’t seem to shake would be the children. (Husband Jr., 2012) agrees with the fact that it begins with the children sentiment, suggests that an anti-racist approach to education that schools exist as microcosms of the larger US society, where racism exists and permeates every institution therein. (Husband Jr., 2012) believes that and teacher who is wanting to implement such an environment, previously stated, they might begin by spending a significant amount of time examining the information and perspectives presented in school policies, texts, and curriculum for racial injustice. The issue that would arise would this is as (Husband Jr., 2012) stated is “overly political”, as stated before, there are pros and cons to every solution but to reach peace one must be willing to take the risk and deal with the demons that are present in our structurally unequal society to make it safe and sustainable for future generations.

As stated before racism is prevalent, commonplace even, in our society. It may have taken on a different form and changed titles slightly to evolve with the time, but it’s the same demon Americans of color, different backgrounds, and ethnicities are faced with everyday they step foot out their front door. I want you the reader, to read this essay with an open mind, and a need to see through the eyes of another and see a present clear idea of the negative effects of institutional racism in regard to, misrepresentation in the media, racial profiling, and discrimination in the workplace for people of color. With With the evidence gathered, and compiled to case that you’ll want to take up your stance in justice and stand in arms with brothers and sisters alike, who wish to see the strongholds of generational racism in this great country that allows you to be your regardless of race, religion, color, sexual orientation, and or creed.”