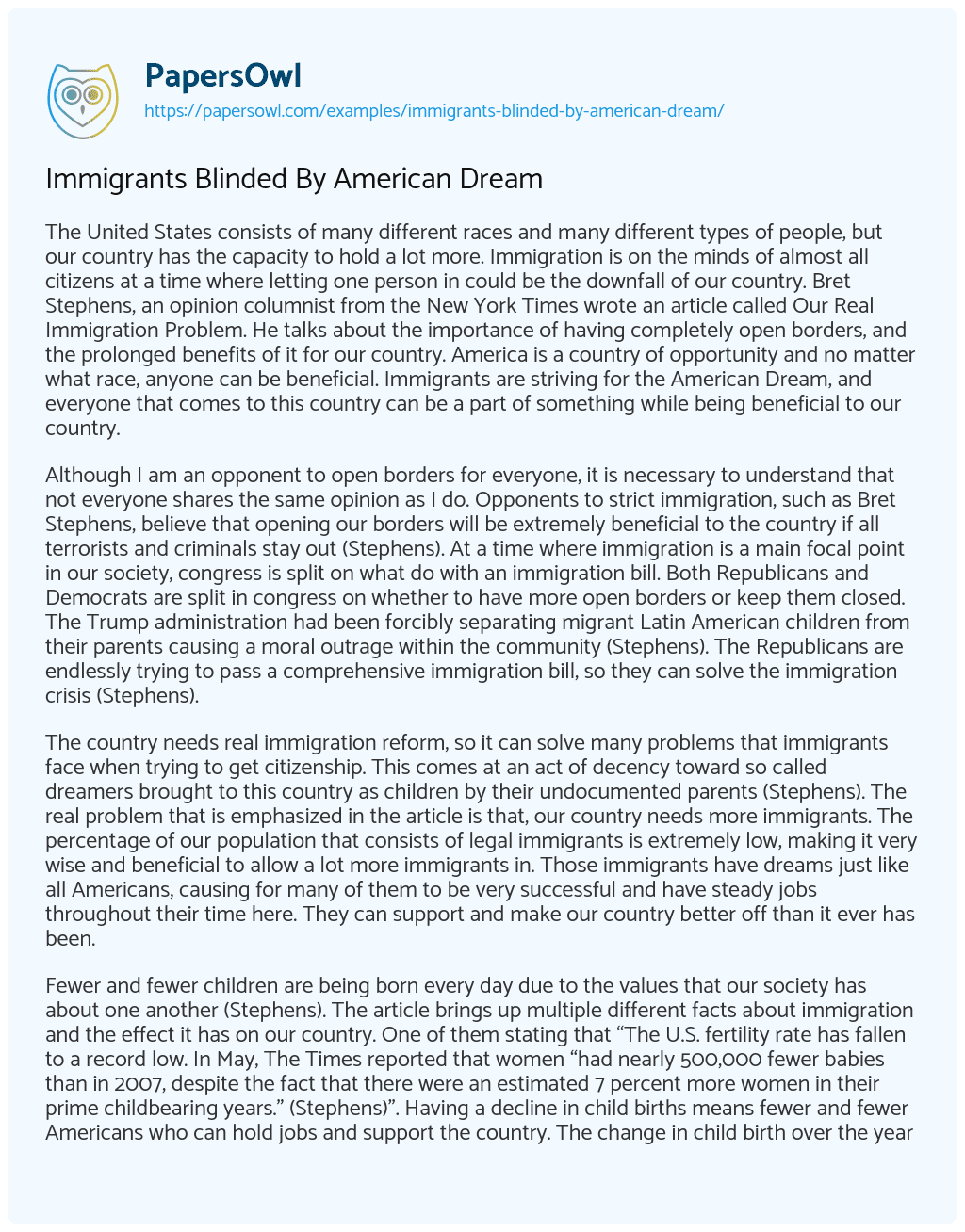 The United States consists of many different races and many different types of people, but our country has the capacity to hold a lot more. Immigration is on the minds of almost all citizens at a time where letting one person in could be the downfall of our country. Bret Stephens, an opinion columnist from the New York Times wrote an article called Our Real Immigration Problem. He talks about the importance of having completely open borders, and the prolonged benefits of it for our country. America is a country of opportunity and no matter what race, anyone can be beneficial. Immigrants are striving for the American Dream, and everyone that comes to this country can be a part of something while being beneficial to our country.

Although I am an opponent to open borders for everyone, it is necessary to understand that not everyone shares the same opinion as I do. Opponents to strict immigration, such as Bret Stephens, believe that opening our borders will be extremely beneficial to the country if all terrorists and criminals stay out (Stephens). At a time where immigration is a main focal point in our society, congress is split on what do with an immigration bill. Both Republicans and Democrats are split in congress on whether to have more open borders or keep them closed. The Trump administration had been forcibly separating migrant Latin American children from their parents causing a moral outrage within the community (Stephens). The Republicans are endlessly trying to pass a comprehensive immigration bill, so they can solve the immigration crisis (Stephens).

The country needs real immigration reform, so it can solve many problems that immigrants face when trying to get citizenship. This comes at an act of decency toward so called dreamers brought to this country as children by their undocumented parents (Stephens). The real problem that is emphasized in the article is that, our country needs more immigrants. The percentage of our population that consists of legal immigrants is extremely low, making it very wise and beneficial to allow a lot more immigrants in. Those immigrants have dreams just like all Americans, causing for many of them to be very successful and have steady jobs throughout their time here. They can support and make our country better off than it ever has been.

Fewer and fewer children are being born every day due to the values that our society has about one another (Stephens). The article brings up multiple different facts about immigration and the effect it has on our country. One of them stating that “The U.S. fertility rate has fallen to a record low. In May, The Times reported that women “had nearly 500,000 fewer babies than in 2007, despite the fact that there were an estimated 7 percent more women in their prime childbearing years.” (Stephens)”. Having a decline in child births means fewer and fewer Americans who can hold jobs and support the country. The change in child birth over the years will end up causing issues in the workforce, making it necessary to have immigrants come in and fill many of those positions.

Many immigrants make just as good of citizens because of their drive for success. Not only are fewer Americans being born, but Americans in general are getting older. As our country progresses, and our health services get better every single day, it becomes very easy to live over the age of sixty-five. Once someone becomes over that age, they don’t contribute to society as much because of retirement causing a need for others to fill in. Immigrants are some of the best employees who work just as hard (Stephens). Americans are getting older, there were more than forty million Americans over the age of sixty-five in 2010 and that number is continuously rising (Stephens). “By 2050 the number will be closer to 90 million, or an estimated 22.1 percent of the population” (Stephens).

This will be a rising concern in the near future and one way to combat that is by letting immigrants in who believe in the same values that we value on a daily basis. Mostly everyone that is let inside of our borders has the American dream inspired into them which translates over into our labor industries. Our country is falling short in participation for many different industries, as well as having much of small town/rural community emptying out. There is immense amount of job opportunities available from farming to high skilled jobs which are able to fill the needs of many immigrants that want to come here. The Federal Reserve has stated multiple labor shortages in many different industries, one of them being the farm industry, where nearly 20% of its participants were lost from 2002 – 2014.

This accounts for a three-billion-dollar loss in revenue a year, which could be solved by allowing immigrants of all types to take that role. Much of rural America is emptying out, which is seen in many rural counties where more people are dying rather than being born. This is a major reason why the farming industry is losing ample amounts of participants each year. The drive and determination embodied in a lot of immigrants can solve the problem of our small towns emptying out. The American Values of drive and determination are evident in the lives of outsiders and they would make an incredible fit to much of America that is frowned upon, rural America.

There is a major shortage of people in rural America, and our population of immigrants is low compared to other countries. Other countries around the world don’t have the major conflictions that we do about immigration. Because of our intense immigration laws, it is hard to have a high population of immigrants and that is evident. “The immigrant share (including the undocumented) of the U.S. population is not especially large: About 13.5 percent, high by recent history but below its late 19th century peak of 14.8 percent. In Israel, the share is 22.6 percent; in Australia, 27.7 percent”. Compared to other countries, most of our population consists of true Americans born here. Millions of people have a very tough time making it here from other countries, even though they have the same values and same intentions as every single American.

Of all the people inside our country, the citizens that convey the values of true freedom and democracy are the immigrants who weren’t born here to begin with. Those immigrants legal or otherwise are more entrepreneurial, more church-going, less likely to have kids out of wedlock, and far less likely to commit a crime (Stephens). These are some characteristics that millions of immigrants convey on a daily basis. They care about waking up every day with more than they had before. They have the drive and determination to be successful in any type of job or position and that is evident by each person going through the process of citizenship. It is easy to be born here and take everything for granted, but it is very hard for someone to lack those skills when they grew up somewhere else striving to do so much more.

America is a country of opportunity and there are millions of more people that look to come here and achieve that opportunity whether it means working in a grocery store or working with a high-ranking firm in a major city. As Bret Stephens goes through the article focusing on the importance of Immigration and how beneficial it is to our country, it is safe to say that he is targeting skeptical conservatives. In his underlying beliefs of immigrants achieving the American dream and that all immigrants can be beneficial, he is trying to prove to skeptical conservatives to switch their values on this sensitive topic. He wants these people to understand the values of immigrants and what they can be to this country, so they can show a greater appreciation for liberal values. Bret Stephens has the ability to convince millions of people about the opportunities available for aspiring citizens.

We are living in a country with immense amounts of opportunity and there is plenty of room for a lot more people. Whether it be based on American birth rates, the number of older citizens already, labor shortages, or the lowering number of citizens in small towns, it is necessary to have immigrants who can fulfill the duties of many Americans in a more effective way. Even though I don’t believe in having open borders for all, it is completely in my best interests and everyone’s to understand the importance millions of immigrants can have on our country because of their beliefs and actions. The article written by Bret Stephens shows the underlying characteristics that most immigrants possess. These people are firm believers in our democracy and freedom that we convey daily, as well as the determination and dedication.

They are exemplary examples of what a true American should be and there is plenty of room in our country for them. The immigration laws set in place are outrageous to all the law-abiding people aspiring to be citizens and it is necessary to take them away because of the strong American belief’s immigrants have engrained inside of them. If the select few terrorists and criminals were abolished from this world, open borders would be the most important aspect to our success as a country (Stephens). They could make a change for the better and fulfil most of America’s values better than many natural born citizens. Each immigrant is capable of achieving the American dream and they are all extremely useful to the United States.

The American Dream for Mexican Immigrants

Are Immigrants Good for the Americans?

Unauthorized Immigrants in the United States