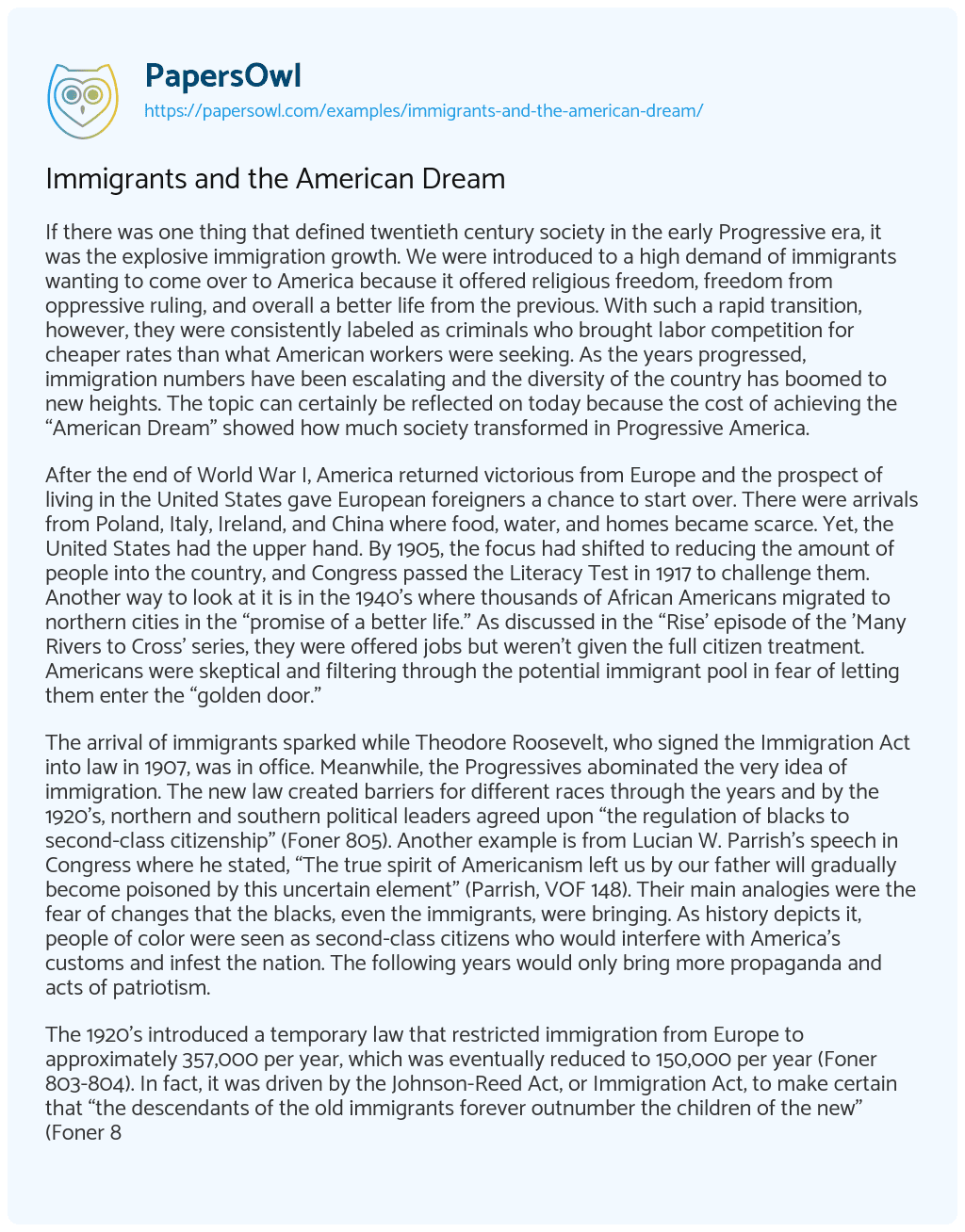 If there was one thing that defined twentieth century society in the early Progressive era, it was the explosive immigration growth. We were introduced to a high demand of immigrants wanting to come over to America because it offered religious freedom, freedom from oppressive ruling, and overall a better life from the previous. With such a rapid transition, however, they were consistently labeled as criminals who brought labor competition for cheaper rates than what American workers were seeking. As the years progressed, immigration numbers have been escalating and the diversity of the country has boomed to new heights. The topic can certainly be reflected on today because the cost of achieving the “American Dream” showed how much society transformed in Progressive America.

After the end of World War I, America returned victorious from Europe and the prospect of living in the United States gave European foreigners a chance to start over. There were arrivals from Poland, Italy, Ireland, and China where food, water, and homes became scarce. Yet, the United States had the upper hand. By 1905, the focus had shifted to reducing the amount of people into the country, and Congress passed the Literacy Test in 1917 to challenge them. Another way to look at it is in the 1940’s where thousands of African Americans migrated to northern cities in the “promise of a better life.” As discussed in the “Rise’ episode of the ‘Many Rivers to Cross’ series, they were offered jobs but weren’t given the full citizen treatment. Americans were skeptical and filtering through the potential immigrant pool in fear of letting them enter the “golden door.”

The arrival of immigrants sparked while Theodore Roosevelt, who signed the Immigration Act into law in 1907, was in office. Meanwhile, the Progressives abominated the very idea of immigration. The new law created barriers for different races through the years and by the 1920’s, northern and southern political leaders agreed upon “the regulation of blacks to second-class citizenship” (Foner 805). Another example is from Lucian W. Parrish’s speech in Congress where he stated, “The true spirit of Americanism left us by our father will gradually become poisoned by this uncertain element” (Parrish, VOF 148). Their main analogies were the fear of changes that the blacks, even the immigrants, were bringing. As history depicts it, people of color were seen as second-class citizens who would interfere with America’s customs and infest the nation. The following years would only bring more propaganda and acts of patriotism.

The 1920’s introduced a temporary law that restricted immigration from Europe to approximately 357,000 per year, which was eventually reduced to 150,000 per year (Foner 803-804). In fact, it was driven by the Johnson-Reed Act, or Immigration Act, to make certain that “the descendants of the old immigrants forever outnumber the children of the new” (Foner 804). Since then, the law created the illegal alien category and closed the entry to those unqualified for naturalized citizenship. Today, the borders between the United States and Mexico are tightly controlled and oftentimes closed off. Border Patrol has been, and is still, a strong enforcement mechanism used to arrest and deport those who dared to enter illegally. The reason is because quotas and limits began to further restrict arrivals, making it a difficult process to migrate into the United States no matter what era or century.

In theory, we were always taught how history repeats itself. The early 1900’s showcased the pros and cons of immigration in the United States. While it had strengthened our productivity numerically, the immigration epidemic also supplied America with servants and laborers. One must reconsider how our society would run if it weren’t for them. The contributions of the new immigrants weren’t threatening at all. In fact, they learned the principles of real democracy and changed the ethnic diversity of the immigrants in America into a more multicultural society with varied language, traditions, and practices. The phrase by President Coolidge, “America must be kept American,” (Foner 805) is challenged by the astonishing cultural contributions of the new immigrants of modern America.

Immigrants and the American Dream. (2021, Jan 15). Retrieved from https://papersowl.com/examples/immigrants-and-the-american-dream/

The American Dream for Mexican Immigrants

Unauthorized Immigrants in the United States