How the Judges should or Shouldn’t Consider the RGE Evidence 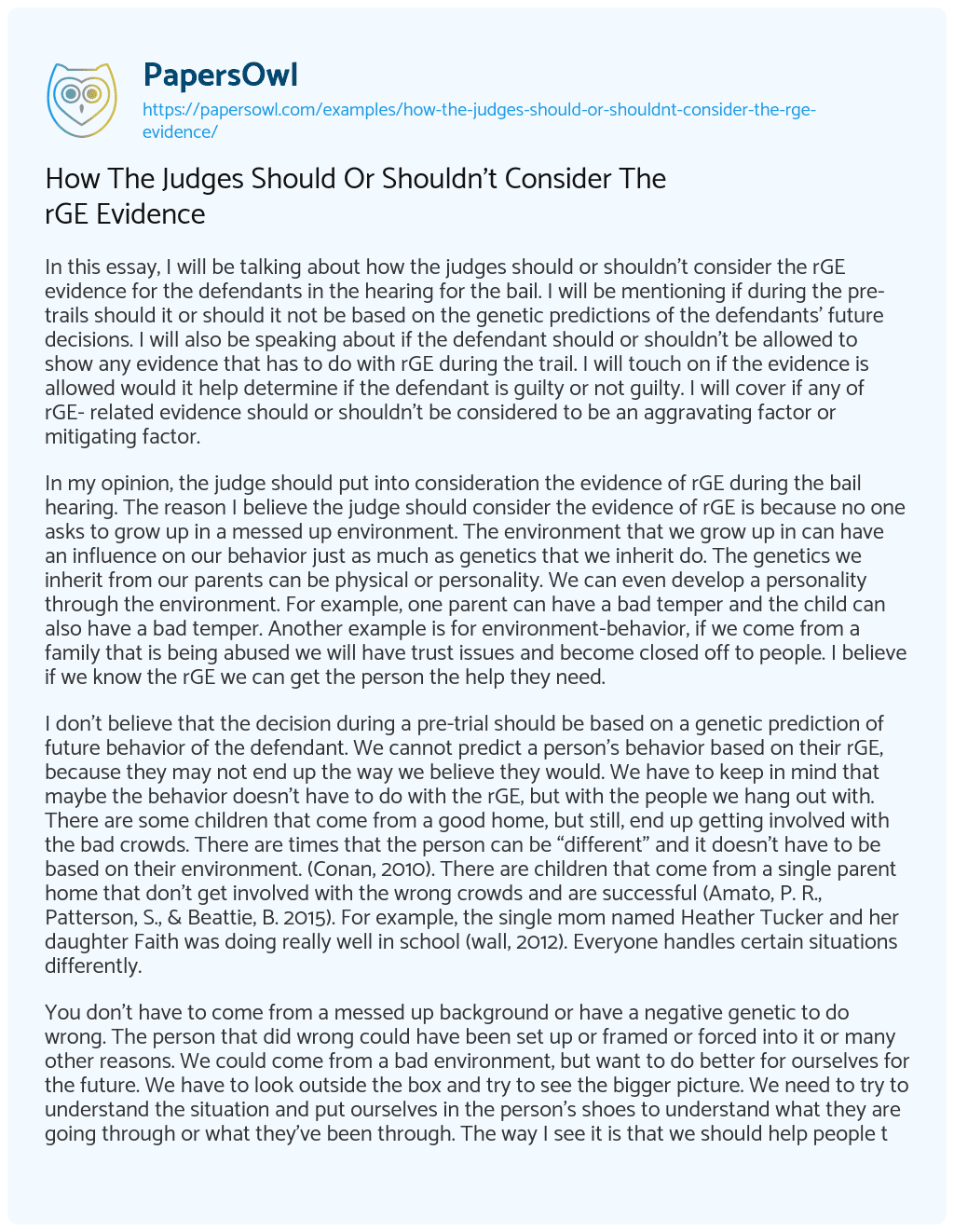 In my opinion, the judge should put into consideration the evidence of rGE during the bail hearing. The reason I believe the judge should consider the evidence of rGE is because no one asks to grow up in a messed up environment. The environment that we grow up in can have an influence on our behavior just as much as genetics that we inherit do. The genetics we inherit from our parents can be physical or personality. We can even develop a personality through the environment. For example, one parent can have a bad temper and the child can also have a bad temper. Another example is for environment-behavior, if we come from a family that is being abused we will have trust issues and become closed off to people. I believe if we know the rGE we can get the person the help they need.

I don’t believe that the decision during a pre-trial should be based on a genetic prediction of future behavior of the defendant. We cannot predict a person’s behavior based on their rGE, because they may not end up the way we believe they would. We have to keep in mind that maybe the behavior doesn’t have to do with the rGE, but with the people we hang out with. There are some children that come from a good home, but still, end up getting involved with the bad crowds. There are times that the person can be “different” and it doesn’t have to be based on their environment. (Conan, 2010). There are children that come from a single parent home that don’t get involved with the wrong crowds and are successful (Amato, P. R., Patterson, S., & Beattie, B. 2015). For example, the single mom named Heather Tucker and her daughter Faith was doing really well in school (wall, 2012). Everyone handles certain situations differently.

You don’t have to come from a messed up background or have a negative genetic to do wrong. The person that did wrong could have been set up or framed or forced into it or many other reasons. We could come from a bad environment, but want to do better for ourselves for the future. We have to look outside the box and try to see the bigger picture. We need to try to understand the situation and put ourselves in the person’s shoes to understand what they are going through or what they’ve been through. The way I see it is that we should help people that are on the wrong path by advising or showing them the right from wrong. There is another element other than environmental or genetic inherit that can influence bad behavior.

I also believe we should stop judging people because we could be the reasons why they are doing the wrong thing. People that are always being judged by others could just give up on doing the right thing and just decided on going along with what others see them as. People should also stop bullying because that can influence a person’s behavior. We shouldn’t tease or insult a person because that can also have a lot of doing with the behavior. Others don’t think to look at the parents and how they act when the doors of the house are closed toward the public. People can act one way in the eyes of the public, but don’t really act that way behind closed doors. For example, parents could act as they care about their children in public eyes, but once home they could care less about their children and what they do (Conan, 2010).

Therefore, with the rGE-related evidence, we can consider the right type of punishment, sentencing, and help. If they show the evidence of rGE we can determine if they really have a mental illness or not. We all know when in the trail all the defendants claim that they have some type of mental illness and that is the reason for what they did. We can determine with this evidence how much time they have to serve with the type of crime they have committed if they are guilty. And if they are found guilty and have an illness, while they are getting their treatment they could do half the sentencing then. Then after they get the help they need, they can finish their sentence in prison. To me, we should put a double sentence to the people who fake a mental illness. I believe no one should joke about mental illness because that is something truly serious. With this evidence, we can know the defendant’s rGE and get them the proper help they need if they are innocent.

I believe with the defendant’s genetic predisposition could be determined aggravating factor or mitigating factor, but if it is diagnosed correctly. It depends on the type of crime and how the crime was carried out. An aggravating factor can be any facts or occurrence will increase as either severity or culpability. If the defendant could have shown the behavior of repeated criminal activity which would mean a harsher punishment or longer time in jail or prison. The second behavior is targeting helplessness of victim which means the age, the violence of a crime against a child, targeting the elderly, and targeting the physical or mental disability meaning the sick or the injured or the incapacitated. The third is leadership role which is if they are the ones that had ordered the crime to occur. The fourth is hate crimes which include harm to happen to a certain race, religious group, or nationality origins, and sexual orientation and gender identity (Hamilton, M. A. 2019). I believe if you have an anger problem that cannot be controlled then it can also be considered aggravating factor as well. If they had done a crime and show signs of an aggravating factor then yes it should be treated as such.

When it comes to a mitigating factor is considered as any facts or occurrence that minimize the severity or culpability of a criminal act. The mitigating factor contains an ability for a criminal to change, mental illness. The second includes addiction to illegal drugs and alcohol that can influence bad behavior, past good deeds. The third is don’t have multiple criminal records. The fourth is the crimes done are always minor offenses. Fifth is the victim is to be at blame. The sixth is what happens to the defendant the reason for why they did the crime. The seventh is their emotional state. The eighth is that they regret what they did (Hamilton, M. A. 2019).

As we conclude this essay, people’s behavior can be because of rGE. The behavior can be influenced by the environment. The behavior of a person doesn’t have to be based only on environments or rGE, but with how people treat us. People’s behavior could be influenced by other judging or teasing or bullying them. That rGE-related evidence should be allowed during the trials because we can determine if the defendant truly as a mental illness or is faking. We can also determine if they should be a sentence or receive help. We can even determine how long they should be sentenced and what their punishment should be. And the determining of the defendant’s genetic predisposition if it is aggravating factor or mitigating factor depends on the crime and how it was carried out.

How The Judges Should Or Shouldn’t Consider The rGE Evidence. (2021, Feb 27). Retrieved from https://papersowl.com/examples/how-the-judges-should-or-shouldnt-consider-the-rge-evidence/

Practice is Based on Evidence in Preventing Dry Eye in Patients