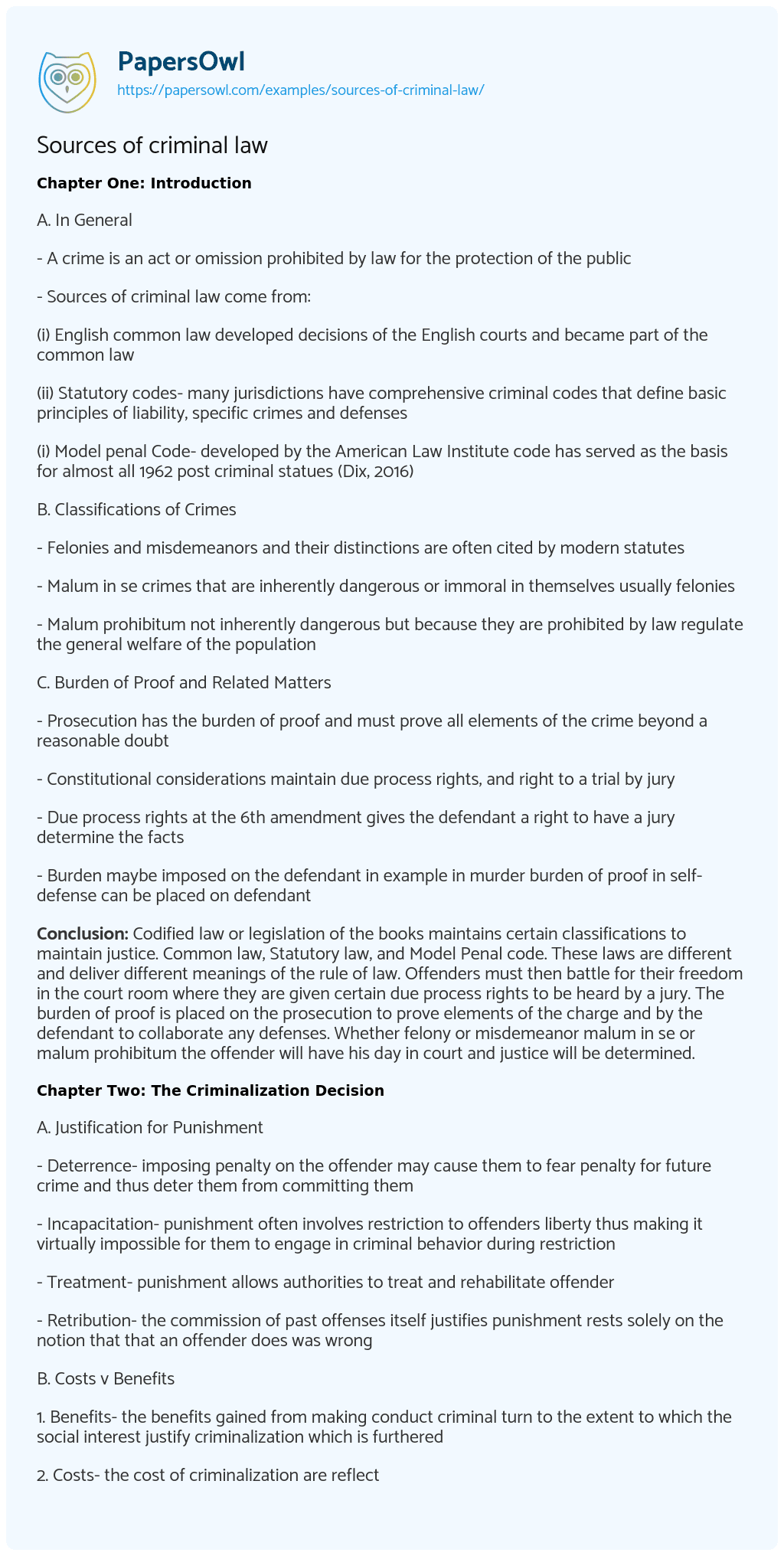 – Sources of criminal law come from:

(i) Model penal Code- developed by the American Law Institute code has served as the basis for almost all 1962 post criminal statues (Dix, 2016)

B. Classifications of Crimes

– Constitutional considerations maintain due process rights, and right to a trial by jury

Conclusion: Codified law or legislation of the books maintains certain classifications to maintain justice. Common law, Statutory law, and Model Penal code. These laws are different and deliver different meanings of the rule of law. Offenders must then battle for their freedom in the court room where they are given certain due process rights to be heard by a jury. The burden of proof is placed on the prosecution to prove elements of the charge and by the defendant to collaborate any defenses. Whether felony or misdemeanor malum in se or malum prohibitum the offender will have his day in court and justice will be determined.

A. Justification for Punishment

1. Benefits- the benefits gained from making conduct criminal turn to the extent to which the social interest justify criminalization which is furthered

2. Costs- the cost of criminalization are reflected in terms of impact upon those who commit the acts

Conclusion: Punishment is the final and complete word in criminal law. It is when the offender has gone through the court process and the jury has reached a determined the guilt of the defendant. When this occurs there are certain costs and benefits of putting a defendant behind bars. Usually society stays safe from the offender reoffending by placing restraint on the liberty of the offender. Through deterrence, incapacitation, rehabilitation, and retribution forms of punishment; the social world frees itself from the weight of criminal activity.

B. Due Process Prohibition Against Vagueness

(i) So that ordinary people can understand

(ii) So as to discourage arbitrary and discrimination

– In some cases the death penalty does not adhered to the 8th amendment and may not be carried out (Dix, 2016)

Conclusion: Criminal statutes need to be clear in order for people to obey the law. If they are not clear and the laymen could not understand them, how ae they to obey the law and know what or what not to do? As far as vagueness is concerned there are certain acts proscribed by law and certain act not. However, some punishments are so unusual as to not fit the crime or the defendants conduct. When this occurs the punishment is determined to be cruel and unusual. According to the 8th amendment cruel and usual punishment is prohibited by law. Some states have even gone as far as to ban certain types of punishments because they are too barbaric.

A. Identifying, Distinguishing, and categorizing elements of crime

– Elements of crimes may be underlined into four categories:

– If not act is required, punishment would be imposed on the basis of mere intent

– Act or omission must demonstrate that the defendant made a conscious volitional movement:

(i) Movement-physical movement of defendant’s body

(ii) Act must be volitional- physical movement must be conscious

(i) Defendant was under a legal duty to act

– There are two basic reasons for Mens Rea:

(ii) Filters out those dangerous to society

Conclusion: There are four components of a crime: Act, result, circumstance, and mens rea. The two most important elements are the criminal act itself and subsequent mens rea of the crime. The act is the failure to obey the proscribe law or the acting out in a criminal act blatantly. A bodily movement by the defendant that makes a crime be committed or the act of omission failing to act in accordance with law. Anyway you put it the act must result in the breaking of a law. The second most important aspect of the crime is the mens rea or the intent of the defendant when he commits the crime. The defendant must be aware that the end result of the crime was likely to occur from his actions. When you have the act and the mens rea you will find the end result of the criminal act and the circumstances leading up to the criminal act.

A. – liability for a crime is not limited to the person who actually commits the proscribed act

– Parties to a crime are classified as

(iii) Accessory after the fact- these who assist others and hinder the prosecution and conviction of the perpetrators (Dix, 2016)

– In accordance with mens rea the abettor must act with purpose

– Under the model penal code, and accomplice may withdraw and avoid liability if:

(i) Wholly depriving his prior assistance with effectiveness

Offenses against the Government, Administration

My Opinion about Criminal Law