How AI is Beneficial to Society 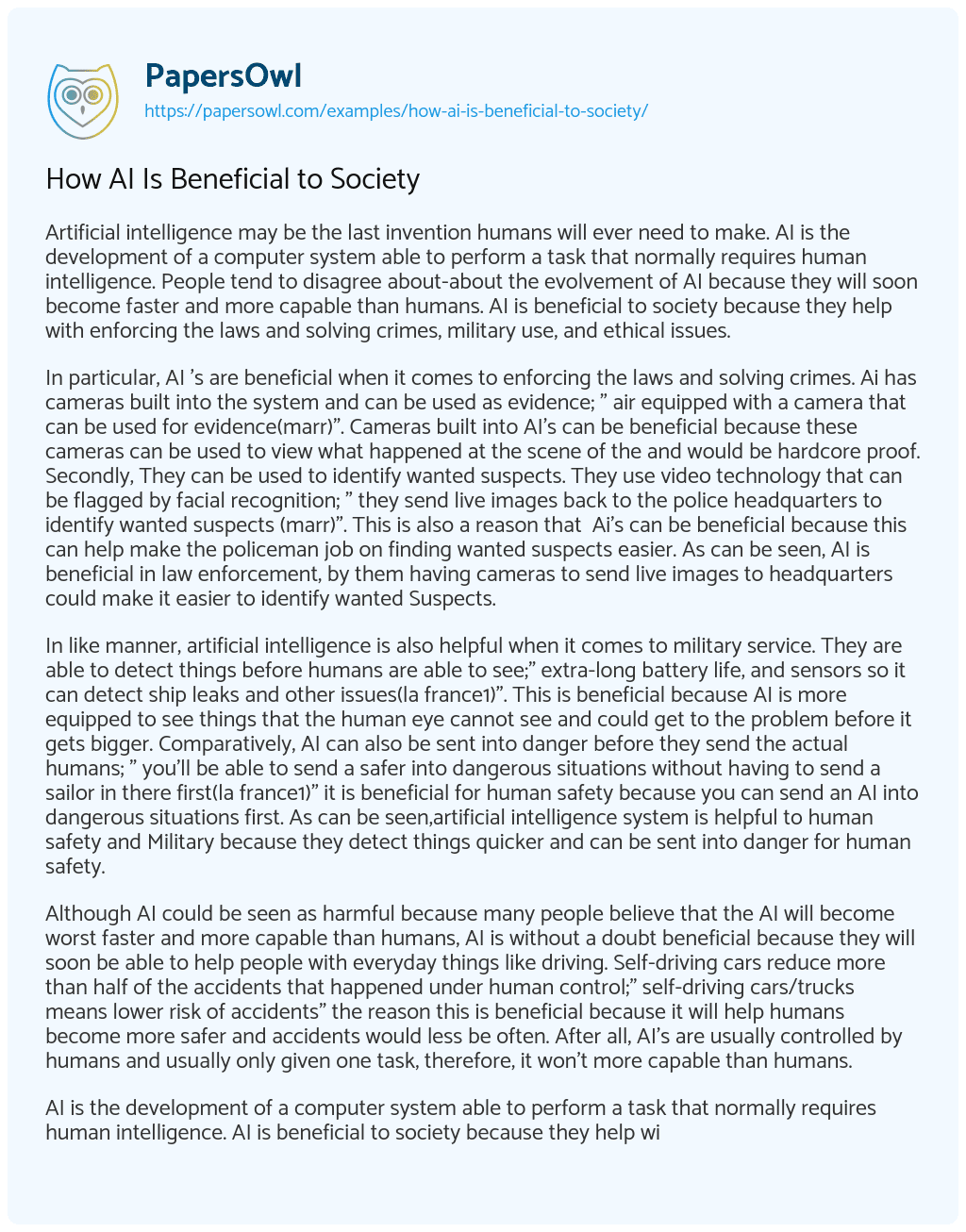 Artificial intelligence may be the last invention humans will ever need to make. AI is the development of a computer system able to perform a task that normally requires human intelligence. People tend to disagree about-about the evolvement of AI because they will soon become faster and more capable than humans. AI is beneficial to society because they help with enforcing the laws and solving crimes, military use, and ethical issues.

In particular, AI ‘s are beneficial when it comes to enforcing the laws and solving crimes. Ai has cameras built into the system and can be used as evidence; ” air equipped with a camera that can be used for evidence(marr)”. Cameras built into AI’s can be beneficial because these cameras can be used to view what happened at the scene of the and would be hardcore proof. Secondly, They can be used to identify wanted suspects. They use video technology that can be flagged by facial recognition; ” they send live images back to the police headquarters to identify wanted suspects (marr)”. This is also a reason that  Ai’s can be beneficial because this can help make the policeman job on finding wanted suspects easier. As can be seen, AI is beneficial in law enforcement, by them having cameras to send live images to headquarters could make it easier to identify wanted Suspects.

In like manner, artificial intelligence is also helpful when it comes to military service. They are able to detect things before humans are able to see;” extra-long battery life, and sensors so it can detect ship leaks and other issues(la france1)”. This is beneficial because AI is more equipped to see things that the human eye cannot see and could get to the problem before it gets bigger. Comparatively, AI can also be sent into danger before they send the actual humans; ” you’ll be able to send a safer into dangerous situations without having to send a sailor in there first(la france1)” it is beneficial for human safety because you can send an AI into dangerous situations first. As can be seen,artificial intelligence system is helpful to human safety and Military because they detect things quicker and can be sent into danger for human safety.

Although AI could be seen as harmful because many people believe that the AI will become worst faster and more capable than humans, AI is without a doubt beneficial because they will soon be able to help people with everyday things like driving. Self-driving cars reduce more than half of the accidents that happened under human control;” self-driving cars/trucks means lower risk of accidents” the reason this is beneficial because it will help humans become more safer and accidents would less be often. After all, AI’s are usually controlled by humans and usually only given one task, therefore, it won’t more capable than humans.

AI is the development of a computer system able to perform a task that normally requires human intelligence. AI is beneficial to society because they help with enforcing the laws and solving crimes, military use, and everyday problems.

How AI Is Beneficial to Society. (2020, Feb 14). Retrieved from https://papersowl.com/examples/how-ai-is-beneficial-to-society/

The Development of AI