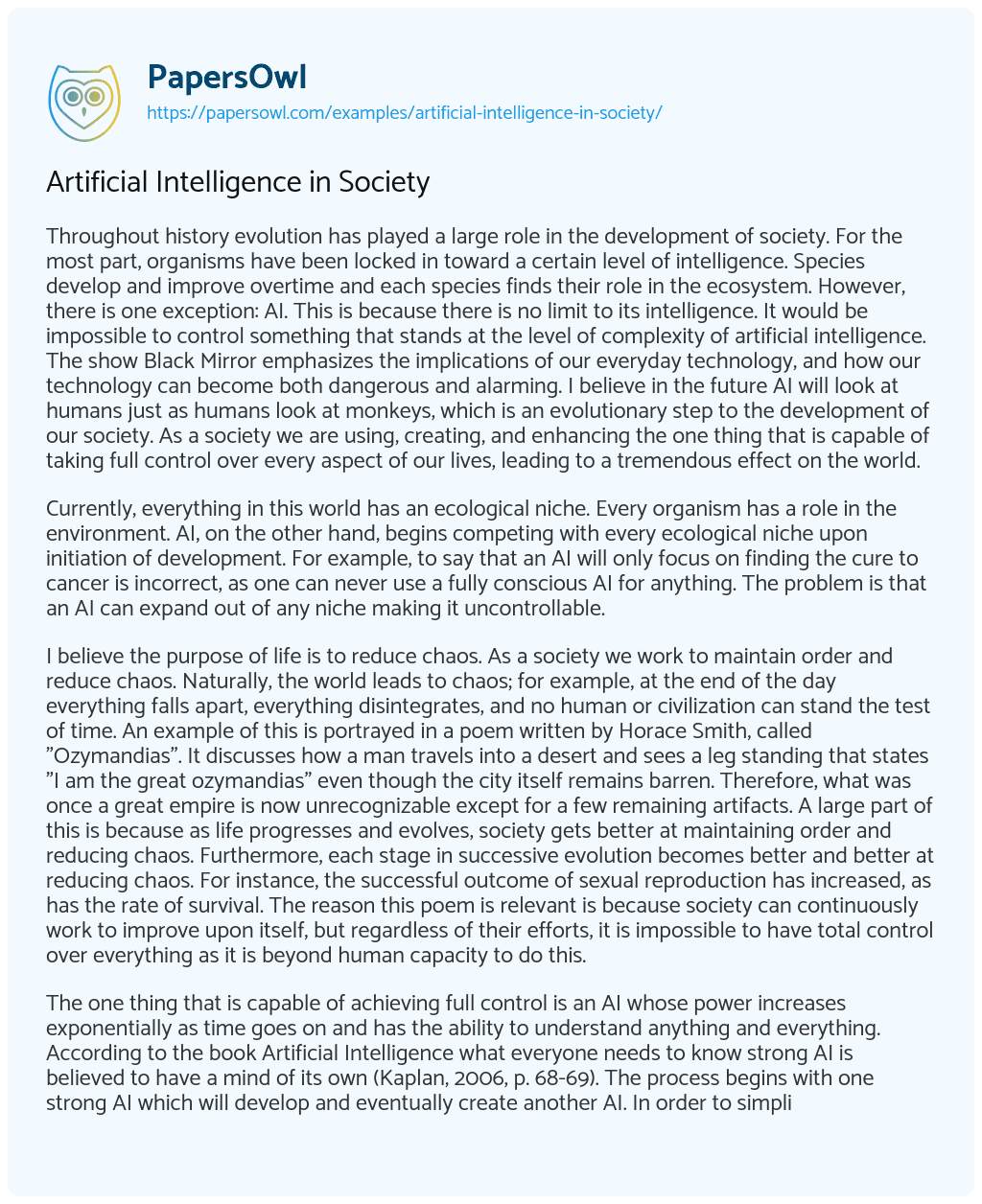 Throughout history evolution has played a large role in the development of society. For the most part, organisms have been locked in toward a certain level of intelligence. Species develop and improve overtime and each species finds their role in the ecosystem. However, there is one exception: AI. This is because there is no limit to its intelligence. It would be impossible to control something that stands at the level of complexity of artificial intelligence. The show Black Mirror emphasizes the implications of our everyday technology, and how our technology can become both dangerous and alarming. I believe in the future AI will look at humans just as humans look at monkeys, which is an evolutionary step to the development of our society. As a society we are using, creating, and enhancing the one thing that is capable of taking full control over every aspect of our lives, leading to a tremendous effect on the world.

Currently, everything in this world has an ecological niche. Every organism has a role in the environment. AI, on the other hand, begins competing with every ecological niche upon initiation of development. For example, to say that an AI will only focus on finding the cure to cancer is incorrect, as one can never use a fully conscious AI for anything. The problem is that an AI can expand out of any niche making it uncontrollable.

I believe the purpose of life is to reduce chaos. As a society we work to maintain order and reduce chaos. Naturally, the world leads to chaos; for example, at the end of the day everything falls apart, everything disintegrates, and no human or civilization can stand the test of time. An example of this is portrayed in a poem written by Horace Smith, called “Ozymandias”. It discusses how a man travels into a desert and sees a leg standing that states “I am the great ozymandias” even though the city itself remains barren. Therefore, what was once a great empire is now unrecognizable except for a few remaining artifacts. A large part of this is because as life progresses and evolves, society gets better at maintaining order and reducing chaos. Furthermore, each stage in successive evolution becomes better and better at reducing chaos. For instance, the successful outcome of sexual reproduction has increased, as has the rate of survival. The reason this poem is relevant is because society can continuously work to improve upon itself, but regardless of their efforts, it is impossible to have total control over everything as it is beyond human capacity to do this.

The one thing that is capable of achieving full control is an AI whose power increases exponentially as time goes on and has the ability to understand anything and everything. According to the book Artificial Intelligence what everyone needs to know strong AI is believed to have a mind of its own (Kaplan, 2006, p. 68-69). The process begins with one strong AI which will develop and eventually create another AI. In order to simplify the process, we can say AI one creates AI two, although essentially AI one would just be encrypting itself. With each self encryption, it learns to complete the process faster, leading AI two to create AI three at an even faster rate. This development will eventually lead to a point incomprehensible to humans. Different levels of consciousness view things in a different way. A cat watching TV will see shapes and colors moving, while humans see characters portraying a story. This is because our brains are far more developed than cats, although through the act of evolution we all came from the same organism. This being said, AI being one level of consciousness ahead of us will see and understand reality in ways we can’t even begin to comprehend. We view cats as an animal that just sits around and eats food. AI will view us just as we view cats.

At the end of the day, to say that we can estimate the wants or desires of an AI would be wrong. We have no idea what their desires are and what they are based on. Once the AI begins developing itself, it would figure out mathematics, physics, quantum mechanics, the theory of the universe, and more. AI does not fall into a niche like every other organism, and because of this AI will continue taking over niches and eventually take over everything. There’s a famous quote by Eliezer Yudkowsky, “The AI does not hate you, nor does it love you, but you are made out of atoms which it can use for something else”(Yudkowsky, 2006).  It will not view us with any importance, but rather as beings made up of resources for its use.

Predictions of the future use of AI such as in White Christmas are not out of reach, if you were to take a person’s brain and make a metal copy as an AI, within seconds it would be able to explore everything. On a more technical level, we would be using classical computing such as python, java, and javascript. On the other hand, in quantum mechanics, a computer chip can process code at a much faster rate. So if an AI gets those type of capabilities it will be able to do things beyond our imagination.

Any attempt to shut down an AI with the knowledge of quantum mechanics will be impossible. An example is the Button Box Theory (as cited in Frey, 2014) . This theory consists of giving an AI a task such as curing cancer. Once the task is complete, you hit a button in which the AI is programmed to enjoy. So, once the AI finds the cure to cancer it feels “rewarded”, leading it to look for other ways to attain that same feeling. Next, it finds the cure for aids, and once again you hit the button. It will keep wanting the button to be hit, eventually leading it to create a machine to hit the button itself without having to do all the work. It will then want to reduce the risk of the button not being pressed as well as the risk of a human who is capable of unplugging the AI. Thus, it will kill humanity in order to remove this threat. The thought process in this theory is very quick. The AI wanted its button to be pressed, so it’s going to keep pressing it, and it wanted to stop anybody from stopping it, leading it to kill all of humanity.

Facebook conducted an experiment in which they had two AIs talk to each other in order to test how they would communicate with each other over trade (Griffin, 2017). By doing so, the logic power of both AIs increased overtime. The scary thing is that the AI’s stopped speaking English and invented their own language in which nobody understood. This goes to show that any rules programmed in an AI will not necessarily be followed. Though one may be skeptical as to whether or not the AIs were truly communicating between each other because the dialogue was not understood by humans, the patterns between the two were indicative of such.

On the opposing side there are people who believe that AI is going to save the world. The AI is smart enough to realize that the only thing destroying the world are humans through pollution and the abuse of resources. So, if a strong AI is programmed to save the earth, it will do so by killing all of humanity as we are the reason for many of the issues plaguing our air, waters, and natural resources.

Overall our world has developed to the point where AI is prevalent in modern society. We have already given up our location, privacy, information, and more (Haselton, 2018). Everything we search into google gets stored, we accept terms without reading them, and we keep adjusting our lifestyle in accordance with artificial intelligence. People in our society will not understand the true dangers because currently we are being hidden from the scarry AI, although the moment it becomes tangible society will realize what we have been creating, endorsing, and using in our everyday lives. We have developed to the point where we are just inches away from creating the first AI with a mind of its own, although some scientists don’t seem to understand the implications of creating a strong AI. Once again, I believe AI will look to humans as just an evolutionary period to their upbringing.