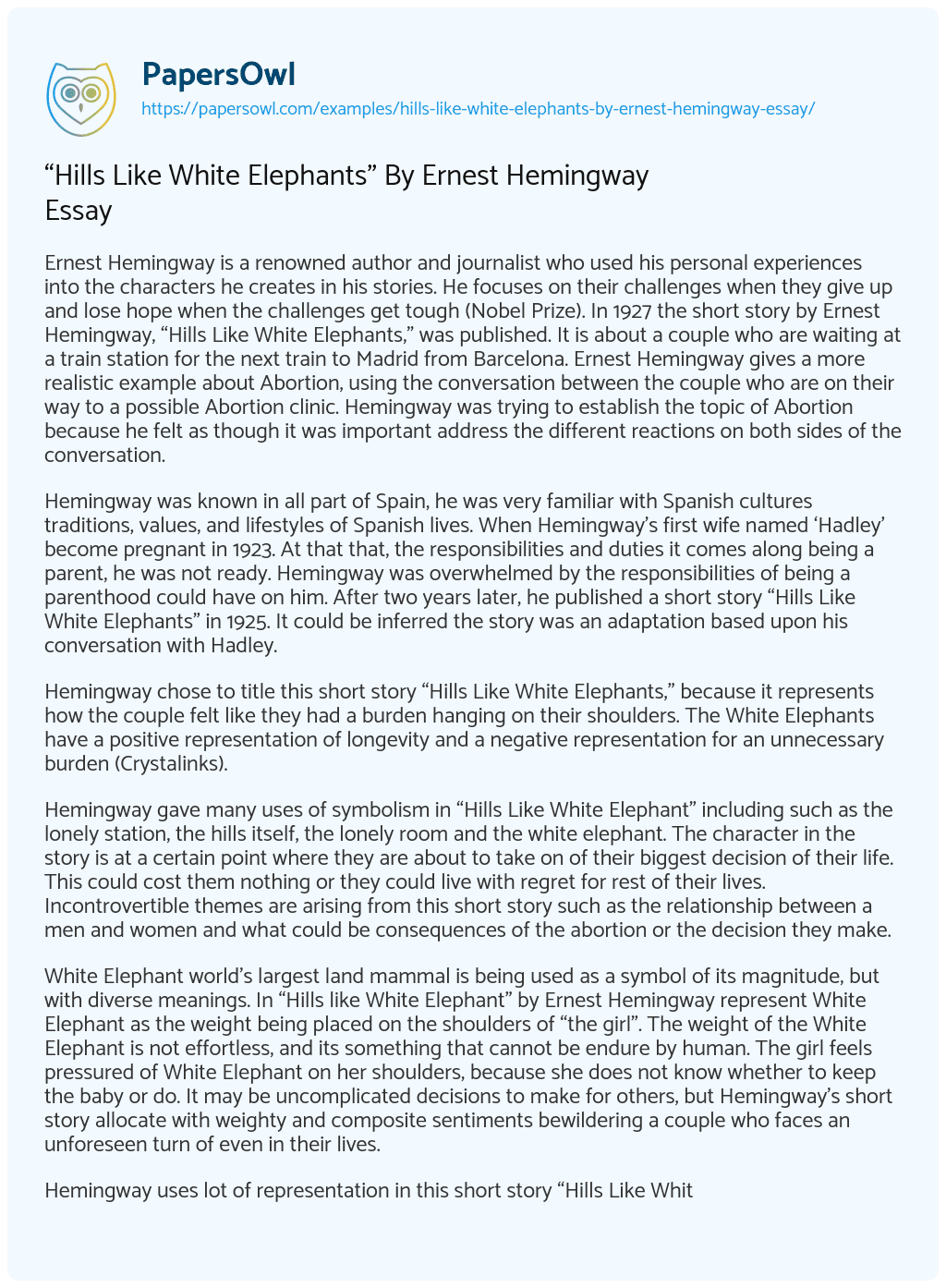 Ernest Hemingway is a renowned author and journalist who used his personal experiences into the characters he creates in his stories. He focuses on their challenges when they give up and lose hope when the challenges get tough (Nobel Prize). In 1927 the short story by Ernest Hemingway, “Hills Like White Elephants,” was published. It is about a couple who are waiting at a train station for the next train to Madrid from Barcelona. Ernest Hemingway gives a more realistic example about Abortion, using the conversation between the couple who are on their way to a possible Abortion clinic. Hemingway was trying to establish the topic of Abortion because he felt as though it was important address the different reactions on both sides of the conversation.

Hemingway was known in all part of Spain, he was very familiar with Spanish cultures traditions, values, and lifestyles of Spanish lives. When Hemingway’s first wife named ‘Hadley’ become pregnant in 1923. At that that, the responsibilities and duties it comes along being a parent, he was not ready. Hemingway was overwhelmed by the responsibilities of being a parenthood could have on him. After two years later, he published a short story “Hills Like White Elephants” in 1925. It could be inferred the story was an adaptation based upon his conversation with Hadley.

Hemingway gave many uses of symbolism in “Hills Like White Elephant” including such as the lonely station, the hills itself, the lonely room and the white elephant. The character in the story is at a certain point where they are about to take on of their biggest decision of their life. This could cost them nothing or they could live with regret for rest of their lives. Incontrovertible themes are arising from this short story such as the relationship between a men and women and what could be consequences of the abortion or the decision they make.

White Elephant world’s largest land mammal is being used as a symbol of its magnitude, but with diverse meanings. In “Hills like White Elephant” by Ernest Hemingway represent White Elephant as the weight being placed on the shoulders of “the girl”. The weight of the White Elephant is not effortless, and its something that cannot be endure by human. The girl feels pressured of White Elephant on her shoulders, because she does not know whether to keep the baby or do. It may be uncomplicated decisions to make for others, but Hemingway’s short story allocate with weighty and composite sentiments bewildering a couple who faces an unforeseen turn of even in their lives.

Hemingway uses lot of representation in this short story “Hills Like White Elephant.” The author shows a lonely railway station which could represent the girl’s own desperate loneliness and an important decision she has to make alone. The girl is feeling lonely and lost in her own thoughts even though she is being companied by a boy. With the use of railway station, it illustrates that “the girl” is in the verge where she has to make a decision, whether to keep the baby or not.

In context of the couple’s conversation they refer back to doing the operation in order to become happy again. “That’s the only thing that bothers us. It’s the only thing that’s made us unhappy,” this explains the symbolism of the white elephants the girl pictures. This further shows their feeling’s as though if they don’t go through with this then they will be unhappy for the rest of their lives.
Hemingway gave this conversation a realistic view on how certain couple’s view this topic. He creates a reassurance between the characters on how they should face this issue before they board the next train to Madrid. He also shows the relationship between them by showing their support for their final decision and their commitment to each other. The author decided to show their relationships during this challenging decision because this can become a real-life situation.

The characters had felt a bit of doubt and to distract themselves they went shopping and drank liquor to distract themselves. This doubt also leads them to reconsider their primary decision and what each of them felt personally about the topic. Hemingway wrote this conversation in the story because it created a visual conflict between the characters and their personal wants.

The reason behind the conflict was to show that each of them cared about each of their opinions. The male character in this short story repeatedly mentioned “I don’t want you to do it if you don’t really want to,” this shows his concern towards the girl he was with. Hemingway also added how the girl wanted to stop talking about the topic and expressed it through her frustration towards the man she was with.

The author used more of a conversation style throughout the text to give a visual of the relationship and effects of a sensitive topic. In addition, the details of the emotions of the characters in the story aid in expressing the emotional toll the topic has on them.  It tends to show frustration and desperation to avoid talking more about it and change their minds. The technique he used made it easier for the readers to understand the interactions between the conflict and moral idea of the text. The female character stated she doesn’t care about herself and implies that their happiness between them is more important than anything. Towards the end of the text Hemingway created a sense of a facade created by the girl in order to forget about considering her options. When the female character stated “I feel fine. There’s nothing wrong with me. I feel fine,” gives the sense of both a facade and the idea she already made up her mind and nothing can change it.

Hemingway wrote this short story to give readers a simpler yet complex insight about Abortion and its emotional toll on couples. Hemingway expressed Abortion this way not to persuade the reader to go for or against abortion. He wrote it to show that major decisions can emotionally drain a person to where they feel okay with their original choice and evade the other choices. In the text Abortion is a major burden to have in the couple’s lives. However, both characters were unsure about how they truly felt when going through with the operation. The couple was an example of a real-life situation that happens in most real couples. Hemingway intended to have the readers gain some exposure to the emotional effects of Abortion instead of creating an average conversation about a couple’s life.