Harmful Side Effects of Synthetic Drugs 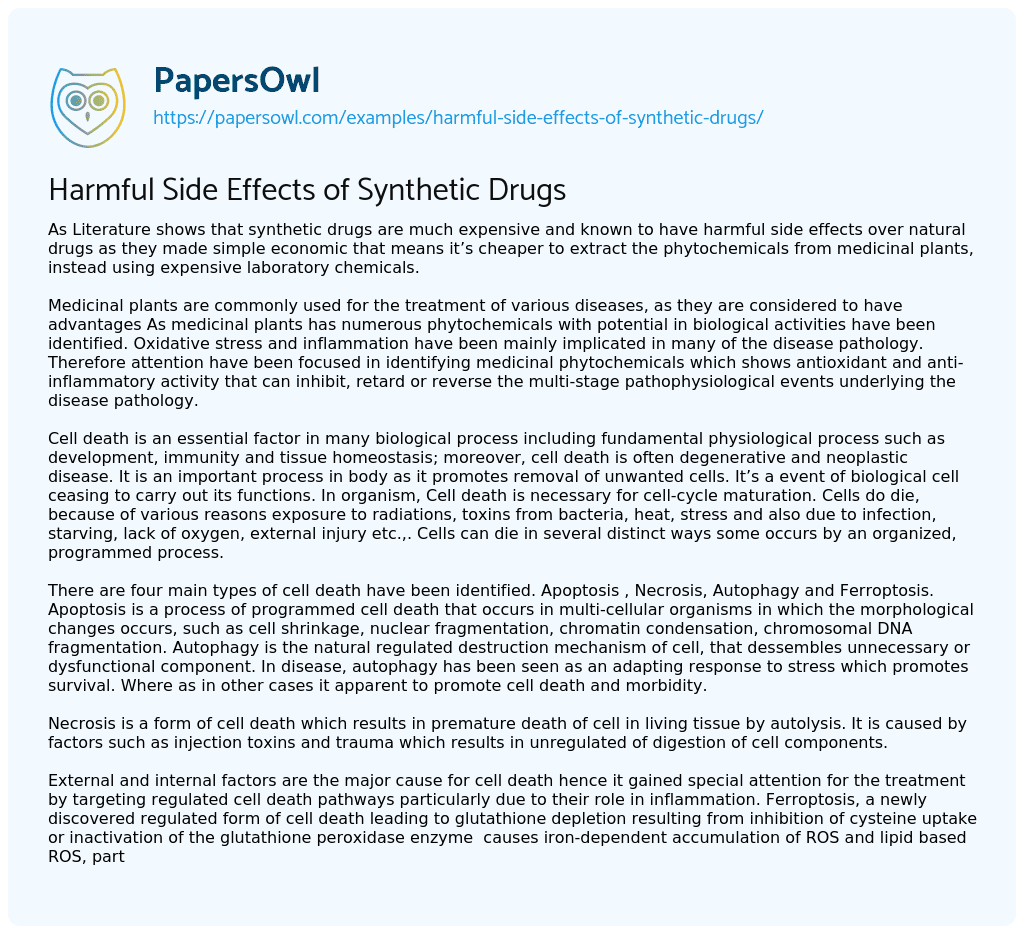 As Literature shows that synthetic drugs are much expensive and known to have harmful side effects over natural drugs as they made simple economic that means it’s cheaper to extract the phytochemicals from medicinal plants, instead using expensive laboratory chemicals.
Medicinal plants are commonly used for the treatment of various diseases, as they are considered to have advantages As medicinal plants has numerous phytochemicals with potential in biological activities have been identified. Oxidative stress and inflammation have been mainly implicated in many of the disease pathology. Therefore attention have been focused in identifying medicinal phytochemicals which shows antioxidant and anti-inflammatory activity that can inhibit, retard or reverse the multi-stage pathophysiological events underlying the disease pathology.
Cell death is an essential factor in many biological process including fundamental physiological process such as development, immunity and tissue homeostasis; moreover, cell death is often degenerative and neoplastic disease. It is an important process in body as it promotes removal of unwanted cells. It’s a event of biological cell ceasing to carry out its functions. In organism, Cell death is necessary for cell-cycle maturation. Cells do die, because of various reasons exposure to radiations, toxins from bacteria, heat, stress and also due to infection, starving, lack of oxygen, external injury etc.,. Cells can die in several distinct ways some occurs by an organized, programmed process.
There are four main types of cell death have been identified. Apoptosis , Necrosis, Autophagy and Ferroptosis. Apoptosis is a process of programmed cell death that occurs in multi-cellular organisms in which the morphological changes occurs, such as cell shrinkage, nuclear fragmentation, chromatin condensation, chromosomal DNA fragmentation. Autophagy is the natural regulated destruction mechanism of cell, that dessembles unnecessary or dysfunctional component. In disease, autophagy has been seen as an adapting response to stress which promotes survival. Where as in other cases it apparent to promote cell death and morbidity.
Necrosis is a form of cell death which results in premature death of cell in living tissue by autolysis. It is caused by factors such as injection toxins and trauma which results in unregulated of digestion of cell components.
External and internal factors are the major cause for cell death hence it gained special attention for the treatment by targeting regulated cell death pathways particularly due to their role in inflammation. Ferroptosis, a newly discovered regulated form of cell death leading to glutathione depletion resulting from inhibition of cysteine uptake or inactivation of the glutathione peroxidase enzyme  causes iron-dependent accumulation of ROS and lipid based ROS, particularly lipid hydroperoxide  a selenoprotein, is the only reduced glutathione peroxidases which handles lipid hydroperoxides and uses GSH to converts non-toxic lipid alcohols from toxic lipid hydroperoxides a tripeptide of glutamate cysteine and glycine, is a well-known intracellular antioxidant protecting cells from oxidative or other forms of stress and serves as a cofactor for glutathione peroxidase and S-trasnferase enzyme families. Inducers of ferroptosis have been discovered through characterizing the mechanism of action using multipronged approaches. There are four classes of ferroptosis inducers currently in use:

In addition to these canonical ferroptosis, several other reagents can induce ferroptosis:

Several genes have serves as markers of ferroptosis:

Ferroptosis induced cell death can be suppressed exclusively by iron chelators, lipophilic antioxidants and inhibitors of lipid peroxidation. Several studies identified lipophilic antioxidants (?-tocopherol, Butylated hydroxytoluene, and ?-carotene) as strong suppressors of erastin-induced cell death [8]. Vitamin E family and flavonoids can inhibit lipoxygenases activity in some contexts [9]. Inhibitor of iron metabolism and iron chelators (deferoxamine and ciclopirox) suppresses ferroptosis by reducing availability of iron [10]. Similarly, ferrostatins and liproxstatins inhibit lipid peroxidation, possibly by acting as radical trapping antioxidants [11], similarly to the lipophilic antioxidants BHT, BHA, and vitamin E.
Following are the numerous reagents that modulate ferroptosis:
According to the past research studies, compounds that inhibit the accumulation of lipid peroxidation have the potential to inhibits ferroptosis and may provide promising therapeutic agents to treat pathological conditions previously thought to be untreatable.
Recently, several inhibitors of ferroptosis have been identified by high thoughtput screening of small molecular library, including liprostatin(figure) they can block pathological cell death events in the brain, kidney and other tissues.
Did you like this example?

Harmful Side Effects of Synthetic Drugs. (2021, May 20). Retrieved from https://papersowl.com/examples/harmful-side-effects-of-synthetic-drugs/

Diseases are Associated with Cell Death

Tight Regulation of Cell Death is Vital during Development

What is UV Light?