What is UV Light? 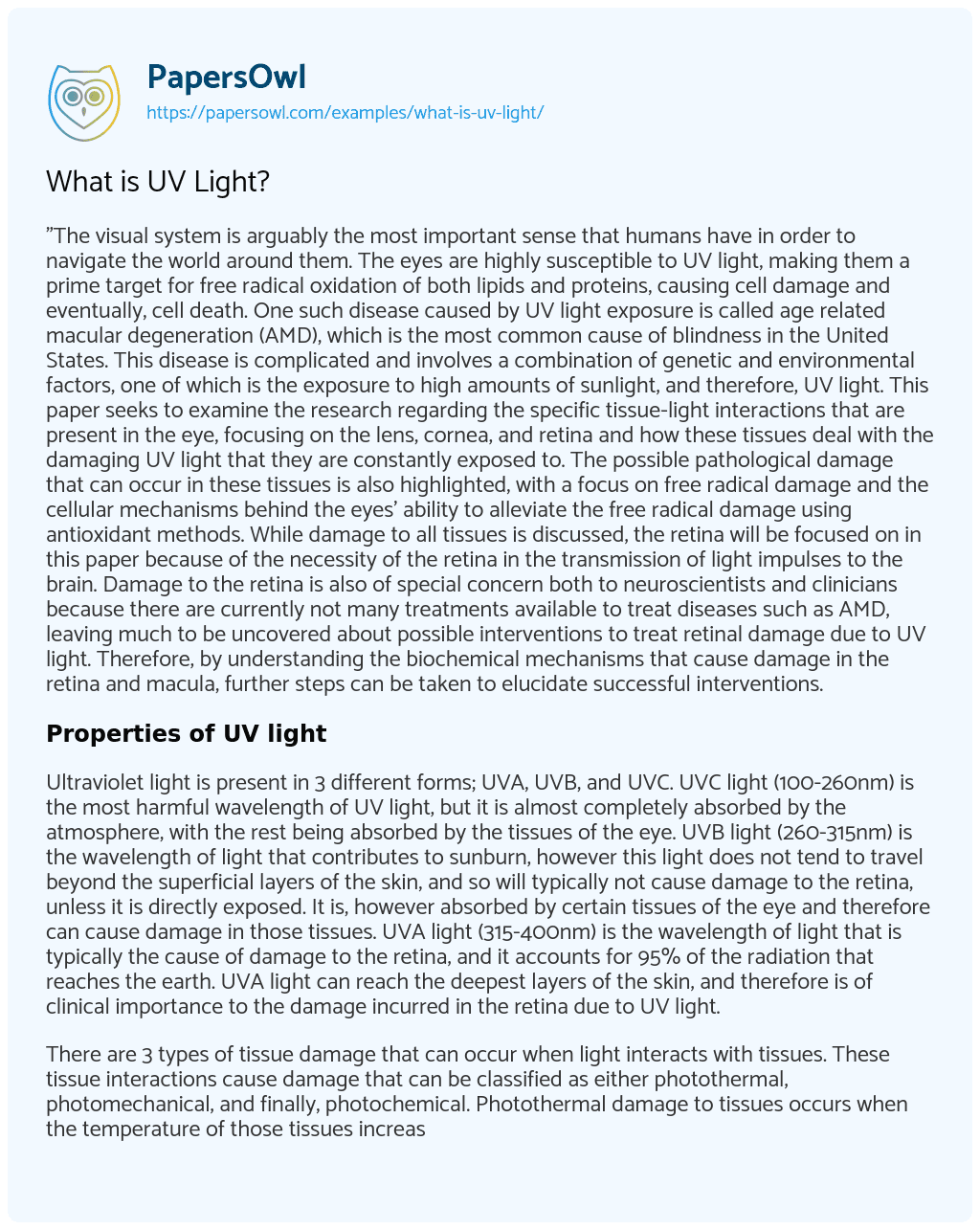 “The visual system is arguably the most important sense that humans have in order to navigate the world around them. The eyes are highly susceptible to UV light, making them a prime target for free radical oxidation of both lipids and proteins, causing cell damage and eventually, cell death. One such disease caused by UV light exposure is called age related macular degeneration (AMD), which is the most common cause of blindness in the United States. This disease is complicated and involves a combination of genetic and environmental factors, one of which is the exposure to high amounts of sunlight, and therefore, UV light. This paper seeks to examine the research regarding the specific tissue-light interactions that are present in the eye, focusing on the lens, cornea, and retina and how these tissues deal with the damaging UV light that they are constantly exposed to. The possible pathological damage that can occur in these tissues is also highlighted, with a focus on free radical damage and the cellular mechanisms behind the eyes’ ability to alleviate the free radical damage using antioxidant methods. While damage to all tissues is discussed, the retina will be focused on in this paper because of the necessity of the retina in the transmission of light impulses to the brain. Damage to the retina is also of special concern both to neuroscientists and clinicians because there are currently not many treatments available to treat diseases such as AMD, leaving much to be uncovered about possible interventions to treat retinal damage due to UV light. Therefore, by understanding the biochemical mechanisms that cause damage in the retina and macula, further steps can be taken to elucidate successful interventions.

Ultraviolet light is present in 3 different forms; UVA, UVB, and UVC. UVC light (100-260nm) is the most harmful wavelength of UV light, but it is almost completely absorbed by the atmosphere, with the rest being absorbed by the tissues of the eye. UVB light (260-315nm) is the wavelength of light that contributes to sunburn, however this light does not tend to travel beyond the superficial layers of the skin, and so will typically not cause damage to the retina, unless it is directly exposed. It is, however absorbed by certain tissues of the eye and therefore can cause damage in those tissues. UVA light (315-400nm) is the wavelength of light that is typically the cause of damage to the retina, and it accounts for 95% of the radiation that reaches the earth. UVA light can reach the deepest layers of the skin, and therefore is of clinical importance to the damage incurred in the retina due to UV light.

There are 3 types of tissue damage that can occur when light interacts with tissues. These tissue interactions cause damage that can be classified as either photothermal, photomechanical, and finally, photochemical. Photothermal damage to tissues occurs when the temperature of those tissues increases to more than 10ºC above the normal temperature (Glickman, 2002). At a biochemical level, this temperature increases causes the denaturation of proteins in cells and causes them to not function correctly (Youssef, 2011). This kind of damage, however, is typically only seen with the use of lasers. Similarly, photomechanical damage has also been attributed to the action of lasers. Photomechanical damage occurs when the introduction of energy occurs so quickly that the tissues are not able to relieve the mechanical stress before damage occurs that is lethal to cells in the retinal pigmented epithelium (Youssef, Glickman). The last form of direct interaction is coined photochemical damage, and this is the damage that leads to free radical oxidation of tissues and will be discussed in detail.

Photochemical damage to tissues is likely due to the generation of free radicals by UV light, which then damage tissues via oxidation. Free radicals are atoms or molecules that have an unpaired electron, therefore they are highly unstable and so they are consistently seeking out another electron in order to be in a more stable conformation. In the eye, and more specifically the retina, there are substances called chromophores which are considered photosensitizers and when incident light hits the eye, these chromophores absorb the light (Glickman, 2011). Once these chromophores absorb the light, they are excited to a reactive state, which can then generate a reactive oxygen species (ROS), an example of a free radical (Glickman, 2011). This free radical is formed when the higher energy that results from the excited state of the chromophore splits another molecule’s bond in order to take an electron, which occurs either by electron or hydrogen exchange (Youssef, 2011). Another free radical that can form is the singlet oxygen species, and this occurs when the energy in the excited chromophore directly transfers that energy to the oxygen (Youssef, 2011). It should be noted that these singlet oxygen species are able to occur in the human eye because biological tissues contain high amounts of oxygen, therefore one of the precursors is readily available. There are some potential candidates for the chromophores in the retina that are responsible for this free radical generation and the subsequent tissue damage that follows. Possible chromophores are “photoreceptors, flavoproteins, heme proteins, melanosomes, and lipofuscin” (Youssef, 2011). It should be noted that when this creation of reactive oxygen species is due to light, the specific name given is photooxidative stress (Foyer, 1994)

There are two kinds of photochemical injury that can result from free radical oxidation of the components of the cells of human eye tissue. The first is type 1 and this is associated with a mechanism that includes rhodopsin and occurs after low-level, visible light exposure (Noell, 1966; Organisciak, 1999). The second type, the more important one for this discussion is type 2 and is associated with activation by UVA exposure at high levels (Glickman, 2011). This type can also be called a “blue-light” form of damage does not have an identifiable chromophore, although lipofuscin has been identified as a highly likely chromophore behind the oxidative damage (Sparrow, 2000).

There are two important oxidation events that can occur after the generation of a free radical species; lipid peroxidation and protein oxidation. Both of these occur when the free radical interacts with the macromolecules and cause their function to be disrupted. During lipid peroxidation the free radical attacks the lipids embedded in the membrane of cells, especially photoreceptor cells, which have a large proportion of lipid containing membranes (Youssef, 2011). When the free radical attacks, it disrupts the function so that the lipid will no longer serve its purpose in the membrane and the whole cells membrane could become impaired. This impairment happens when the ROS takes a hydrogen atom from a polyunsaturated fat, creating a lipid free radical, which continues to create more free radicals and disrupts the membrane (Cabrera, 2011). A similar mechanism happens with protein free radical oxidation, the function of the protein gets disrupted and therefore, it can no longer perform the functions necessary for the cell. The free radical is able to do this by attacking the amino acids that make up the protein, and thereby disrupt the overall structure and function of the protein (Aldred, 2009). One way in which the protein structure and function can be affected by free radicals is that these species can cause amino acid side-chain cross-linking, especially with larger peptides. (Davies, 2016). This could cause impaired bonds between amino acids, as well as larger protein subunits, leading to larger functional deficits. There is evidence of lipid peroxidation that have been found in vivo and in vitro, as well as evidence of protein oxidation by other products that are associated with oxidative stress, specifically carbonyl adducts (Glickman, 2011).

Ultimately, the reactive oxygen species that are present in this biological tissue due to UV light can lead to apoptosis of the cell. This would be especially important in the photoreceptor cells, and since aging causes the repair machinery to work less efficiently, these photoreceptor cells are more susceptible to ROS damages, like apoptosis (Bose, 2018). The response of the ROS in the cell is toxic and it behaves intracellularly through signaling pathways (Bose, 2018). One particular pathway that is affected is the c-Jun NH2-terminal kinase/stress-activated protein kinase (JNK/SAPK), and upon activation and disruption by UV light induced ROS, causes apoptosis of the cell (Bose, 2018). This pathway activates a transcription factor called p53, which is important in controlling cells involved in cell cycle arrest and repair mechanism for DNA, and ultimately apoptosis, if necessary (Bose, 2018). In the study, the transcription factor was looked at in corneal epithelial cells, but could represent possible similarities to the other eye tissues like RPE. This transcription factor is upregulated when there is oxidative damage to the cell, and therefore, there is an indication that this transcription factor could likely lead to the cell death that is associated with oxidative stress (Bose, 2018).”