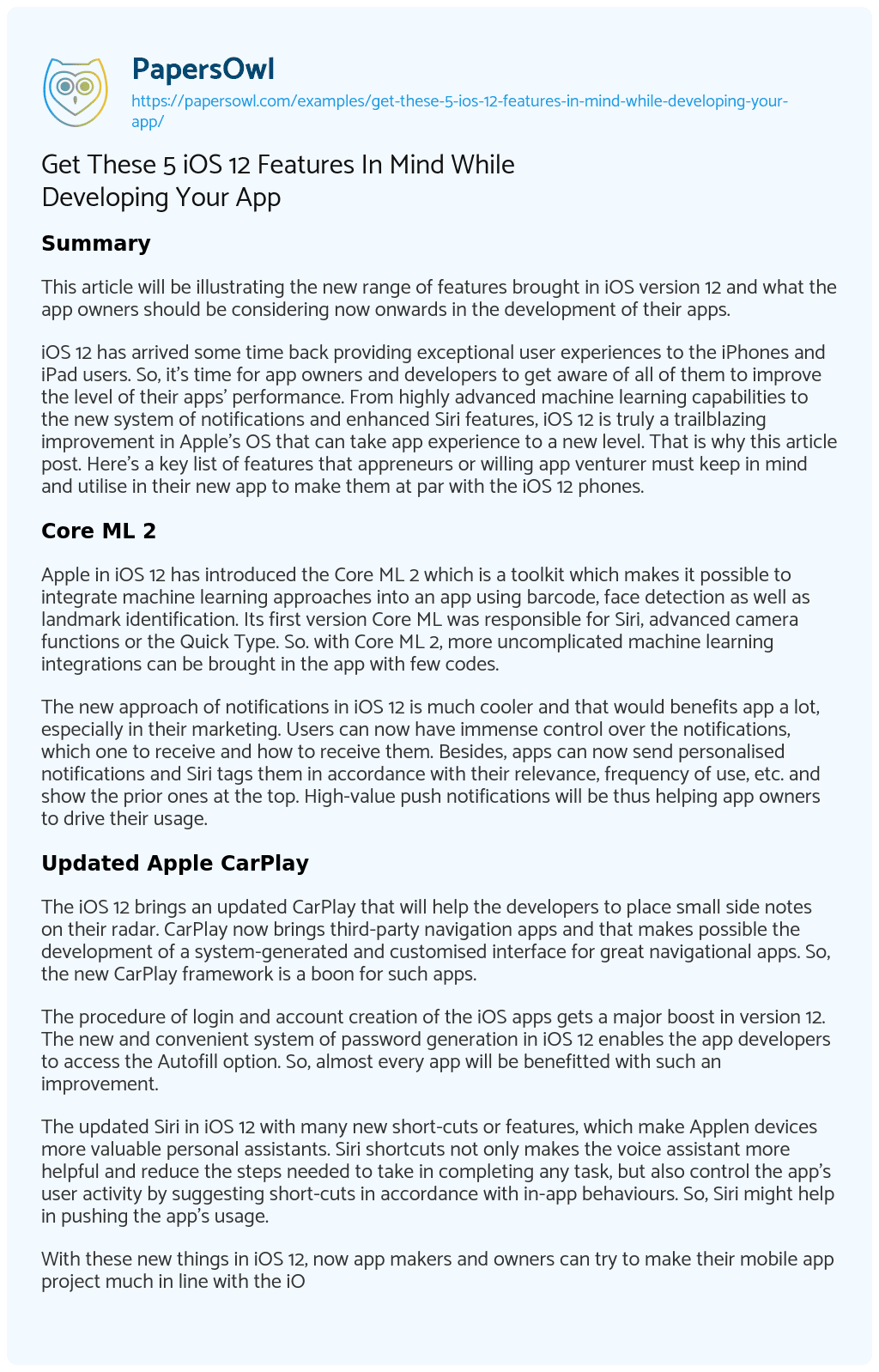 This article will be illustrating the new range of features brought in iOS version 12 and what the app owners should be considering now onwards in the development of their apps.

iOS 12 has arrived some time back providing exceptional user experiences to the iPhones and iPad users. So, it’s time for app owners and developers to get aware of all of them to improve the level of their apps’ performance. From highly advanced machine learning capabilities to the new system of notifications and enhanced Siri features, iOS 12 is truly a trailblazing improvement in Apple’s OS that can take app experience to a new level. That is why this article post. Here’s a key list of features that appreneurs or willing app venturer must keep in mind and utilise in their new app to make them at par with the iOS 12 phones.

Apple in iOS 12 has introduced the Core ML 2 which is a toolkit which makes it possible to integrate machine learning approaches into an app using barcode, face detection as well as landmark identification. Its first version Core ML was responsible for Siri, advanced camera functions or the Quick Type. So. with Core ML 2, more uncomplicated machine learning integrations can be brought in the app with few codes.

The new approach of notifications in iOS 12 is much cooler and that would benefits app a lot, especially in their marketing. Users can now have immense control over the notifications, which one to receive and how to receive them. Besides, apps can now send personalised notifications and Siri tags them in accordance with their relevance, frequency of use, etc. and show the prior ones at the top. High-value push notifications will be thus helping app owners to drive their usage.

The iOS 12 brings an updated CarPlay that will help the developers to place small side notes on their radar. CarPlay now brings third-party navigation apps and that makes possible the development of a system-generated and customised interface for great navigational apps. So, the new CarPlay framework is a boon for such apps.

The procedure of login and account creation of the iOS apps gets a major boost in version 12. The new and convenient system of password generation in iOS 12 enables the app developers to access the Autofill option. So, almost every app will be benefitted with such an improvement.

The updated Siri in iOS 12 with many new short-cuts or features, which make Applen devices more valuable personal assistants. Siri shortcuts not only makes the voice assistant more helpful and reduce the steps needed to take in completing any task, but also control the app’s user activity by suggesting short-cuts in accordance with in-app behaviours. So, Siri might help in pushing the app’s usage.

With these new things in iOS 12, now app makers and owners can try to make their mobile app project much in line with the iOS new functionalities. That will surely raise the app’s usage. So, to make your app more successful, you should be hiring some experienced, adept iPhone app developers who know bit by bit of the new versions and will get your app moulded with new functionalities of the phones.

Get These 5 iOS 12 Features In Mind While Developing Your App. (2021, Apr 15). Retrieved from https://papersowl.com/examples/get-these-5-ios-12-features-in-mind-while-developing-your-app/

Why IOS? here are Reasons why you should Choose IOS over Android!