Gender Inequlaity in the Workplace in the United States 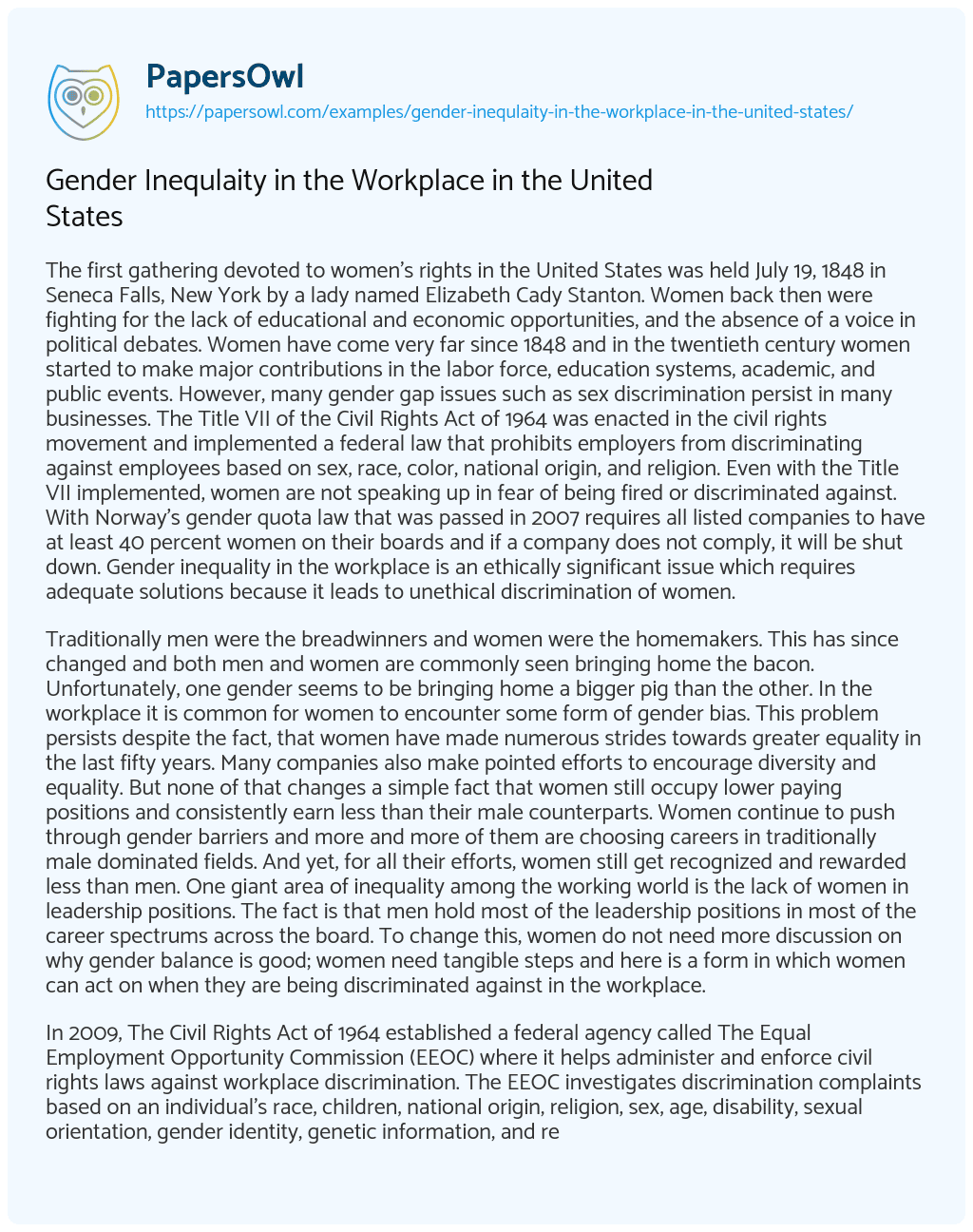 The first gathering devoted to women’s rights in the United States was held July 19, 1848 in Seneca Falls, New York by a lady named Elizabeth Cady Stanton. Women back then were fighting for the lack of educational and economic opportunities, and the absence of a voice in political debates. Women have come very far since 1848 and in the twentieth century women started to make major contributions in the labor force, education systems, academic, and public events. However, many gender gap issues such as sex discrimination persist in many businesses. The Title VII of the Civil Rights Act of 1964 was enacted in the civil rights movement and implemented a federal law that prohibits employers from discriminating against employees based on sex, race, color, national origin, and religion. Even with the Title VII implemented, women are not speaking up in fear of being fired or discriminated against. With Norway’s gender quota law that was passed in 2007 requires all listed companies to have at least 40 percent women on their boards and if a company does not comply, it will be shut down. Gender inequality in the workplace is an ethically significant issue which requires adequate solutions because it leads to unethical discrimination of women.

Traditionally men were the breadwinners and women were the homemakers. This has since changed and both men and women are commonly seen bringing home the bacon. Unfortunately, one gender seems to be bringing home a bigger pig than the other. In the workplace it is common for women to encounter some form of gender bias. This problem persists despite the fact, that women have made numerous strides towards greater equality in the last fifty years. Many companies also make pointed efforts to encourage diversity and equality. But none of that changes a simple fact that women still occupy lower paying positions and consistently earn less than their male counterparts. Women continue to push through gender barriers and more and more of them are choosing careers in traditionally male dominated fields. And yet, for all their efforts, women still get recognized and rewarded less than men. One giant area of inequality among the working world is the lack of women in leadership positions. The fact is that men hold most of the leadership positions in most of the career spectrums across the board. To change this, women do not need more discussion on why gender balance is good; women need tangible steps and here is a form in which women can act on when they are being discriminated against in the workplace.

In 2009, The Civil Rights Act of 1964 established a federal agency called The Equal Employment Opportunity Commission (EEOC) where it helps administer and enforce civil rights laws against workplace discrimination. The EEOC investigates discrimination complaints based on an individual’s race, children, national origin, religion, sex, age, disability, sexual orientation, gender identity, genetic information, and retaliation for reporting, participating in, and/or opposing a discriminatory practice. Though the EEOC helps in certain aspects with workplace discrimination, but you have go through four stages to see if your case will even be considered or dismissed. If the laws do not apply to your claims, if the charge was not filed within the law’s time limits, or if the EEOC decides to limit its investigation, the EEOC will dismiss the charge without any further investigation and notify you of your legal rights.

Norway was the first country in the world to pass a gender quota law for boards 10 years ago. “The outcome in Norway has been largely positive as directors’ experience of the change has helped to dispel some of the entrenched stereotypical thinking about women’s career ambitions and abilities”. (Foster, Angela R, pg.410). Another lesson learned from Norway’s quota law is that gender balanced boards also spread to companies where it is not enforced. Other countries including France, Malaysia, Belgium, Iceland, Italy, the Netherlands and Spain followed suit in order to break the glass ceiling preventing women from reaching top business positions. Gender quotas should no longer be seen as radical concept nor a shock to regulatory or economic systems. Norway shows how the policy can be a realistic and a successful tool that creates real improvements in the way companies are run and achieve greater gender parity. California is the first state in the United States to take the first step to start the legislation to start the gender quota law that requires women on corporate boards. On September 30, 2018 Gov. Jerry Brown signed the bill (S.B. 826), that will require all publicly traded companies with headquarters in California to have at least one woman on their board of directors by the end of 2019. The minimum requisite will increase to two by the end of 2021.

A variety of concerns have been expressed about the implementation of this law, including fears that the quota will impair company performance and the quality of the talent pool, or the belief that it discriminates against men and stigmatizes women. The advantages of a gender quota should diminish these concerns since, in the long term, it contributes to impair gender stereotypes and consequently also subdue the negative impact these stereotypes have on the selection of the best candidates for senior management positions. If all the states in the U.S. pass this bill, then women and men would be considered equal in the workplace. In addition, when a man or woman apply for a leadership position such as a CEO, they will have to acquire the position with their skills and knowledge and not by having preferential treatment.

Commission was set in place for women to speak up when they are discriminated against, but women hold back and don’t report the description. Women stay and put up with offense also because they need the job to support their families. Women may feel like they don’t have another choice. But, women should know their rights as U.S. workers and take responsibility for helping to stop rights violations in the workplace. Hillary Clinton once said, “women’s rights are human right”, women are entitled to all the rights. Winning rights for women, is about more than giving opportunities to any individual woman or girl; it is also about changing how countries and communities work. It involves changing laws and policies, winning hearts and minds, and investing in strong women’s organizations and movements. Only when women have full access to their rights from equal pay and leadership, then will true equality exist in the workplace.

Gender Inequlaity in the Workplace in the United States. (2021, May 03). Retrieved from https://papersowl.com/examples/gender-inequlaity-in-the-workplace-in-the-united-states/

Gender Discrimination in the Workplace