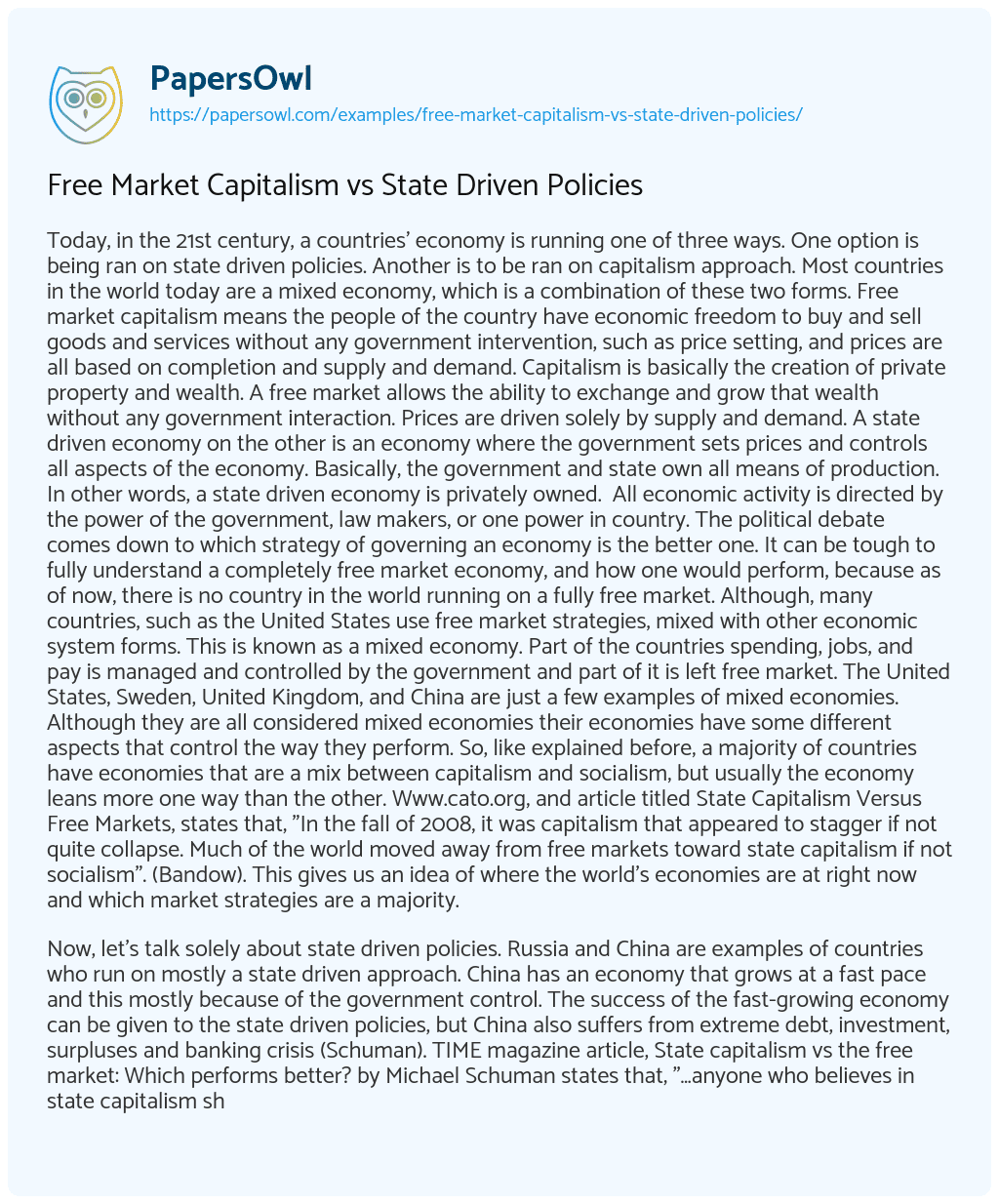 Today, in the 21st century, a countries’ economy is running one of three ways. One option is being ran on state driven policies. Another is to be ran on capitalism approach. Most countries in the world today are a mixed economy, which is a combination of these two forms. Free market capitalism means the people of the country have economic freedom to buy and sell goods and services without any government intervention, such as price setting, and prices are all based on completion and supply and demand. Capitalism is basically the creation of private property and wealth. A free market allows the ability to exchange and grow that wealth without any government interaction. Prices are driven solely by supply and demand. A state driven economy on the other is an economy where the government sets prices and controls all aspects of the economy. Basically, the government and state own all means of production. In other words, a state driven economy is privately owned.  All economic activity is directed by the power of the government, law makers, or one power in country. The political debate comes down to which strategy of governing an economy is the better one. It can be tough to fully understand a completely free market economy, and how one would perform, because as of now, there is no country in the world running on a fully free market. Although, many countries, such as the United States use free market strategies, mixed with other economic system forms. This is known as a mixed economy. Part of the countries spending, jobs, and pay is managed and controlled by the government and part of it is left free market. The United States, Sweden, United Kingdom, and China are just a few examples of mixed economies. Although they are all considered mixed economies their economies have some different aspects that control the way they perform. So, like explained before, a majority of countries have economies that are a mix between capitalism and socialism, but usually the economy leans more one way than the other. Www.cato.org, and article titled State Capitalism Versus Free Markets, states that, “In the fall of 2008, it was capitalism that appeared to stagger if not quite collapse. Much of the world moved away from free markets toward state capitalism if not socialism”. (Bandow). This gives us an idea of where the world’s economies are at right now and which market strategies are a majority.

Now, let’s talk solely about state driven policies. Russia and China are examples of countries who run on mostly a state driven approach. China has an economy that grows at a fast pace and this mostly because of the government control. The success of the fast-growing economy can be given to the state driven policies, but China also suffers from extreme debt, investment, surpluses and banking crisis (Schuman). TIME magazine article, State capitalism vs the free market: Which performs better? by Michael Schuman states that, “…anyone who believes in state capitalism should take a visit to Russia, which I did recently for a recent story in TIME magazine”. Schuman got an inside look at Russia and the lives of citizens during his trip and this is the statement he made after his experience and findings. This goes to show all the wrong that could be taking place under Russia’s economy. There are plenty of reasons as to why state driven policies can do more harm than good in governments. Having a government that is in full control of the economy can impact the freedom of citizens in a country. The citizens no longer have a say in what they do economically speaking. Their jobs and pay are all controlled by the government. So, if a country were claiming to not be a communist country but were running their economy with a full socialism approach then they would be contradicting themselves. Because no freedom, and full government control sounds exactly like a country with absolute rule, and the world has worked to move away from having countries like this for many good reasons and for the protection of the freedom of the people of the world. Communism and socialism go hand in hand.

As North Korea and South Korea are two countries who share a border and similar names, it is no secret their economies are opposites. North Korea is a communist country ran strictly by the state. It is one of the most isolated countries in the world. Since it is ran using state driven policies the government controls jobs, wages, taxes, and every single aspect of the countries economy. People in North Korea are shut up from the rest of the world in many ways. Here in the United States, for example, citizens use the internet freely to interact with almost anyone, anywhere. In North Korea there are many strict rules on the use of internet, any entertainment in general. Although, their form of government may not seem to have relation to the freedom and joy of their people, it does. State driven means government control, not freedom. When an over powerful government and leaders control every dollar spent and made in an economy this gives no room for growth for individuals. Citizens of a state driven country have set wages and spending which seems like an overwhelming about of control and seems although it must lead to unhappy individuals leaving in a poorly ran country. South Korea, on the other hand is a mixed economy using capitalist approaches. South Korea has economic growth rate of more than 6 percent, and their GDP is much higher than North Koreas. People of South Korea have the freedom to buy and sell goods as they please, for the most part. Individuals are able to produce and sell and work hard to increase their salaries. The freedom they have, with a small amount, but efficient, government input has made them one of the fastest growing and successful economies, all while having citizens with freedom and desire to work hard for themselves, and their economy.

Philosopher Francis Fukuyama wrote a book called The End of History? in 1992. Fukuyama wrote, “What we may me be witnessing is not just the end of the Cold Car, or the passing of a particular period of postwar history, but the end of history as such; that is, the end point of mankind’s ideological evolution and the universalization of Western liberal democracy as the final form of government. Basically, Fukuyama was saying that liberal democracy will be the final form of government, as there is no way to advance from that to a different form of government. He came up with this thought, after the events of the Cold War and during the transition into a drastically different era, that a free market economy would be the economy that countries of the world ran on. The fall of communism had occurred, and he presented in his essay that free market democracy had won on over other forms. Fukuyama was a former student of the American professor Samuel P. Huntington, and in response to Fukuyama’s book about the fall of communism post Cold War, Huntington wrote what was called the “clash of civilization theory” on 1993, which was a hypothesis that religion and culture would be the conflict between cultures, and not so much just countries.

Also, post-Cold War era, in 1994 journalist Robert D. Kaplan wrote his predictions by stating a world, “in which criminal anarchy emerges as the real ‘strategic’ danger. “Coming of Anarchy” is what Kaplans book of concerns was titled. He was concerned that with population increases that scarcity of resources would occur. He predicted the world would follow down such path that West Africa was. Many people believe Kaplan failed to realize that a mans need for resources and supplies would cause innovation and advance in technology. For example, in the early 1990’s GMO’s became a widely use resource to prevent scarcity of crops and such. There was a change in Kaplans predictions in 2011, as he changed his beliefs to say that the South China Sea is now where conflicts would arise.

An illiberal democracy is basically a form of government where elections for power of leadership does occur, but citizens are left in the dark about certain activities taken place by the powerful leaders in their government. Fareed Zakaria, in 1996, made a concern that illiberal democracies would take over as the most popular form of government. As democracies are a common form of government that means “rule by people” meaning the people of the country have much voice and power by practice of voting, Kaplans concerns were valid, after the events of what had occurred leading up to 1996. Countries had much unsteady events playing out in their governments and citizens felt as if they were uninvolved, powerless, and clueless about the fast pace changing and events taking place in their economy. Many agreed illiberal democracies would begin to become widespread. The concern was valid, and the fear of citizens being controlled, and powerless was a valid worry.

Mixed economy, with more capitalist policies than state driven, as mentioned previously, seems to be the most successful form of economy. South Korea and the United States are just two examples of extremely large economies that grow at a fast pace. Their form of government is effective and has withstood many years of trials and tribulations. The government programs, salaries, taxes, and voting are all things that a capitalist economy use to keep their country on a good economic track, but while also giving people of a country the power and freedom to live and grow as they please.

The War System of Colombia Capitalism