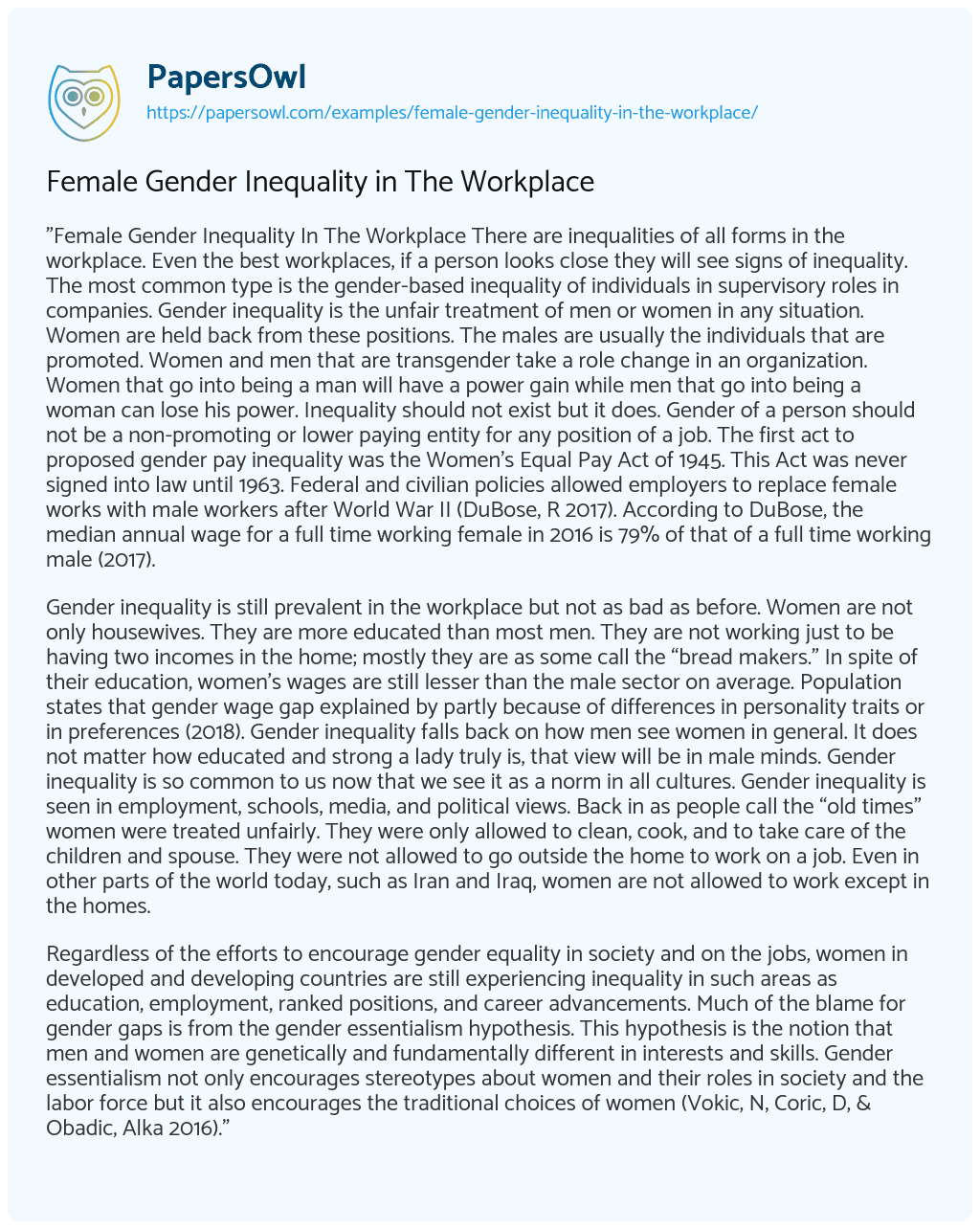 “Female Gender Inequality In The Workplace There are inequalities of all forms in the workplace. Even the best workplaces, if a person looks close they will see signs of inequality. The most common type is the gender-based inequality of individuals in supervisory roles in companies. Gender inequality is the unfair treatment of men or women in any situation. Women are held back from these positions. The males are usually the individuals that are promoted. Women and men that are transgender take a role change in an organization. Women that go into being a man will have a power gain while men that go into being a woman can lose his power. Inequality should not exist but it does. Gender of a person should not be a non-promoting or lower paying entity for any position of a job. The first act to proposed gender pay inequality was the Women’s Equal Pay Act of 1945. This Act was never signed into law until 1963. Federal and civilian policies allowed employers to replace female works with male workers after World War II (DuBose, R 2017). According to DuBose, the median annual wage for a full time working female in 2016 is 79% of that of a full time working male (2017).

Gender inequality is still prevalent in the workplace but not as bad as before. Women are not only housewives. They are more educated than most men. They are not working just to be having two incomes in the home; mostly they are as some call the “bread makers.” In spite of their education, women’s wages are still lesser than the male sector on average. Population states that gender wage gap explained by partly because of differences in personality traits or in preferences (2018). Gender inequality falls back on how men see women in general. It does not matter how educated and strong a lady truly is, that view will be in male minds. Gender inequality is so common to us now that we see it as a norm in all cultures. Gender inequality is seen in employment, schools, media, and political views. Back in as people call the “old times” women were treated unfairly. They were only allowed to clean, cook, and to take care of the children and spouse. They were not allowed to go outside the home to work on a job. Even in other parts of the world today, such as Iran and Iraq, women are not allowed to work except in the homes.

Regardless of the efforts to encourage gender equality in society and on the jobs, women in developed and developing countries are still experiencing inequality in such areas as education, employment, ranked positions, and career advancements. Much of the blame for gender gaps is from the gender essentialism hypothesis. This hypothesis is the notion that men and women are genetically and fundamentally different in interests and skills. Gender essentialism not only encourages stereotypes about women and their roles in society and the labor force but it also encourages the traditional choices of women (Vokic, N, Coric, D, & Obadic, Alka 2016).”

Female Gender Inequality in The Workplace. (2021, Jun 16). Retrieved from https://papersowl.com/examples/female-gender-inequality-in-the-workplace/

Gender Inequality in the Workplace in the Show “Good Trouble”