Essay about Love Thy Enemy 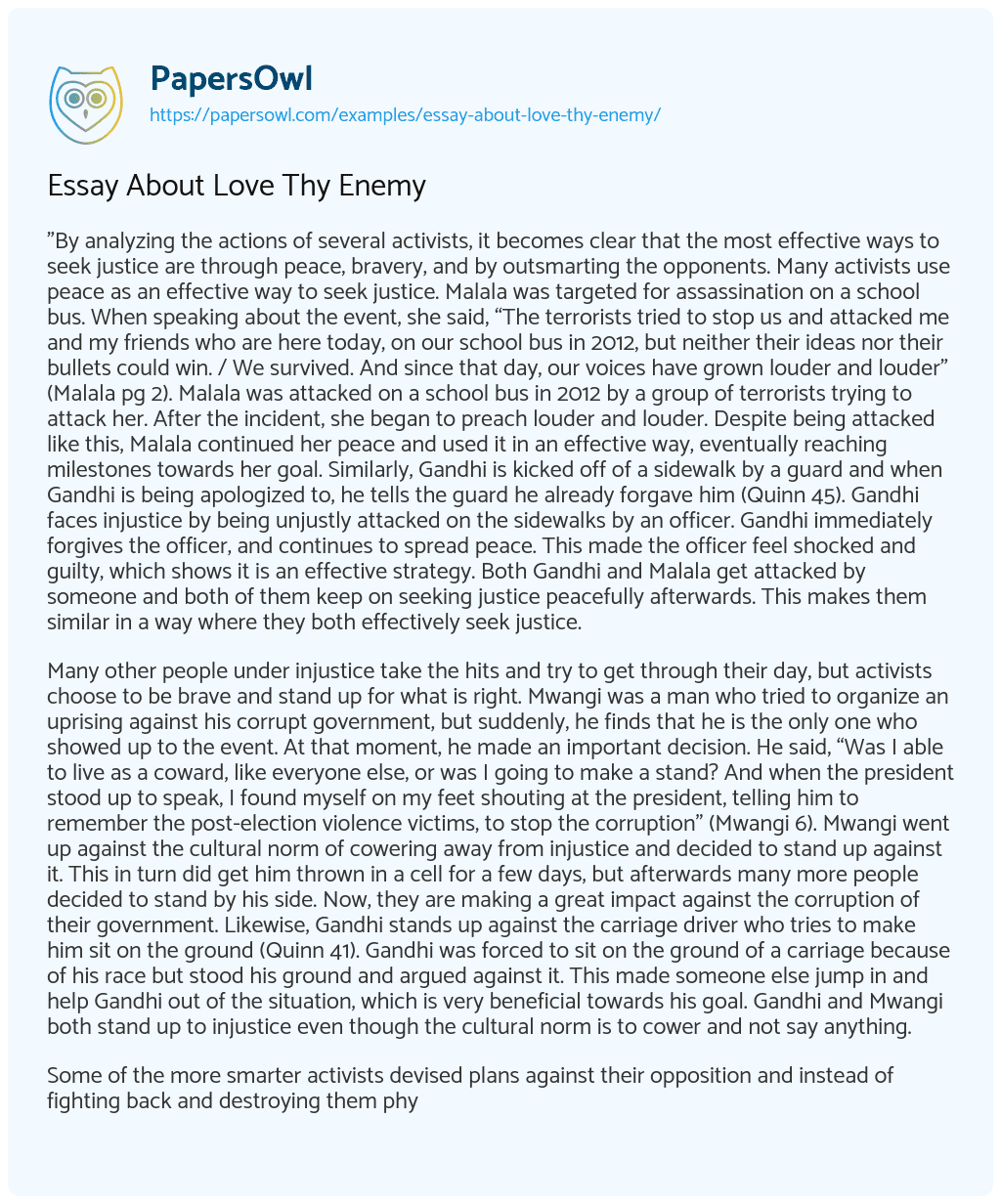 “By analyzing the actions of several activists, it becomes clear that the most effective ways to seek justice are through peace, bravery, and by outsmarting the opponents. Many activists use peace as an effective way to seek justice. Malala was targeted for assassination on a school bus. When speaking about the event, she said, “The terrorists tried to stop us and attacked me and my friends who are here today, on our school bus in 2012, but neither their ideas nor their bullets could win. / We survived. And since that day, our voices have grown louder and louder” (Malala pg 2). Malala was attacked on a school bus in 2012 by a group of terrorists trying to attack her. After the incident, she began to preach louder and louder. Despite being attacked like this, Malala continued her peace and used it in an effective way, eventually reaching milestones towards her goal. Similarly, Gandhi is kicked off of a sidewalk by a guard and when Gandhi is being apologized to, he tells the guard he already forgave him (Quinn 45). Gandhi faces injustice by being unjustly attacked on the sidewalks by an officer. Gandhi immediately forgives the officer, and continues to spread peace. This made the officer feel shocked and guilty, which shows it is an effective strategy. Both Gandhi and Malala get attacked by someone and both of them keep on seeking justice peacefully afterwards. This makes them similar in a way where they both effectively seek justice.

Many other people under injustice take the hits and try to get through their day, but activists choose to be brave and stand up for what is right. Mwangi was a man who tried to organize an uprising against his corrupt government, but suddenly, he finds that he is the only one who showed up to the event. At that moment, he made an important decision. He said, “Was I able to live as a coward, like everyone else, or was I going to make a stand? And when the president stood up to speak, I found myself on my feet shouting at the president, telling him to remember the post-election violence victims, to stop the corruption” (Mwangi 6). Mwangi went up against the cultural norm of cowering away from injustice and decided to stand up against it. This in turn did get him thrown in a cell for a few days, but afterwards many more people decided to stand by his side. Now, they are making a great impact against the corruption of their government. Likewise, Gandhi stands up against the carriage driver who tries to make him sit on the ground (Quinn 41). Gandhi was forced to sit on the ground of a carriage because of his race but stood his ground and argued against it. This made someone else jump in and help Gandhi out of the situation, which is very beneficial towards his goal. Gandhi and Mwangi both stand up to injustice even though the cultural norm is to cower and not say anything.

Some of the more smarter activists devised plans against their opposition and instead of fighting back and destroying them physically, they go for a much different approach. Raquib figured out a clever way to think about how nonviolent protests. They think that, “Nonviolent struggle works by destroying an opponent, not physically, but by identifying the institutions that an opponent needs to survive, and then denying them those sources of power” (Raquib 6). Raquib and a group of other activists devised and created a plan to take down a very powerful leader, plaguing his nation with injustices. Raquib and many others decided to skip out on going to work and after just 4 days, the leader stepped down. This shows that it was an effective tactic and brought them down without violence. Equivalently, Gandhi organized a salt mine protest, which was a very important mineral to the government at the time (Quinn 87). Britain had many taxes put on India, especially for many minerals that they had. Gandhi and a group of salt miners decided to go on strike, so that the government receives little to no money from the shortage of salt. The even decided to march hundreds of miles to protest. Clearly, this idea worked because the British government gave up on the salt tax. Both Gandhi and Raquib found strong points in their opposition and made them their weak points.

By examining the ways of many justice seekers, it becomes obvious that the best ways to seek justice are through peace, bravery, and by outsmarting the injustice. Do you face injustices often? If so, what are some of the ways you deal with it? Do you implement some of these many strategies?

Essay About Love Thy Enemy. (2021, Jul 05). Retrieved from https://papersowl.com/examples/essay-about-love-thy-enemy/