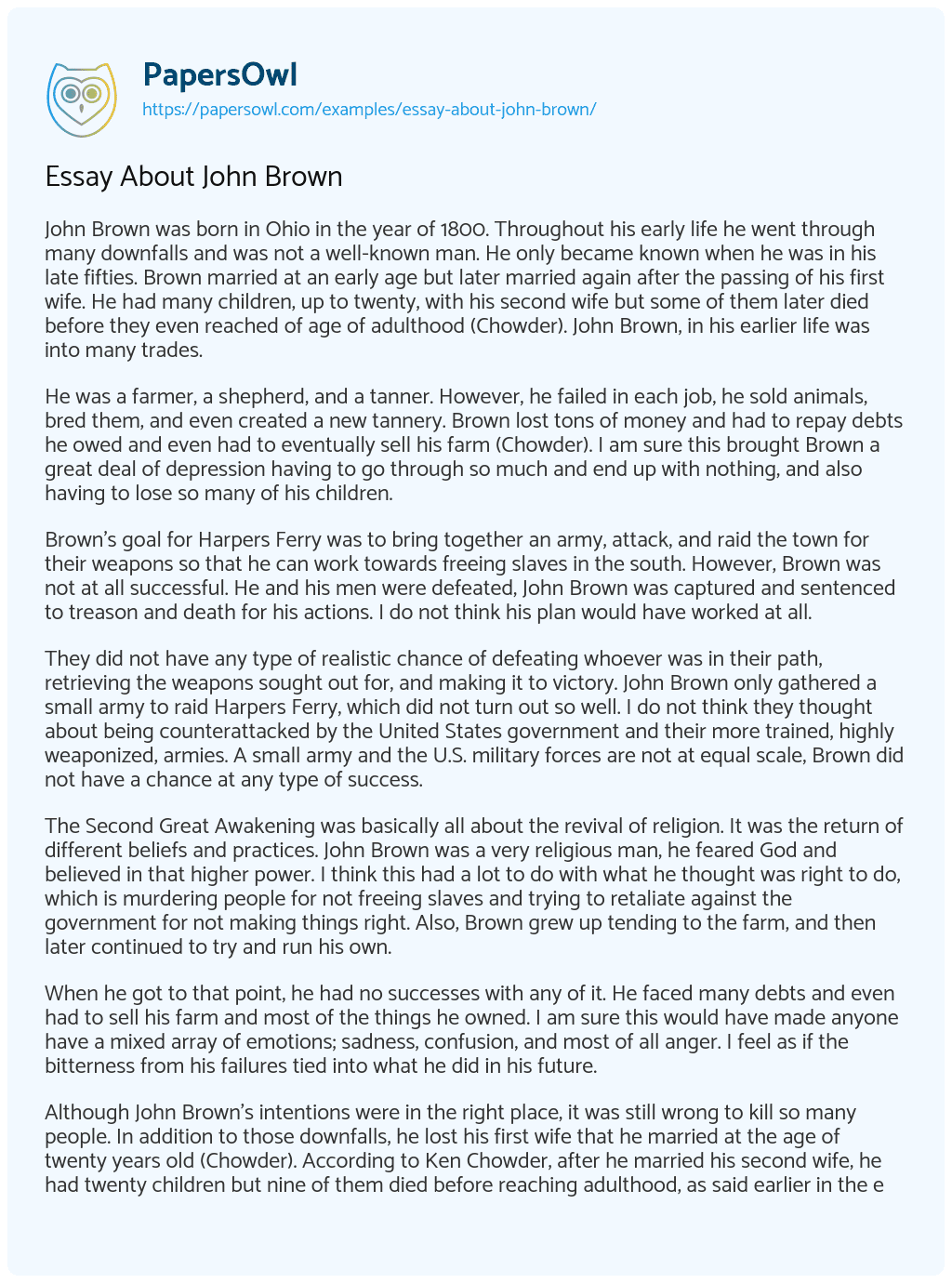 John Brown was born in Ohio in the year of 1800. Throughout his early life he went through many downfalls and was not a well-known man. He only became known when he was in his late fifties. Brown married at an early age but later married again after the passing of his first wife. He had many children, up to twenty, with his second wife but some of them later died before they even reached of age of adulthood (Chowder). John Brown, in his earlier life was into many trades.

He was a farmer, a shepherd, and a tanner. However, he failed in each job, he sold animals, bred them, and even created a new tannery. Brown lost tons of money and had to repay debts he owed and even had to eventually sell his farm (Chowder). I am sure this brought Brown a great deal of depression having to go through so much and end up with nothing, and also having to lose so many of his children.

Brown’s goal for Harpers Ferry was to bring together an army, attack, and raid the town for their weapons so that he can work towards freeing slaves in the south. However, Brown was not at all successful. He and his men were defeated, John Brown was captured and sentenced to treason and death for his actions. I do not think his plan would have worked at all.

They did not have any type of realistic chance of defeating whoever was in their path, retrieving the weapons sought out for, and making it to victory. John Brown only gathered a small army to raid Harpers Ferry, which did not turn out so well. I do not think they thought about being counterattacked by the United States government and their more trained, highly weaponized, armies. A small army and the U.S. military forces are not at equal scale, Brown did not have a chance at any type of success.

The Second Great Awakening was basically all about the revival of religion. It was the return of different beliefs and practices. John Brown was a very religious man, he feared God and believed in that higher power. I think this had a lot to do with what he thought was right to do, which is murdering people for not freeing slaves and trying to retaliate against the government for not making things right. Also, Brown grew up tending to the farm, and then later continued to try and run his own.

When he got to that point, he had no successes with any of it. He faced many debts and even had to sell his farm and most of the things he owned. I am sure this would have made anyone have a mixed array of emotions; sadness, confusion, and most of all anger. I feel as if the bitterness from his failures tied into what he did in his future.

Although John Brown’s intentions were in the right place, it was still wrong to kill so many people. In addition to those downfalls, he lost his first wife that he married at the age of twenty years old (Chowder). According to Ken Chowder, after he married his second wife, he had twenty children but nine of them died before reaching adulthood, as said earlier in the essay. I think this also adds onto the bitterness, the anger, and the wrath he set out onto the people he killed in cold blood Harriet Tubman was a strong and brave woman who escaped from being a slave and led other slaves to their freedom after.

She guided them through the underground railroads out of their slavery homes. She led so many into safe houses where they knew they could reside until they were able to escape to free lands. She was also known as the first African American woman to join the military. There she served as a nurse during the Civil War. Tubman was a fierce soldier, a warrior, and a woman who was dedicated to giving people better lives after their escape.

There are many similarities between Harriet Tubman and John Brown. They were both strong willed abolitionists and they both wanted freedom for slaves. However, there are many differences between these two abolitionists. John Brown was more of a violent man, to free slaves he killed anyone who got in his way. He led his men to the Pottawatomie Massacre. There he viciously took lives without remorse.

John Brown lived an eventful life, filled with many obstacles, commitment, and bloodshed. He was sentenced to death and later hung on December 2nd for the all of the murders and crimes he committed. However, it has been said that John Brown’s memory forever lived on even after his death. I think John Brown actually found some type of success in his life. Even though it cost him his life, he fought for what he believed in and influenced many to speak up for the change they wanted to see in the world. He helped others realize that slaves were humans and deserved to live equally as whites did. People remembered him for what he did, many thought of him as a “terrorist,” but others agreed with his motives, he was “noble and courageous” (Chowder).