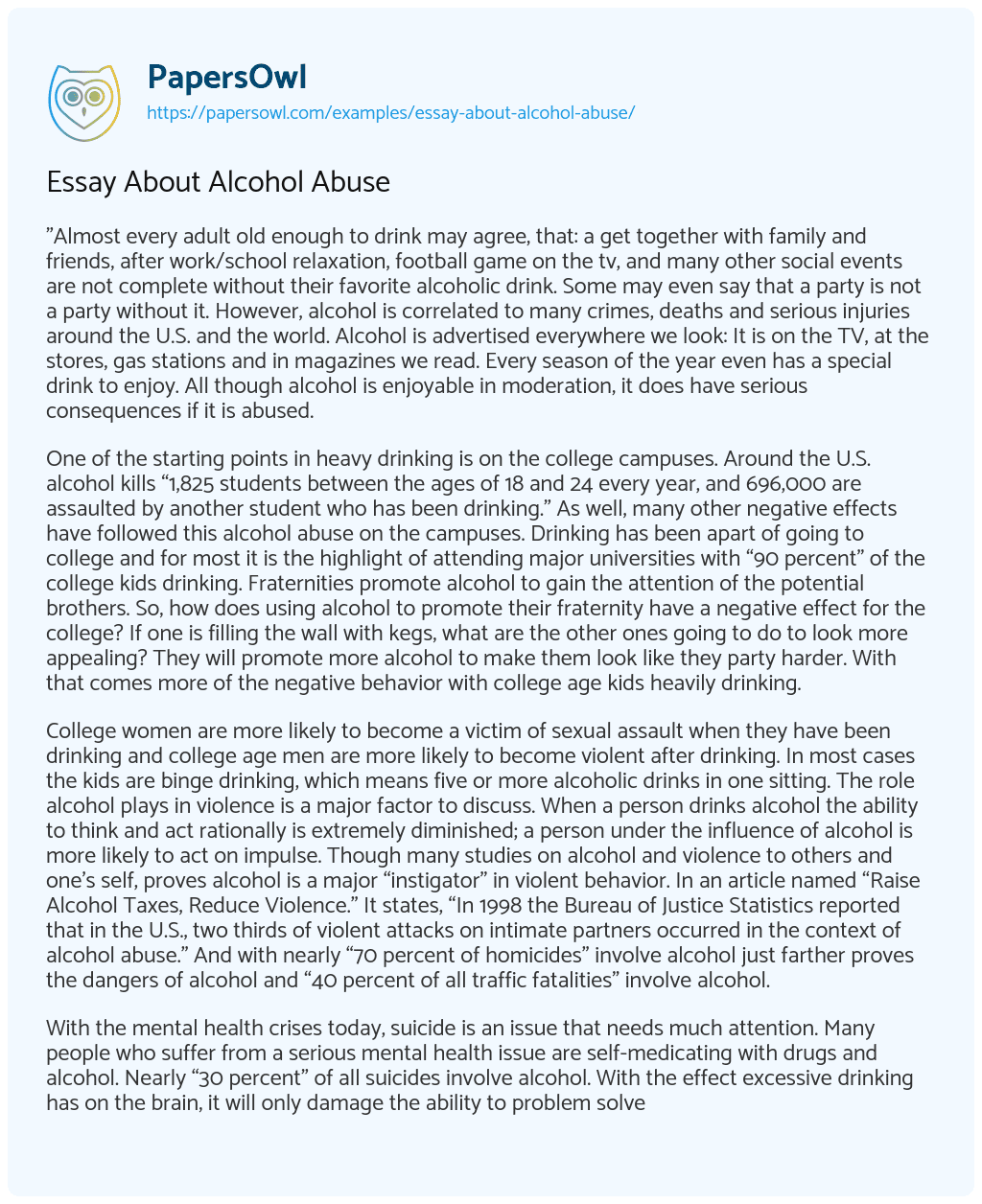 “Almost every adult old enough to drink may agree, that: a get together with family and friends, after work/school relaxation, football game on the tv, and many other social events are not complete without their favorite alcoholic drink. Some may even say that a party is not a party without it. However, alcohol is correlated to many crimes, deaths and serious injuries around the U.S. and the world. Alcohol is advertised everywhere we look: It is on the TV, at the stores, gas stations and in magazines we read. Every season of the year even has a special drink to enjoy. All though alcohol is enjoyable in moderation, it does have serious consequences if it is abused.

One of the starting points in heavy drinking is on the college campuses. Around the U.S. alcohol kills “1,825 students between the ages of 18 and 24 every year, and 696,000 are assaulted by another student who has been drinking.” As well, many other negative effects have followed this alcohol abuse on the campuses. Drinking has been apart of going to college and for most it is the highlight of attending major universities with “90 percent” of the college kids drinking. Fraternities promote alcohol to gain the attention of the potential brothers. So, how does using alcohol to promote their fraternity have a negative effect for the college? If one is filling the wall with kegs, what are the other ones going to do to look more appealing? They will promote more alcohol to make them look like they party harder. With that comes more of the negative behavior with college age kids heavily drinking.

College women are more likely to become a victim of sexual assault when they have been drinking and college age men are more likely to become violent after drinking. In most cases the kids are binge drinking, which means five or more alcoholic drinks in one sitting. The role alcohol plays in violence is a major factor to discuss. When a person drinks alcohol the ability to think and act rationally is extremely diminished; a person under the influence of alcohol is more likely to act on impulse. Though many studies on alcohol and violence to others and one’s self, proves alcohol is a major “instigator” in violent behavior. In an article named “Raise Alcohol Taxes, Reduce Violence.” It states, “In 1998 the Bureau of Justice Statistics reported that in the U.S., two thirds of violent attacks on intimate partners occurred in the context of alcohol abuse.” And with nearly “70 percent of homicides” involve alcohol just farther proves the dangers of alcohol and “40 percent of all traffic fatalities” involve alcohol.

With the mental health crises today, suicide is an issue that needs much attention. Many people who suffer from a serious mental health issue are self-medicating with drugs and alcohol. Nearly “30 percent” of all suicides involve alcohol. With the effect excessive drinking has on the brain, it will only damage the ability to problem solve. Alcohol is a depressant, so it will help with stress but not depression. Depression should always be treated by a professional not by self-medicating with alcohol. And to add on to the problems of homelessness, mental health and poverty, alcohol is promoted more in poorer neighborhoods that the wealthier. So, what does that mean? It means that the people with lower income are more likely to drink more and the people with mental health issues are more likely to self-medicate.

Alcoholism comes with many factors for the cause of the disease. Dysfunctional families and sociocultural play a major role in becoming and alcoholic, as well, so does psychological issues. The definition of alcoholism; “A primary chronic disease with genetic, psychological, social and environmental factors influencing its development and manifestation.” The possibility of a person becoming an alcoholic depends on those factors. The genetics plays a major role, knowing this will defiantly help prevent the disease. Signs of alcoholism include: “impaired control over drinking, pre-occupation with the drug, continued use despite negative consequences.” Knowing these signs could help a person in the early stages and may even save their life.

However, alcohol is not all bad news; drinking in moderation will improve one’s health. For example, “The high water content in beer and its diuretic effect may also help prevent the forming of kidney stones.” It can also lower the risk of heart disease. It is the alcohol abuse and addiction that is dangerous to society. the advertising for drinking is glorified today, therefore people do not drink in moderation on college campus, the game and at parties. It is not alcohol that needs to be band but the people who choose to use, need to drink in moderation.