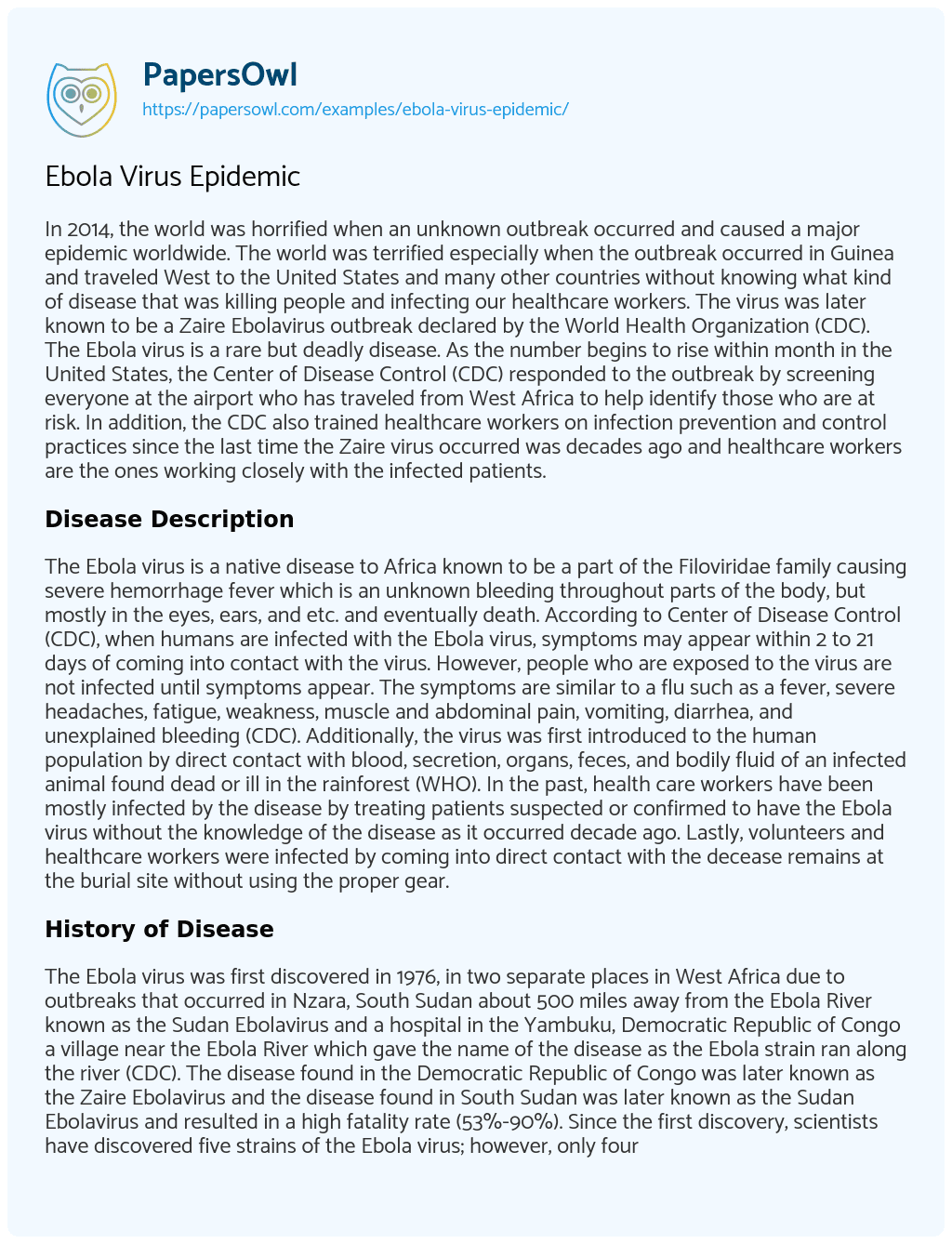 In 2014, the world was horrified when an unknown outbreak occurred and caused a major epidemic worldwide. The world was terrified especially when the outbreak occurred in Guinea and traveled West to the United States and many other countries without knowing what kind of disease that was killing people and infecting our healthcare workers. The virus was later known to be a Zaire Ebolavirus outbreak declared by the World Health Organization (CDC). The Ebola virus is a rare but deadly disease. As the number begins to rise within month in the United States, the Center of Disease Control (CDC) responded to the outbreak by screening everyone at the airport who has traveled from West Africa to help identify those who are at risk. In addition, the CDC also trained healthcare workers on infection prevention and control practices since the last time the Zaire virus occurred was decades ago and healthcare workers are the ones working closely with the infected patients.

The Ebola virus is a native disease to Africa known to be a part of the Filoviridae family causing severe hemorrhage fever which is an unknown bleeding throughout parts of the body, but mostly in the eyes, ears, and etc. and eventually death. According to Center of Disease Control (CDC), when humans are infected with the Ebola virus, symptoms may appear within 2 to 21 days of coming into contact with the virus. However, people who are exposed to the virus are not infected until symptoms appear. The symptoms are similar to a flu such as a fever, severe headaches, fatigue, weakness, muscle and abdominal pain, vomiting, diarrhea, and unexplained bleeding (CDC). Additionally, the virus was first introduced to the human population by direct contact with blood, secretion, organs, feces, and bodily fluid of an infected animal found dead or ill in the rainforest (WHO). In the past, health care workers have been mostly infected by the disease by treating patients suspected or confirmed to have the Ebola virus without the knowledge of the disease as it occurred decade ago. Lastly, volunteers and healthcare workers were infected by coming into direct contact with the decease remains at the burial site without using the proper gear.

The Ebola virus was first discovered in 1976, in two separate places in West Africa due to outbreaks that occurred in Nzara, South Sudan about 500 miles away from the Ebola River known as the Sudan Ebolavirus and a hospital in the Yambuku, Democratic Republic of Congo a village near the Ebola River which gave the name of the disease as the Ebola strain ran along the river (CDC). The disease found in the Democratic Republic of Congo was later known as the Zaire Ebolavirus and the disease found in South Sudan was later known as the Sudan Ebolavirus and resulted in a high fatality rate (53%-90%). Since the first discovery, scientists have discovered five strains of the Ebola virus; however, only four of the strains can transmit the disease to humans and one of the strains can only be found in animals. The four types of strains that are known to be found in human by direct contact from human to human transmission or animal to human transmission are: Zaire, Sudan, Tai Forest (Cote d’lvoire), and Bundibugyo. Lastly, the only type of strain not found in human, but can only found in animals from the host is Reston.

In 1994, the Cote d’Ivoire Ebolavirus was discovered in the Tai Forest, which involved the first single non-fatal case from a veterinarian, whom was performing an autopsy on the infected Chimpanzee (Towner, J. S., Sealy, T. K., Khristova, M. L., & et al., 2008). In addition, Bundibugyo Ebolavirus was later found in 2007. Bundibugyo is distantly related to Cote d’Ivoire resulting in 29 suspected and 56 confirmed cases with the lowest mortality rate. Leading Zaire, Sudan, and Bundibugyo to be the only three species to have the largest Ebola outbreaks in Africa ranging from 25% to 90% (Coltart, C. E. M., Lindsey, B., Ghinai, I., & et. al., 2017). Furthermore, it has been said that the African fruit bats are the reservoir host; and scientist have found these bats to carry antibodies and viral RNA fragments, but are unable to isolate the virus itself to see how the bats are able to host the virus (KupferschmidtJun, K., NormileJul, D., & et al., 2017).

Since the first Zaire Ebolavirus occurred in 1976, confirming 318 cases and 280 deaths, the CDC understood the disease and how to prevent it from spreading. The reason for the reemergence was reported on December 2013, when an 18-month-old boy from a small village in Guinea was believed to be infected by a fruit bat and five more cases occurred with symptoms of fatal diarrhea (CDC). It was not until March 13, 2014 when the Ministry of Health in Guinea reported an alert of an unknown illness killing people rapidly, fever, severe diarrhea, and vomiting, which was later identified through epidemiology investigation and blood sample by the Pasteur Institute in France that the unknown illness killing people rapidly was the Zaire Ebolavirus. On March 23, 2014, it was reported that there were 49 confirmed cases and 29 death (CDC). The Zaire Ebolavirus was poorly contained, allowing the virus to spread to nearby countries like Liberia and Sierra Leone due to a weak surveillance system and poor infrastructure of the public health where cases were slowly noticed and identified. Yet, some cases remain unreported. Hence, the reason to why the Ebola virus cases kept on reappearing. About two and a half year later, there have been 28,600 cases and 11,325 deaths (CDC). In Liberia, the Ebola virus took 8% of the doctors, nurses and midwives’ lives; however, about 30,000 children became orphans after the 2014- 2016 Ebola epidemic and about 20% of all the Ebola cases occurred in children ages 15 and under (CDC).

The 2014 2016 Ebola epidemic took a total of 28,652 suspected cases, 15,261 confirmed cases, and 11,325 deaths worldwide (CDC). The CDC responded to the outbreak after seeing how poorly the surveillance was handled by allowing the disease to spread quickly to nearby countries and worldwide before identifying the virus. In addition, with monitoring the rise in the number of cases confirmed was not completely accurate as there were still Ebola cases that were unreported and lost due to no free access to medical (Coltart, C. E. M., Lindsey, B., Ghinai, I., & et. al., 2017). As the cases in the United States occurred from people traveling to West Africa and becoming infected after arriving in the United States, the CDC started to conduct a screening at the airport of those traveling from West Africa as the first two cases occurred from patients traveling from West Africa. In addition, the CDC decided to train 55 hospital in 17 states in the United States to get the healthcare workers ready to treat and be on the lookout for any patients with signs or symptoms of the Ebola virus after the healthcare workers who were treating the infected patients were tested positive of have the Ebola virus incidents. Thus, one of the ways to prevent the spread of the Ebola virus is by avoiding going to infected areas of known outbreaks. By doing so, research the place you are traveling to and see if there have been any recent outbreaks before going. If there is an outbreak try to wash your hands frequently and avoid buying and eating wild animals or unknown meat. Also, try to avoid coming into contact with an infected person, by looking up the symptoms of the disease so you know what to notice. Lastly, do not handle any remains of an infected person without the proper personal equipment or allow an expert to handle the body of the decease (Mayo Clinic).

After the 2014 2016 Ebola virus epidemic, the world has a better knowledge and understanding on how to look and treat the disease that once occurred in 1976 that was caused by a nosocomial transmission. As better training was done to conduct a quicker response to the Ebola outbreak will allow future healthcare worker, identify and treat the virus in a timely manner where the disease do not spread to nearby countries within a short amount of time. The public is now aware of where and how the disease originated from and should educate themselves when traveling to the source where an outbreak occurs.