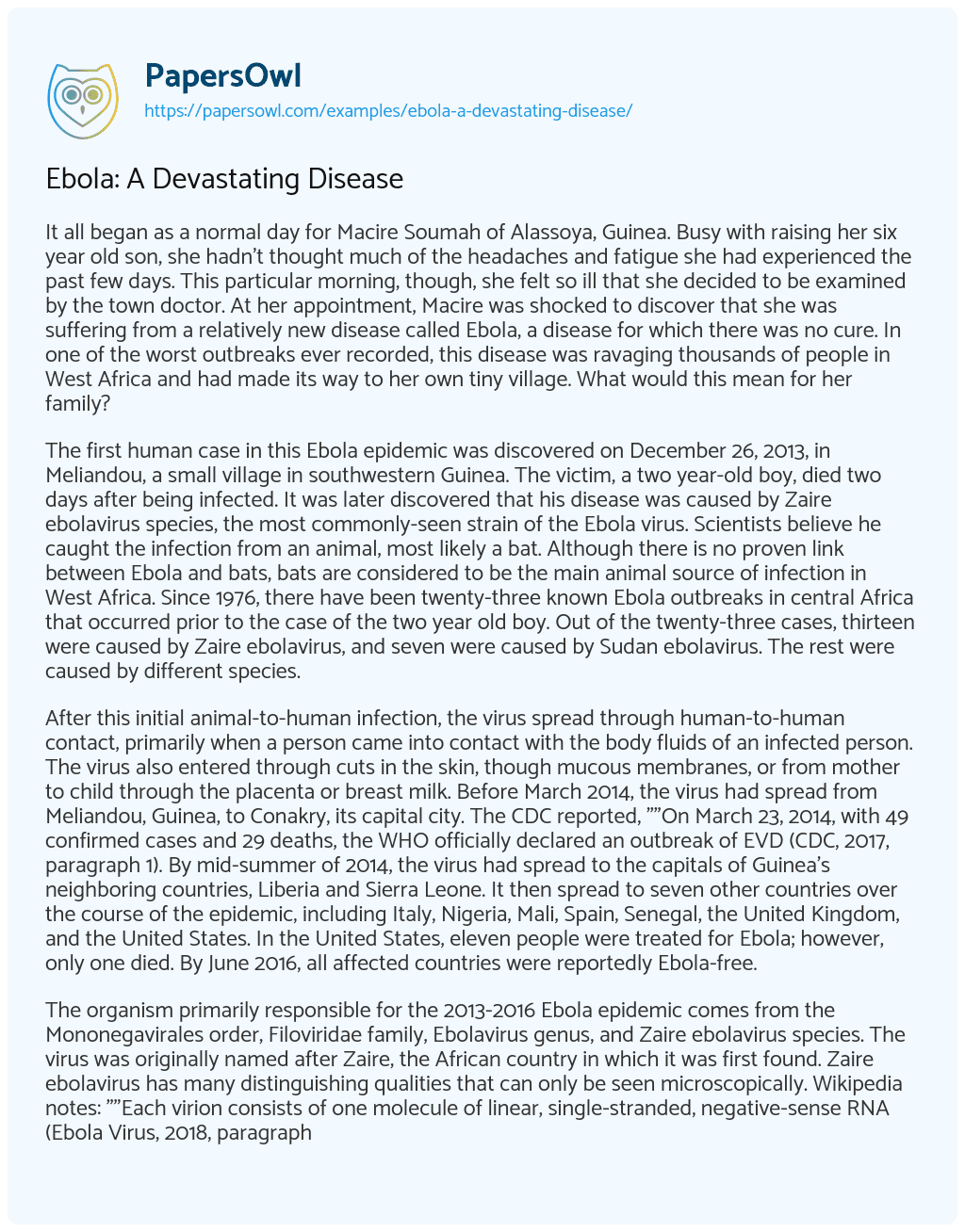 It all began as a normal day for Macire Soumah of Alassoya, Guinea. Busy with raising her six year old son, she hadn’t thought much of the headaches and fatigue she had experienced the past few days. This particular morning, though, she felt so ill that she decided to be examined by the town doctor. At her appointment, Macire was shocked to discover that she was suffering from a relatively new disease called Ebola, a disease for which there was no cure. In one of the worst outbreaks ever recorded, this disease was ravaging thousands of people in West Africa and had made its way to her own tiny village. What would this mean for her family?

The first human case in this Ebola epidemic was discovered on December 26, 2013, in Meliandou, a small village in southwestern Guinea. The victim, a two year-old boy, died two days after being infected. It was later discovered that his disease was caused by Zaire ebolavirus species, the most commonly-seen strain of the Ebola virus. Scientists believe he caught the infection from an animal, most likely a bat. Although there is no proven link between Ebola and bats, bats are considered to be the main animal source of infection in West Africa. Since 1976, there have been twenty-three known Ebola outbreaks in central Africa that occurred prior to the case of the two year old boy. Out of the twenty-three cases, thirteen were caused by Zaire ebolavirus, and seven were caused by Sudan ebolavirus. The rest were caused by different species.

After this initial animal-to-human infection, the virus spread through human-to-human contact, primarily when a person came into contact with the body fluids of an infected person. The virus also entered through cuts in the skin, though mucous membranes, or from mother to child through the placenta or breast milk. Before March 2014, the virus had spread from Meliandou, Guinea, to Conakry, its capital city. The CDC reported, “”On March 23, 2014, with 49 confirmed cases and 29 deaths, the WHO officially declared an outbreak of EVD (CDC, 2017, paragraph 1). By mid-summer of 2014, the virus had spread to the capitals of Guinea’s neighboring countries, Liberia and Sierra Leone. It then spread to seven other countries over the course of the epidemic, including Italy, Nigeria, Mali, Spain, Senegal, the United Kingdom, and the United States. In the United States, eleven people were treated for Ebola; however, only one died. By June 2016, all affected countries were reportedly Ebola-free.

The organism primarily responsible for the 2013-2016 Ebola epidemic comes from the Mononegavirales order, Filoviridae family, Ebolavirus genus, and Zaire ebolavirus species. The virus was originally named after Zaire, the African country in which it was first found. Zaire ebolavirus has many distinguishing qualities that can only be seen microscopically. Wikipedia notes: “”Each virion consists of one molecule of linear, single-stranded, negative-sense RNA (Ebola Virus, 2018, paragraph 7). Each virion is approximately 19,000 nucleotides long and consists of seven structural proteins: nucleoprotein,VP40, RNA-dependent RNA polymerase, polymerase cofactor, GP, VP24, and transcription activator (Ebola Virus, 2018, paragraph 3). Virions are tubular in shape, approximately 80 nm across, with a structure that is almost threadlike. The following picture of the Ebola virus was captured by Frederick A. Murphy of the CDC:

During this devastating epidemic, a total of over 28,616 cases were reported, with over 11,310 deaths. Out of these cases, only thirty-six cases and fifteen deaths occurred outside of Guinea, Liberia, and Sierra Leone. Common symptoms included elevated body temperature, bloody vomit, dysentery, abdominal pain, and internal bleeding. Out of those who were exposed, healthcare workers were at the highest risk for catching the virus. According to the CDC, “”During the epidemic, Liberia lost 8% of its doctors, nurses, and midwives to EVD (CDC, 2017, paragraph 15). Most of those who contracted the disease were adults. However, the epidemic affected many children as well. The CDC noted, “”Nearly 20% of all EVD cases occurred in children under 15 years of age, and an estimated 30,000 children became orphans during this epidemic (CDC, 2017, paragraph 16).

Currently, there is no known cure for the Ebola virus. However, a vaccine is in the works and is awaiting approval for use in humans. This vaccine, known as VSV-EBOV, was found to be 70-100% effective at killing the virus, making it the first vaccine to prove effective against the disease (Ebola Virus, 2018, paragraph 18). Although the vaccine is not yet approved for human use, it has shown promising results in nonhuman primates, primarily in macaque monkeys. For now, until vaccinations are approved, symptoms can be managed through supportive care, oxygen therapy, and IV fluids/electrolytes.

Ebola spread quickly for many reasons. Failure to contain the virus and interrupt its transmission were huge factors in its spread. After becoming infected, many people made the impulsive decision to cross national borders, thus spreading the disease to neighboring areas. Other contributing factors included the use of unsterilized needles, close personal contact with the diseased, and weak surveillance by public health agencies (CDC, 2017, paragraph 2). The spread of Ebola in crowded areas, along with West Africans’ lack of knowledge of infection control methods, contributed as well. Although the disease mostly affected Guinea, Liberia, and Sierra Leone, the infection gradually managed to migrate to the UK and US. Thankfully, the spread of Ebola was eventually brought under control before it could travel any further.

One of the most important takeaways from this epidemic is how to prevent future outbreaks. According to the WHO Ebola Response Team, managing future outbreaks revolves around “”community engagement, early case detection and diagnosis, comprehensive contact tracing, prompt patient isolation, supportive clinical care, and rigorous infection control, including safe burial (WHO, 2016, paragraph 25). There is no telling where or when the Ebola virus will strike next. Although Ebola is currently under control in West Africa, new cases may still emerge. However, according to the CDC, “”because of ongoing surveillance and strengthened response capabilities, the affected countries now have the experience and tools to rapidly identify cases and limit the spread of the disease (CDC, 2017, paragraph 18). Travelers to West Africa should take standard precautions, such as staying away from the sick, avoiding body fluids, and never coming into contact with dead bodies.

Along with taking contact precautions, African citizens should always be prepared for another outbreak and learn methods of prevention. In addition, survivor support services should be available at all times. As a major step in preparedness, people in countries susceptible to Ebola should have financial stability in order to receive adequate health care services. This important aspect should be Africans’ first line of defense (WHO, 2016, paragraph 26). If these methods of infection control and citizen preparedness are met, there will hopefully never be another Ebola epidemic.

Thankfully, Macire Soumah recovered from her illness and is now an Ebola survivor. She received vigorous treatment in an Ebola treatment center and was finally released twenty-five days later (WHO, 2015, paragraph 1). Because of the responsiveness and knowledge of Macire’s health care team, Macire was able to fully recover from the virus that claimed so many lives. Today, Macire is an outspoken advocate for Ebola education and prevention. She has dedicated her life to giving those in her community a message of hope and survival while also carefully monitoring for signs of infection. Surely, encouraging stories like Macire’s have shown that the human spirit can prove victorious, even over a devastating disease like Ebola.