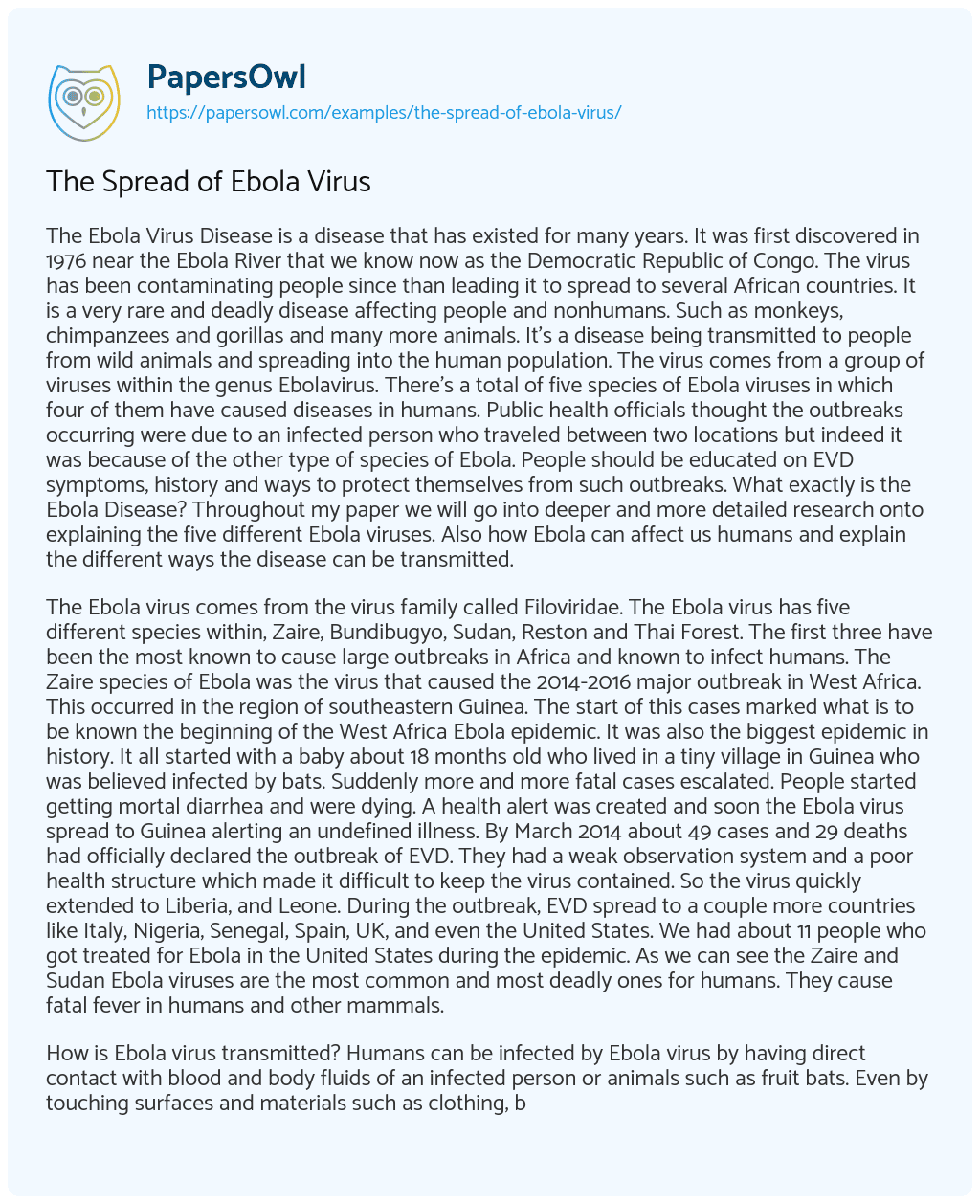 The Ebola Virus Disease is a disease that has existed for many years. It was first discovered in 1976 near the Ebola River that we know now as the Democratic Republic of Congo. The virus has been contaminating people since than leading it to spread to several African countries. It is a very rare and deadly disease affecting people and nonhumans. Such as monkeys, chimpanzees and gorillas and many more animals. It’s a disease being transmitted to people from wild animals and spreading into the human population. The virus comes from a group of viruses within the genus Ebolavirus. There’s a total of five species of Ebola viruses in which four of them have caused diseases in humans. Public health officials thought the outbreaks occurring were due to an infected person who traveled between two locations but indeed it was because of the other type of species of Ebola. People should be educated on EVD symptoms, history and ways to protect themselves from such outbreaks. What exactly is the Ebola Disease? Throughout my paper we will go into deeper and more detailed research onto explaining the five different Ebola viruses. Also how Ebola can affect us humans and explain the different ways the disease can be transmitted.

The Ebola virus comes from the virus family called Filoviridae. The Ebola virus has five different species within, Zaire, Bundibugyo, Sudan, Reston and Thai Forest. The first three have been the most known to cause large outbreaks in Africa and known to infect humans. The Zaire species of Ebola was the virus that caused the 2014-2016 major outbreak in West Africa. This occurred in the region of southeastern Guinea. The start of this cases marked what is to be known the beginning of the West Africa Ebola epidemic. It was also the biggest epidemic in history. It all started with a baby about 18 months old who lived in a tiny village in Guinea who was believed infected by bats. Suddenly more and more fatal cases escalated. People started getting mortal diarrhea and were dying. A health alert was created and soon the Ebola virus spread to Guinea alerting an undefined illness. By March 2014 about 49 cases and 29 deaths had officially declared the outbreak of EVD. They had a weak observation system and a poor health structure which made it difficult to keep the virus contained. So the virus quickly extended to Liberia, and Leone. During the outbreak, EVD spread to a couple more countries like Italy, Nigeria, Senegal, Spain, UK, and even the United States. We had about 11 people who got treated for Ebola in the United States during the epidemic. As we can see the Zaire and Sudan Ebola viruses are the most common and most deadly ones for humans. They cause fatal fever in humans and other mammals.

How is Ebola virus transmitted? Humans can be infected by Ebola virus by having direct contact with blood and body fluids of an infected person or animals such as fruit bats. Even by touching surfaces and materials such as clothing, bed sheets or anything that has or that is contaminated with any type of fluids from the infected person can also be a way ebolavirus spreads from human to human. Even deceased humans who had the virus played a big role in the spread of Ebola. The people who have died due to this virus still remain contagious. Safe burial practices are very important in order to avoid such outbreaks. Basically having direct contact with a person or mammal that tested positive with the Ebola Virus could easily be transmitted. During that major outbreak back in 2014 even health care workers were being infected while treating and trying to help the contaminated patients. People remained infectious as long as they still had the virus in their blood. To protect healthcare workers and other patients in facilities that were positive for the ebolavirus had to wear personal protective equipment to protect themselves from being contaminated as well. Rigorously measures had to take place to avoid the epidemic from spreading around the world. The virus itself killed more than 4,000 people in West Africa which spread thousands of kilometers from where it started.

The risk of getting Ebola was only if you traveled to Africa and visited areas where Ebola virus outbreaks have occurred. Another one can be if you were doing an animal research with monkeys or other imported mammals from Africa. Many got infected by providing health care or personal care for sick relatives. Like mentioned earlier medical personnel had to wear protective gear, such as masks and gloves in order to avoid getting infected.

The viral illness was characterized by a sudden fever, weakness, muscle pain, sore throat and headache. Following by vomiting, diarrhea, rash, kidney and liver malfunction. Even in some cases it causes internal and external bleeding. This virus was a deadly one because it interfere with the immune system making it weak. Many were known to die from multiple organ failures and dehydration form severe vomiting and diarrhea. As the illness progressed it caused seizures, coma, delirium, and shock. Some survived the virus and others did not. But for the ones that survived the recovery was very slow. It can take months for people to recover from such fatal virus.

The Spread of Ebola Virus. (2019, Nov 07). Retrieved from https://papersowl.com/examples/the-spread-of-ebola-virus/