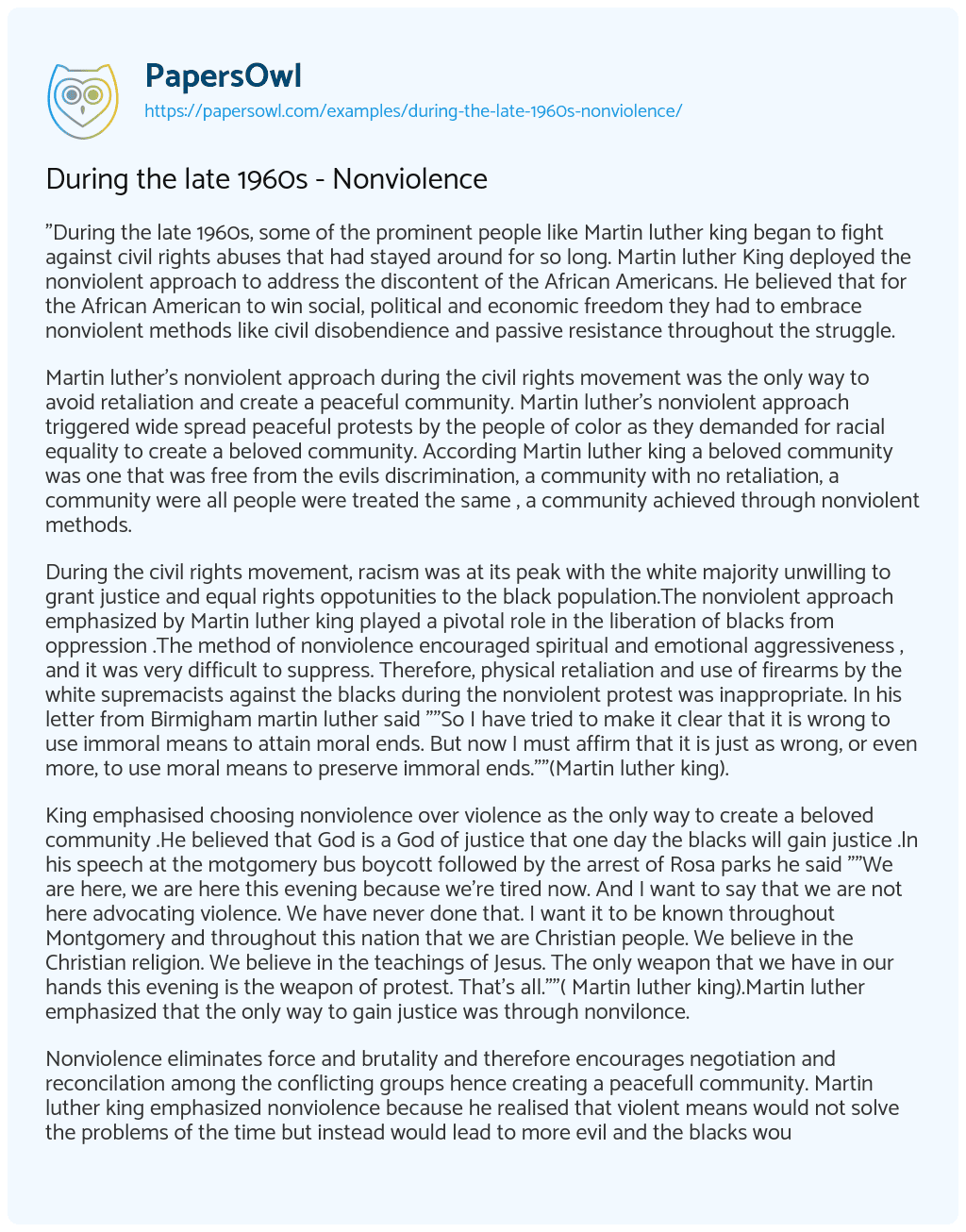 “During the late 1960s, some of the prominent people like Martin luther king began to fight against civil rights abuses that had stayed around for so long. Martin luther King deployed the nonviolent approach to address the discontent of the African Americans. He believed that for the African American to win social, political and economic freedom they had to embrace nonviolent methods like civil disobendience and passive resistance throughout the struggle.

During the civil rights movement, racism was at its peak with the white majority unwilling to grant justice and equal rights oppotunities to the black population.The nonviolent approach emphasized by Martin luther king played a pivotal role in the liberation of blacks from oppression .The method of nonviolence encouraged spiritual and emotional aggressiveness , and it was very difficult to suppress. Therefore, physical retaliation and use of firearms by the white supremacists against the blacks during the nonviolent protest was inappropriate. In his letter from Birmigham martin luther said “”So I have tried to make it clear that it is wrong to use immoral means to attain moral ends. But now I must affirm that it is just as wrong, or even more, to use moral means to preserve immoral ends.””(Martin luther king).

King emphasised choosing nonviolence over violence as the only way to create a beloved community .He believed that God is a God of justice that one day the blacks will gain justice .ln his speech at the motgomery bus boycott followed by the arrest of Rosa parks he said “”We are here, we are here this evening because we’re tired now. And I want to say that we are not here advocating violence. We have never done that. I want it to be known throughout Montgomery and throughout this nation that we are Christian people. We believe in the Christian religion. We believe in the teachings of Jesus. The only weapon that we have in our hands this evening is the weapon of protest. That’s all.””( Martin luther king).Martin luther emphasized that the only way to gain justice was through nonvilonce.

Nonviolence eliminates force and brutality and therefore encourages negotiation and reconcilation among the conflicting groups hence creating a peacefull community. Martin luther king emphasized nonviolence because he realised that violent means would not solve the problems of the time but instead would lead to more evil and the blacks would not manage to defeat the well armed white majority. This was a deliberate move to save the lives of many African Americans who would have died trying to violently attack the armed white majority. Inorder to create a beloved community all conflicts should be solved with negotiation and reconcilation. Martin luther encouraged the blacks to create friendship with their opponents as the only way to create a beloved community.

Martin luther was a staunch christian who believed in love rather than hatred. He encouraged the blacks to love their enemies as they love themselves because we were all created by one God. He believed that it was totally wrong for the worthy to discriminate the unworthy. Martin luther believed in loving one another. In his speech I have a dream he said, “”I have a dream that one day on the red hills of Georgia, the sons of former slaves and the sons of former slave owners will be able to sit down together at the table of brotherhood””(Martin luther king). Martin luther believed that working and living together was the only way to create a beloved community. Nonviolence was the only way to avoid retaliation and create a peacefull communty.