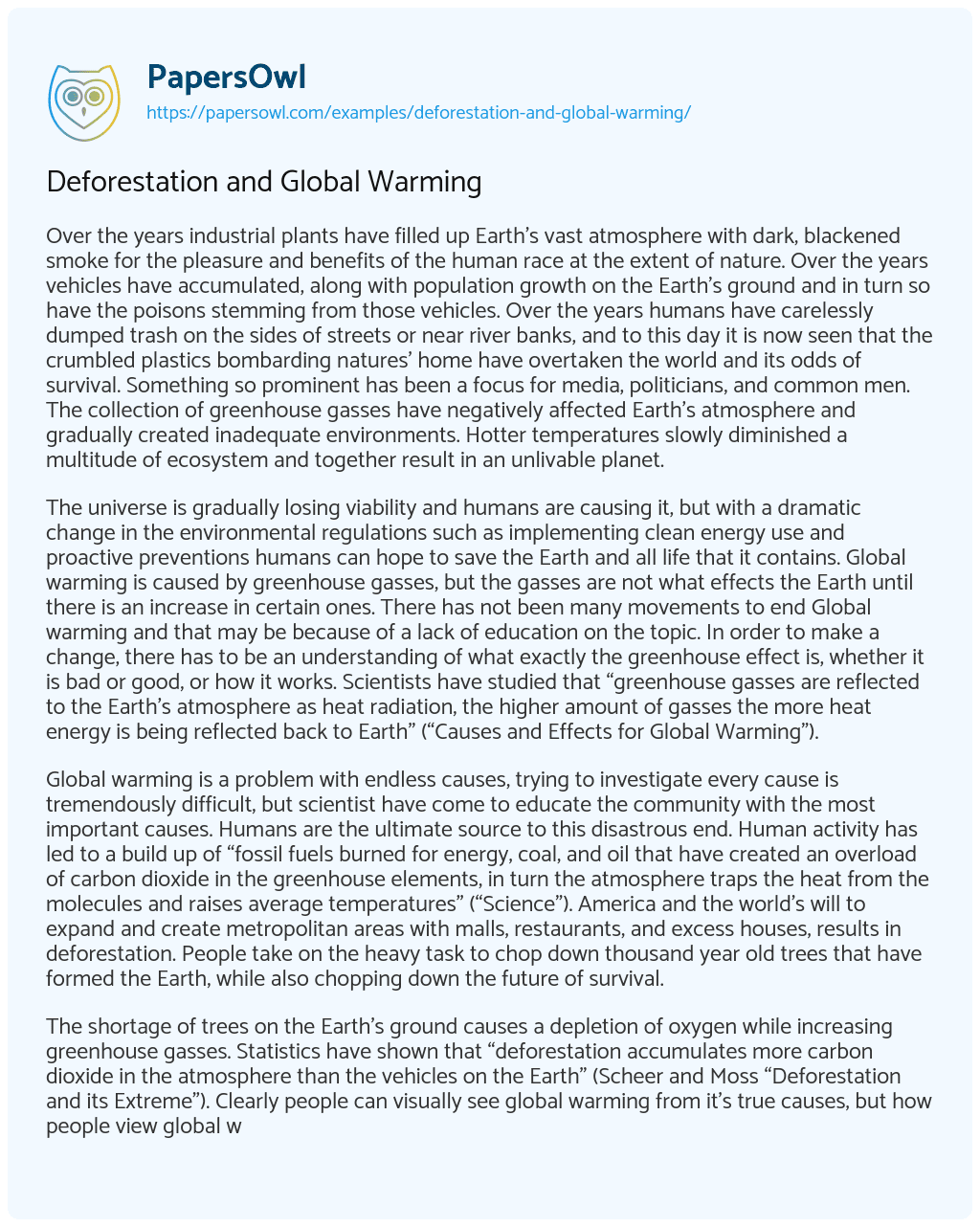 Over the years industrial plants have filled up Earth’s vast atmosphere with dark, blackened smoke for the pleasure and benefits of the human race at the extent of nature. Over the years vehicles have accumulated, along with population growth on the Earth’s ground and in turn so have the poisons stemming from those vehicles. Over the years humans have carelessly dumped trash on the sides of streets or near river banks, and to this day it is now seen that the crumbled plastics bombarding natures’ home have overtaken the world and its odds of survival. Something so prominent has been a focus for media, politicians, and common men. The collection of greenhouse gasses have negatively affected Earth’s atmosphere and gradually created inadequate environments. Hotter temperatures slowly diminished a multitude of ecosystem and together result in an unlivable planet.

The universe is gradually losing viability and humans are causing it, but with a dramatic change in the environmental regulations such as implementing clean energy use and proactive preventions humans can hope to save the Earth and all life that it contains. Global warming is caused by greenhouse gasses, but the gasses are not what effects the Earth until there is an increase in certain ones. There has not been many movements to end Global warming and that may be because of a lack of education on the topic. In order to make a change, there has to be an understanding of what exactly the greenhouse effect is, whether it is bad or good, or how it works. Scientists have studied that “greenhouse gasses are reflected to the Earth’s atmosphere as heat radiation, the higher amount of gasses the more heat energy is being reflected back to Earth” (“Causes and Effects for Global Warming”).

Global warming is a problem with endless causes, trying to investigate every cause is tremendously difficult, but scientist have come to educate the community with the most important causes. Humans are the ultimate source to this disastrous end. Human activity has led to a build up of “fossil fuels burned for energy, coal, and oil that have created an overload of carbon dioxide in the greenhouse elements, in turn the atmosphere traps the heat from the molecules and raises average temperatures” (“Science”). America and the world’s will to expand and create metropolitan areas with malls, restaurants, and excess houses, results in deforestation. People take on the heavy task to chop down thousand year old trees that have formed the Earth, while also chopping down the future of survival.

The shortage of trees on the Earth’s ground causes a depletion of oxygen while increasing greenhouse gasses. Statistics have shown that “deforestation accumulates more carbon dioxide in the atmosphere than the vehicles on the Earth” (Scheer and Moss “Deforestation and its Extreme”). Clearly people can visually see global warming from it’s true causes, but how people view global warming varies in opinions. Media and politics are a big role in what side opinions fall on. While politicians take sides, media contributes in exploiting politicians opinion to stir society’s beliefs. It was recorded by BBC News that “while viewing the Republicans opinion, it is seen that there is little to no trust in scientist studies of climates and future trajectory. On another hand Democrats are considerably more trustful in the scientist works” (Funk and Kennedy “The Politics of Climate”).

There are increasing numbers of people who do not believe in global warming and its effects, but luckily some still do. It is not good to have a decline in people willing to prevent global warming, especially in politics. Politicians start the chain of implementing new rules and regulations if they think it is important to. If there is an increase of politicians that believe global warming is a true problem for the world it will allow more opportunities to implement change. As greenhouse gasses numbers expand, “Trump removed America from the Paris Climate Change Agreement which committed 187 other countries to keeping rising temperatures below two degrees celsius” (“Trump on Climate Change”). Being removed from a worldwide organization that mainly focuses on preventing increasing temperatures seems unlawfully wrong. Trump’s presidency should not push the world further away from preventing global warming. With some Americans concerned with Trump’s diplomatic decisions, Trump clears that he actually does consider global warming a true problem.

News BBC disclosed that “Trump’s plans after removing the U.S. from the Paris Climate Change Agreement are to begin a new more fair deal to help prevent increases in temperatures that would also be fair to American businesses and workers” (“Trump on Climate Change”). Politics and media create a social stream for everyone to be connected and with that media gives an easier and accessible way to spread the word of prevention for global warming. Global warming has become noticeable by the seasons. Each summer becomes hotter than the previous one. Winters are becoming suddenly warmer than usual. It has been studied that “higher temperatures are more prevalent and increasing while lower temperature are not” (Callery “Global Climate Change”). Having the season’s average temperatures increasing is dangerous because plants, animals, and all of nature have come to evolve and depend on certain seasons to grow and thrive.

As the seasons change so does seventy-one percent of the Earth’s surface. Oceans bring life to this world containing millions of animals and thousands of different species and without them life could not survive. Trees have decreased as “industrial factories have taken over every square inch of this world since the eighteenth century and in turn the oceans acidity has expanded by thirty percent. Since industrial factories give off high carbon dioxide in the atmosphere it is further studied that oceans are more likely to absorb the carbon dioxide becoming more acidic” (Callery “Global Climate Change”). The results of global warming are harsh and have continued to turn the world out of place. Global warming has consequences for the Earth, but it also causes health risk for people. Changing temperatures and excess gasses pushing into the atmosphere can cause humans to experience some health problems. The health problems humans are at risk for stem from the “change in distribution, migration, and behavior of mosquitoes, ticks, and rodents. The rodents and insects carry diseases such as west nile virus or lyme disease that is easily passed onto humans” (Balbus “Climate Change and Human Health”).

With climate change comes environmental change, creating chaos and possibly new diseases. While fighting off new diseases humans also fight for equal rights, equal pay, discrimination, and more, they strive and defeat the odds against them. It has been claimed by “the Fourth National Climate Assessment that global warming could be counteracted if society works to reduce greenhouse gasses” (“Trump on Climate Change”). Overall it can be concluded that there is hope for a future if humans would put more energy into defeating global warming. To create a change it does not take much. If a hundred people help in one way then there has already been one hundred contributions to ending global warming. If society “simply uses less hot water, washes clothes in cold water, moves thermostat down just two degrees in winter and up two degrees in summer, replaces one regular light bulb with one fluorescent light bulb, recycles just half a household of waste, walk, or bike, will all together save about three thousand pounds of carbon dioxide” (“10 ways to stop”).

There’s a multitude of ways to make a change that are very accessible. There are also more obvious interventions such as, industrial factories coming out of use, ending deforestation or slowing it down, and preventing the development of vehicles that emit poisons out. As mentioned before deforestation should be prevented to stop accumulating carbon dioxide, but with the prevention of deforestation society could also plant trees. It has been recorded that “a single tree absorbs over a ton of carbon dioxide over its lifetime” (“10 ways to stop”).

Simple or major changes in society are possible and there are numerous options to start with. Global warming is the collection of greenhouse gasses that gradually fill environments with toxins and destroy nature, but with big strides humans can hope to reclaim Earth. There are a mass number of causes, effects, and preventions because global warming is an issue that can’t be fixed by one person or one law passed, it is only fixed if millions upon billions of people are involved in changing it. Global warming is only fixed if there is an increase in rules and regulations on deforestation, industrial factories, and if pollution dramatically decreases.

The planet Earth is the only planet in the universe that can contain life and society should not let our mistakes degrade what is left of it. The future is not misleading, society will know exactly how Earth will purvey in years to come because of the actions they take now. Let not the world go down by human’s own hand, rather gather the hands of million upon billions of people of today and assemble a world without poisons amongst them.