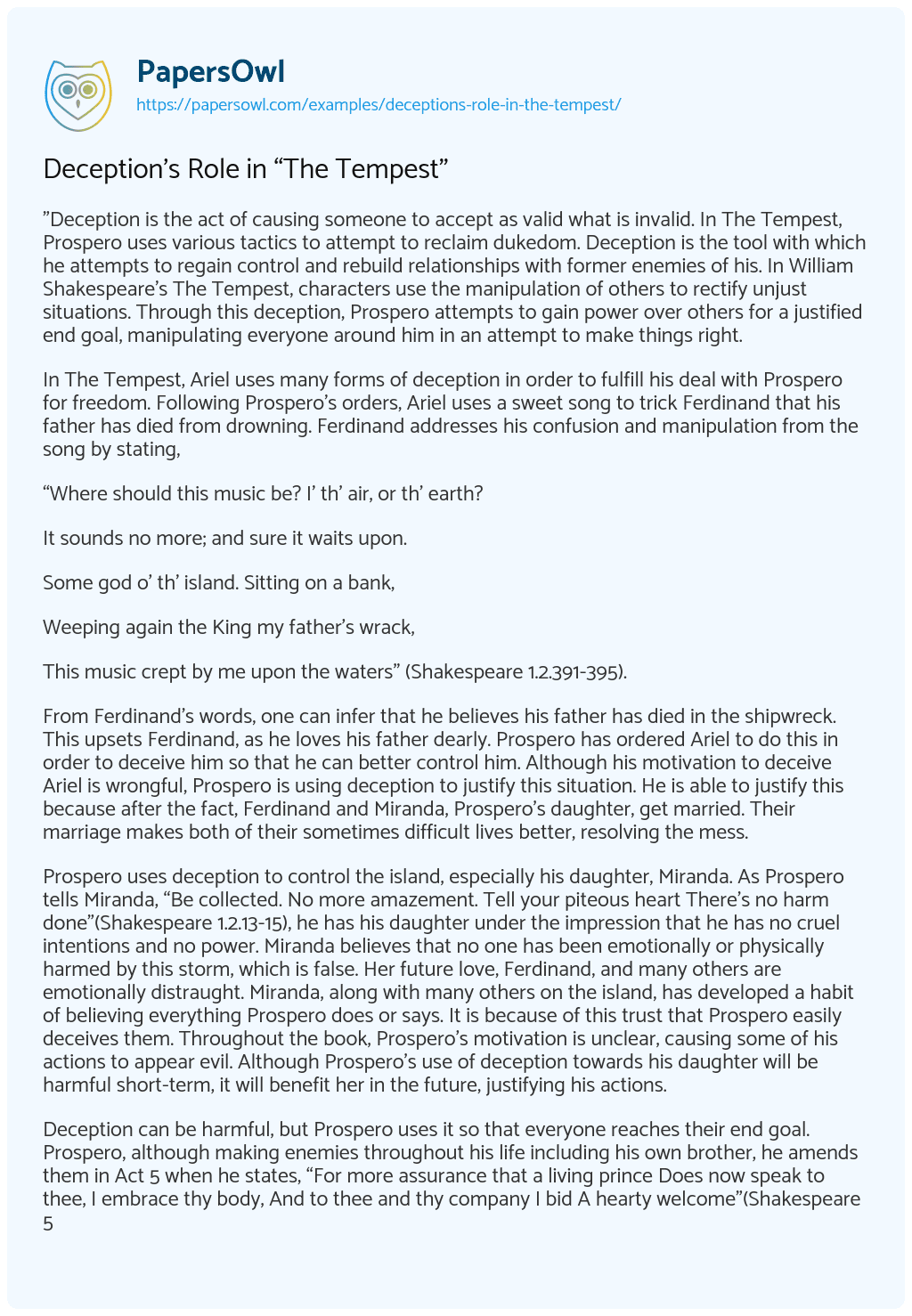 “Deception is the act of causing someone to accept as valid what is invalid. In The Tempest, Prospero uses various tactics to attempt to reclaim dukedom. Deception is the tool with which he attempts to regain control and rebuild relationships with former enemies of his. In William Shakespeare’s The Tempest, characters use the manipulation of others to rectify unjust situations. Through this deception, Prospero attempts to gain power over others for a justified end goal, manipulating everyone around him in an attempt to make things right.

In The Tempest, Ariel uses many forms of deception in order to fulfill his deal with Prospero for freedom. Following Prospero’s orders, Ariel uses a sweet song to trick Ferdinand that his father has died from drowning. Ferdinand addresses his confusion and manipulation from the song by stating,

It sounds no more; and sure it waits upon.

Some god o’ th’ island. Sitting on a bank,

From Ferdinand’s words, one can infer that he believes his father has died in the shipwreck. This upsets Ferdinand, as he loves his father dearly. Prospero has ordered Ariel to do this in order to deceive him so that he can better control him. Although his motivation to deceive Ariel is wrongful, Prospero is using deception to justify this situation. He is able to justify this because after the fact, Ferdinand and Miranda, Prospero’s daughter, get married. Their marriage makes both of their sometimes difficult lives better, resolving the mess.

Prospero uses deception to control the island, especially his daughter, Miranda. As Prospero tells Miranda, “Be collected. No more amazement. Tell your piteous heart There’s no harm done”(Shakespeare 1.2.13-15), he has his daughter under the impression that he has no cruel intentions and no power. Miranda believes that no one has been emotionally or physically harmed by this storm, which is false. Her future love, Ferdinand, and many others are emotionally distraught. Miranda, along with many others on the island, has developed a habit of believing everything Prospero does or says. It is because of this trust that Prospero easily deceives them. Throughout the book, Prospero’s motivation is unclear, causing some of his actions to appear evil. Although Prospero’s use of deception towards his daughter will be harmful short-term, it will benefit her in the future, justifying his actions.

Deception can be harmful, but Prospero uses it so that everyone reaches their end goal. Prospero, although making enemies throughout his life including his own brother, he amends them in Act 5 when he states, “For more assurance that a living prince Does now speak to thee, I embrace thy body, And to thee and thy company I bid A hearty welcome”(Shakespeare 5.1.109-112). Prospero and Alonso are making amends despite having strong disagreements in the past. Although Alonso originally wanted Prospero dead, he regretted his desire. When he realized Prospero was alive, he forgave all that Prospero had done to manipulate him. After the fact, Prospero and Alonso embraced in love. Even though Prospero may have deceived his brother throughout the book, he amends his relationship with him in the end. This proves that Prospero’s intentions truly were wholesome, and he aimed to please.

The unjust situations in William Shakespeare’s The Tempest are amended, showing deception‘s positive use. Deception is prevalent in modern day from companies such as Facebook using customer’s information for profit without customer permission. Unlike Facebook, Prospero and other characters in The Tempest may have appeared to have bad intentions, but in the end, all they wanted was peace for the island. One can connect it to their own life from arguments they have had with their immediate family, and know they would do whatever it takes to fix it. Finally, deception is a cruel yet amazing tool used by William Shakespeare to better depict the themes in The Tempest.”

Deception’s Role in “The Tempest”. (2021, Jun 17). Retrieved from https://papersowl.com/examples/deceptions-role-in-the-tempest/