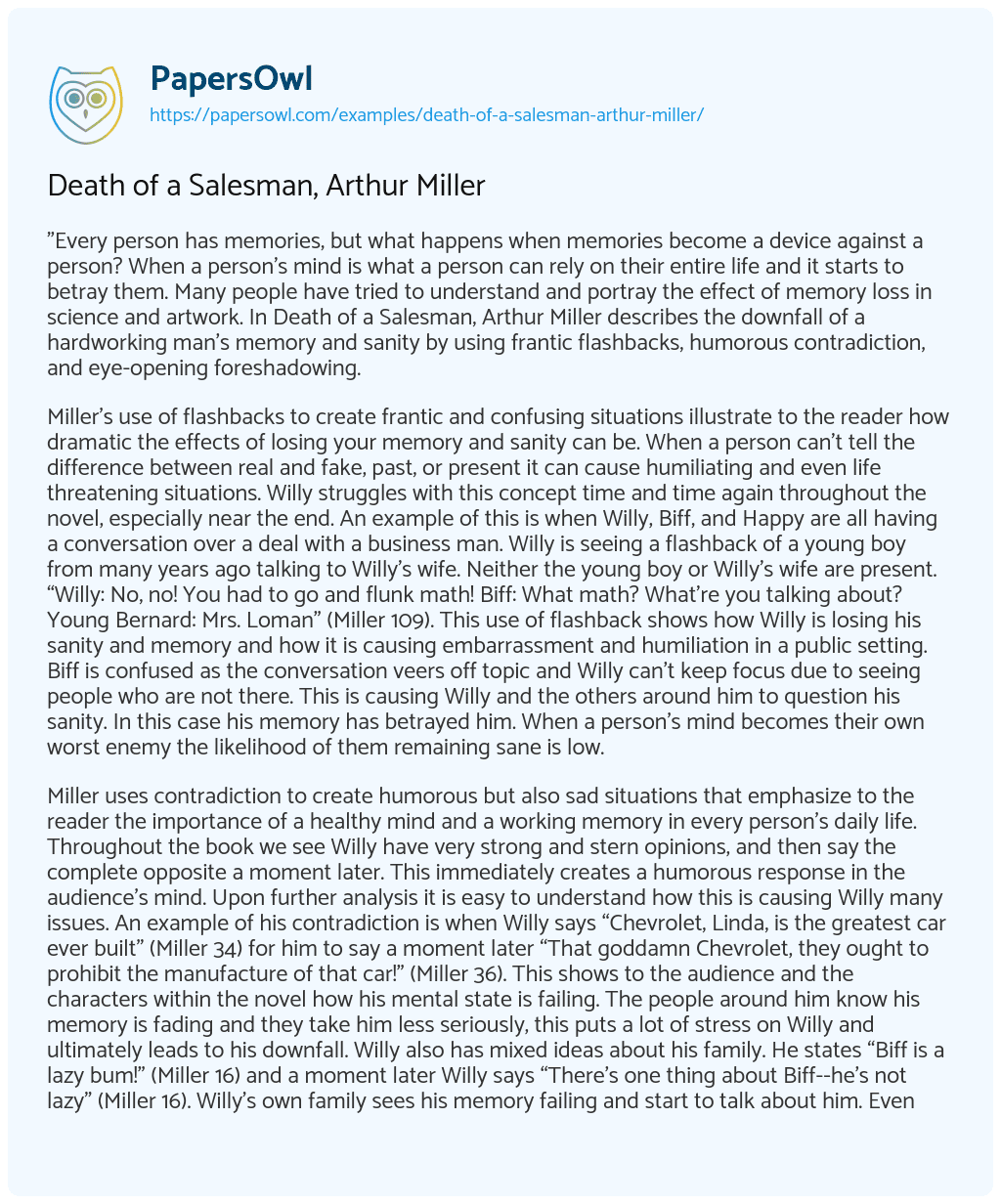 “Every person has memories, but what happens when memories become a device against a person? When a person’s mind is what a person can rely on their entire life and it starts to betray them. Many people have tried to understand and portray the effect of memory loss in science and artwork. In Death of a Salesman, Arthur Miller describes the downfall of a hardworking man’s memory and sanity by using frantic flashbacks, humorous contradiction, and eye-opening foreshadowing.

Miller’s use of flashbacks to create frantic and confusing situations illustrate to the reader how dramatic the effects of losing your memory and sanity can be. When a person can’t tell the difference between real and fake, past, or present it can cause humiliating and even life threatening situations. Willy struggles with this concept time and time again throughout the novel, especially near the end. An example of this is when Willy, Biff, and Happy are all having a conversation over a deal with a business man. Willy is seeing a flashback of a young boy from many years ago talking to Willy’s wife. Neither the young boy or Willy’s wife are present. “Willy: No, no! You had to go and flunk math! Biff: What math? What’re you talking about? Young Bernard: Mrs. Loman” (Miller 109). This use of flashback shows how Willy is losing his sanity and memory and how it is causing embarrassment and humiliation in a public setting. Biff is confused as the conversation veers off topic and Willy can’t keep focus due to seeing people who are not there. This is causing Willy and the others around him to question his sanity. In this case his memory has betrayed him. When a person’s mind becomes their own worst enemy the likelihood of them remaining sane is low.

Miller uses contradiction to create humorous but also sad situations that emphasize to the reader the importance of a healthy mind and a working memory in every person’s daily life. Throughout the book we see Willy have very strong and stern opinions, and then say the complete opposite a moment later. This immediately creates a humorous response in the audience’s mind. Upon further analysis it is easy to understand how this is causing Willy many issues. An example of his contradiction is when Willy says “Chevrolet, Linda, is the greatest car ever built” (Miller 34) for him to say a moment later “That goddamn Chevrolet, they ought to prohibit the manufacture of that car!” (Miller 36). This shows to the audience and the characters within the novel how his mental state is failing. The people around him know his memory is fading and they take him less seriously, this puts a lot of stress on Willy and ultimately leads to his downfall. Willy also has mixed ideas about his family. He states “Biff is a lazy bum!” (Miller 16) and a moment later Willy says “There’s one thing about Biff–he’s not lazy” (Miller 16). Willy’s own family sees his memory failing and start to talk about him. Even though they love him and are worried for him this creates dark thoughts in his mind and ultimately end up breaking him. Willy’s contradiction show first hand his lack of mental stability to those around him, creating a sense of insanity.

Miller’s use of subtle foreshadowing hints to the reader that there is a deeper issue going on with this man and his family and edges the narrative towards a darker side. When the audience is first introduced to the characters and setting it is described as a “small, fragile-seeming home” (Miller 11). This puts a happy facade over a broken and empty house. This subtle hint to the reader indicates that the family is not as perfect as they seem. Very near after that the audience is given another direct hint towards the fate of Willy. “I suddenly couldn’t drive any more. The car kept going off onto the shoulder, y’know?” (Miller 13). This is a tease of what might happen to the salesman due to the car being such a vital part of his life. It’s not only the audience that has noticed this fact. The family has seen Willy becoming not himself as he has had trouble with the car before. The two brothers are so used to their father crashing a car that one says to another “maybe he smashed up the car again!” (Miller 19) after overhearing the conversation below them. This use of foreshadow points out to the reader that this man is not okay and his mental state and memory is failing him.

Throughout Death of a Salesman, Arthur Miller describes the devastating effects of memory loss and the loss of one’s sanity through seamless flashbacks, comical contradiction, and dark foreshadowing. Many others have also tried to portray the effects of memory loss throughout science and art. Every person has memories, the ramifications of a person’s memory betraying them are substantial and drastic.”

Death of a Salesman, Arthur Miller. (2021, Jun 17). Retrieved from https://papersowl.com/examples/death-of-a-salesman-arthur-miller/

“Death of a Salesman” by Arthur Miller and “The Great Gatsby” by F. Scott Fitzgerald