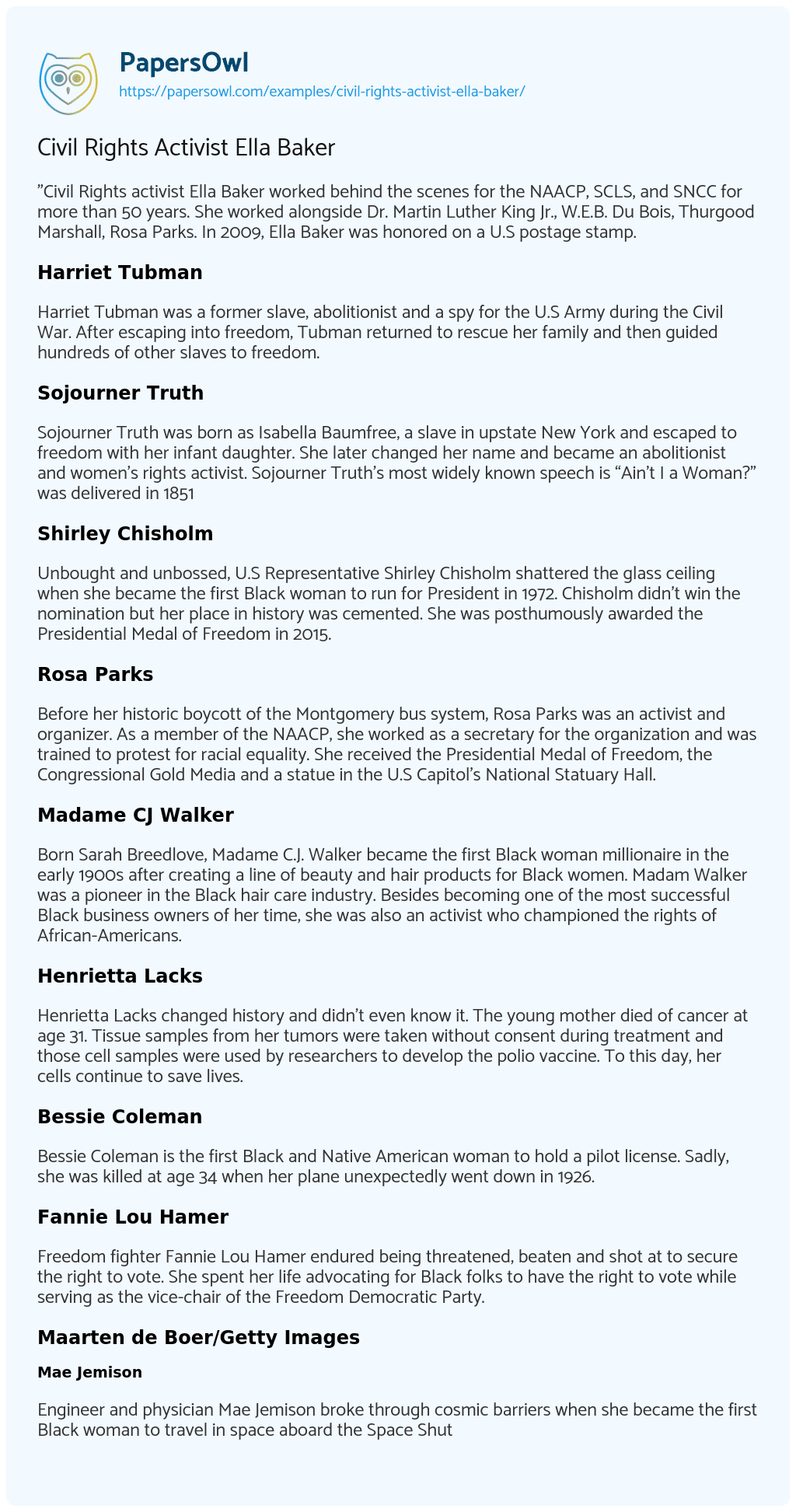 Harriet Tubman was a former slave, abolitionist and a spy for the U.S Army during the Civil War. After escaping into freedom, Tubman returned to rescue her family and then guided hundreds of other slaves to freedom.

Sojourner Truth was born as Isabella Baumfree, a slave in upstate New York and escaped to freedom with her infant daughter. She later changed her name and became an abolitionist and women’s rights activist. Sojourner Truth’s most widely known speech is “Ain’t I a Woman?” was delivered in 1851

Unbought and unbossed, U.S Representative Shirley Chisholm shattered the glass ceiling when she became the first Black woman to run for President in 1972. Chisholm didn’t win the nomination but her place in history was cemented. She was posthumously awarded the Presidential Medal of Freedom in 2015.

Before her historic boycott of the Montgomery bus system, Rosa Parks was an activist and organizer. As a member of the NAACP, she worked as a secretary for the organization and was trained to protest for racial equality. She received the Presidential Medal of Freedom, the Congressional Gold Media and a statue in the U.S Capitol’s National Statuary Hall.

Born Sarah Breedlove, Madame C.J. Walker became the first Black woman millionaire in the early 1900s after creating a line of beauty and hair products for Black women. Madam Walker was a pioneer in the Black hair care industry. Besides becoming one of the most successful Black business owners of her time, she was also an activist who championed the rights of African-Americans.

Henrietta Lacks changed history and didn’t even know it. The young mother died of cancer at age 31. Tissue samples from her tumors were taken without consent during treatment and those cell samples were used by researchers to develop the polio vaccine. To this day, her cells continue to save lives.

Bessie Coleman is the first Black and Native American woman to hold a pilot license. Sadly, she was killed at age 34 when her plane unexpectedly went down in 1926.

Freedom fighter Fannie Lou Hamer endured being threatened, beaten and shot at to secure the right to vote. She spent her life advocating for Black folks to have the right to vote while serving as the vice-chair of the Freedom Democratic Party.

Engineer and physician Mae Jemison broke through cosmic barriers when she became the first Black woman to travel in space aboard the Space Shuttle Endeavour in September 1992. Last year, LEGO created a mini-figurine of Jemison.

Known as the “Mother of the Nation,” Winnie Mandela is a South African activist and politician. In addition to being married to the”

On Period after Civil Rights Movement