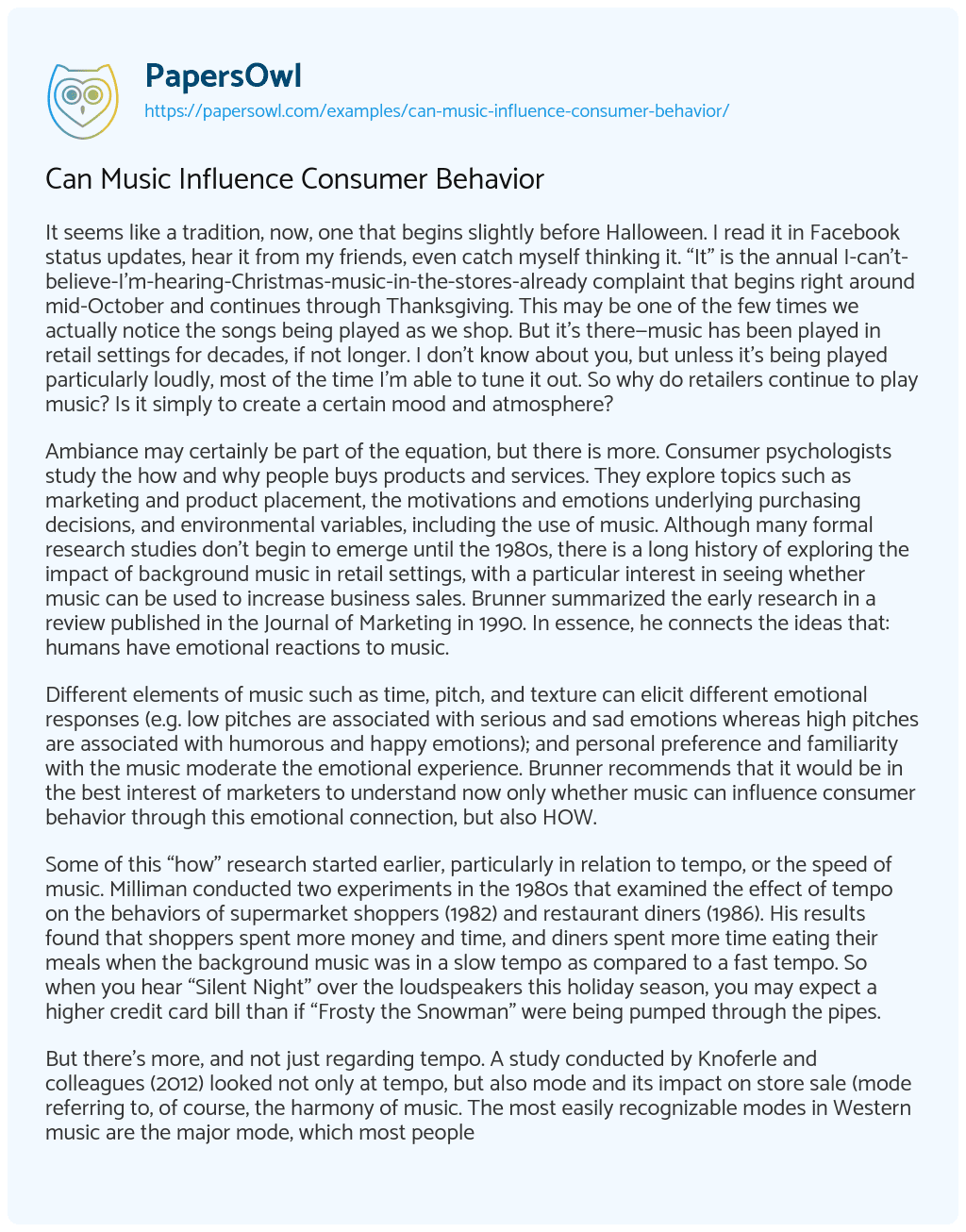 It seems like a tradition, now, one that begins slightly before Halloween. I read it in Facebook status updates, hear it from my friends, even catch myself thinking it. “It” is the annual I-can’t-believe-I’m-hearing-Christmas-music-in-the-stores-already complaint that begins right around mid-October and continues through Thanksgiving. This may be one of the few times we actually notice the songs being played as we shop. But it’s there—music has been played in retail settings for decades, if not longer. I don’t know about you, but unless it’s being played particularly loudly, most of the time I’m able to tune it out. So why do retailers continue to play music? Is it simply to create a certain mood and atmosphere?

Ambiance may certainly be part of the equation, but there is more. Consumer psychologists study the how and why people buys products and services. They explore topics such as marketing and product placement, the motivations and emotions underlying purchasing decisions, and environmental variables, including the use of music. Although many formal research studies don’t begin to emerge until the 1980s, there is a long history of exploring the impact of background music in retail settings, with a particular interest in seeing whether music can be used to increase business sales. Brunner summarized the early research in a review published in the Journal of Marketing in 1990. In essence, he connects the ideas that: humans have emotional reactions to music.

Different elements of music such as time, pitch, and texture can elicit different emotional responses (e.g. low pitches are associated with serious and sad emotions whereas high pitches are associated with humorous and happy emotions); and personal preference and familiarity with the music moderate the emotional experience. Brunner recommends that it would be in the best interest of marketers to understand now only whether music can influence consumer behavior through this emotional connection, but also HOW.

Some of this “how” research started earlier, particularly in relation to tempo, or the speed of music. Milliman conducted two experiments in the 1980s that examined the effect of tempo on the behaviors of supermarket shoppers (1982) and restaurant diners (1986). His results found that shoppers spent more money and time, and diners spent more time eating their meals when the background music was in a slow tempo as compared to a fast tempo. So when you hear “Silent Night” over the loudspeakers this holiday season, you may expect a higher credit card bill than if “Frosty the Snowman” were being pumped through the pipes.

But there’s more, and not just regarding tempo. A study conducted by Knoferle and colleagues (2012) looked not only at tempo, but also mode and its impact on store sale (mode referring to, of course, the harmony of music. The most easily recognizable modes in Western music are the major mode, which most people describe as sounding “happy,” and the minor mode, which is often perceived as “sad.”) Their results suggest that an interaction effect occurs between tempo and mode: in their study, tempo did not have much of an influence for music in the major mode, but having music in a minor mode be in a slow tempo made it MUCH more effective in increasing sales that minor music in a fast tempo. Thus, “Away in a Manger” and “Jingle Bells” may be equally effective at influencing your shopping behavior, but “What Child is This?” is WAY more effective than “God Rest Ye Merry Gentleman.”

Now admittedly hearing holiday music in the stores brings up a different set of responses, from the nostalgic to the happy to the hurting. Thus the nature of the genre (and this time of year) likely moderate consumer shopping effects. But some of the principles connecting tempo, modes, and musically-induced emotions to consumer behavior may still hold true. So this year, it may be worth it the next time you are in the middle of this year’s holiday shopping madness to stop and listen to the music.

My Consumer Behavior is Connected

Consumer Behavior and Responses to Situations