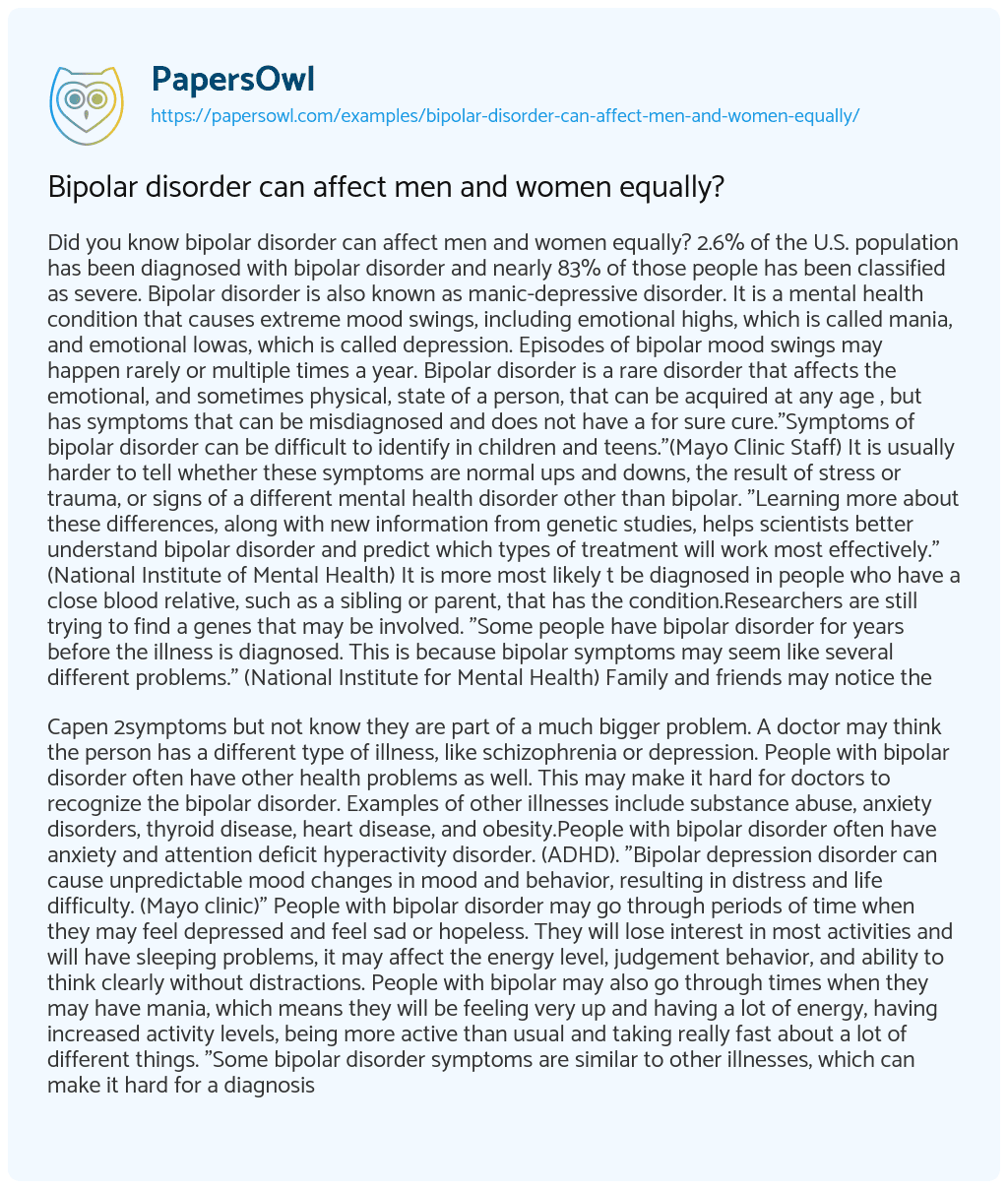 Did you know bipolar disorder can affect men and women equally? 2.6% of the U.S. population has been diagnosed with bipolar disorder and nearly 83% of those people has been classified as severe. Bipolar disorder is also known as manic-depressive disorder. It is a mental health condition that causes extreme mood swings, including emotional highs, which is called mania, and emotional lowas, which is called depression. Episodes of bipolar mood swings may happen rarely or multiple times a year. Bipolar disorder is a rare disorder that affects the emotional, and sometimes physical, state of a person, that can be acquired at any age , but has symptoms that can be misdiagnosed and does not have a for sure cure.”Symptoms of bipolar disorder can be difficult to identify in children and teens.”(Mayo Clinic Staff) It is usually harder to tell whether these symptoms are normal ups and downs, the result of stress or trauma, or signs of a different mental health disorder other than bipolar. “Learning more about these differences, along with new information from genetic studies, helps scientists better understand bipolar disorder and predict which types of treatment will work most effectively.” (National Institute of Mental Health) It is more most likely t be diagnosed in people who have a close blood relative, such as a sibling or parent, that has the condition.Researchers are still trying to find a genes that may be involved. “Some people have bipolar disorder for years before the illness is diagnosed. This is because bipolar symptoms may seem like several different problems.” (National Institute for Mental Health) Family and friends may notice the

Capen 2symptoms but not know they are part of a much bigger problem. A doctor may think the person has a different type of illness, like schizophrenia or depression. People with bipolar disorder often have other health problems as well. This may make it hard for doctors to recognize the bipolar disorder. Examples of other illnesses include substance abuse, anxiety disorders, thyroid disease, heart disease, and obesity.People with bipolar disorder often have anxiety and attention deficit hyperactivity disorder. (ADHD). “Bipolar depression disorder can cause unpredictable mood changes in mood and behavior, resulting in distress and life difficulty. (Mayo clinic)” People with bipolar disorder may go through periods of time when they may feel depressed and feel sad or hopeless. They will lose interest in most activities and will have sleeping problems, it may affect the energy level, judgement behavior, and ability to think clearly without distractions. People with bipolar may also go through times when they may have mania, which means they will be feeling very up and having a lot of energy, having increased activity levels, being more active than usual and taking really fast about a lot of different things. “Some bipolar disorder symptoms are similar to other illnesses, which can make it hard for a diagnosis.” (National Institute for Mental Health) Sometimes a person with severe episodes of mania or depression may have psychotic symptoms such as hallucinations or delusions, which can make a person believe they are famous. They have a lot of money, or has special powers. They may also believe that their life is over and they may think they are penniless, or they may believe they have committed a crime. This can sometimes be misdiagnosed as Schizophrenia. “People with bipolar disorder may have anxiety disorder, substance abuse such as drugs or alcohol, or eating disorder.” Having bipolar disorder can cause a person to think badly of themselves and may want to somehow harm themselves which can put

Capen 3a person at a higher risk for thyroid disease, migraine disease, diabetes, obesity, and other physical illness’.Treatment generally gets most people to feel better, sometimes the most severe form of bipolar disorder. “Neurobiology and rational decisions about the treatment of remain a mystery.” (Young, Trevor 33) Bipolar is a disorder that can be very hard to control, but can be managed by a treatment plan that is usually guided by doctors who specialize in treating mental health disorders (physiatrist) and a team made up of a psychologist, social worker, and a psychiatric nurse. “Treating bipolar depression with antidepressants remains a popular option in clinical practice and published guidelines.” (Young, Trevor 33) Once you have been diagnosed with bipolar disorder, it is usually recommended to start prescribed medications right way to help balance out the moods. “Bipolar disorder requires lifelong treatment and medications, even during periods when you feel better.” (Mayo Clinic) People who go without maintenance treatment are at high risk of continued symptoms or go from having minor mood changes to full-blown mania or depression. People with this disorder often go through different mood swings that but for some people it happens all the time. Bipolar disorder is one of the least common disorders, but it is still very severe in some people and the symptoms of bipolar are sometimes psychotic.