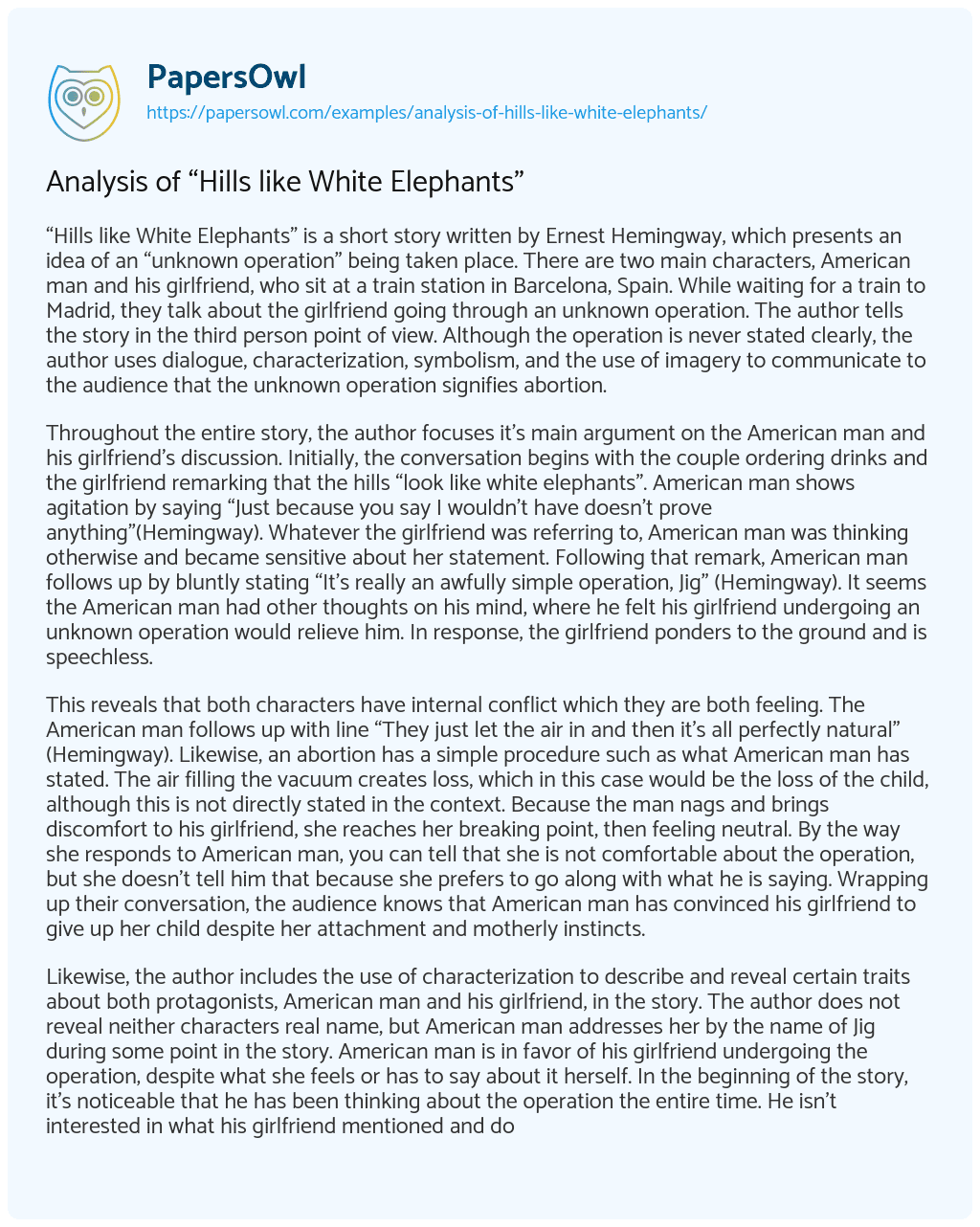 “Hills like White Elephants” is a short story written by Ernest Hemingway, which presents an idea of an “unknown operation” being taken place. There are two main characters, American man and his girlfriend, who sit at a train station in Barcelona, Spain. While waiting for a train to Madrid, they talk about the girlfriend going through an unknown operation. The author tells the story in the third person point of view. Although the operation is never stated clearly, the author uses dialogue, characterization, symbolism, and the use of imagery to communicate to the audience that the unknown operation signifies abortion.

Throughout the entire story, the author focuses it’s main argument on the American man and his girlfriend’s discussion. Initially, the conversation begins with the couple ordering drinks and the girlfriend remarking that the hills “look like white elephants”. American man shows agitation by saying “Just because you say I wouldn’t have doesn’t prove anything”(Hemingway). Whatever the girlfriend was referring to, American man was thinking otherwise and became sensitive about her statement. Following that remark, American man follows up by bluntly stating “It’s really an awfully simple operation, Jig” (Hemingway). It seems the American man had other thoughts on his mind, where he felt his girlfriend undergoing an unknown operation would relieve him. In response, the girlfriend ponders to the ground and is speechless.

This reveals that both characters have internal conflict which they are both feeling. The American man follows up with line “They just let the air in and then it’s all perfectly natural” (Hemingway). Likewise, an abortion has a simple procedure such as what American man has stated. The air filling the vacuum creates loss, which in this case would be the loss of the child, although this is not directly stated in the context. Because the man nags and brings discomfort to his girlfriend, she reaches her breaking point, then feeling neutral. By the way she responds to American man, you can tell that she is not comfortable about the operation, but she doesn’t tell him that because she prefers to go along with what he is saying. Wrapping up their conversation, the audience knows that American man has convinced his girlfriend to give up her child despite her attachment and motherly instincts.

Likewise, the author includes the use of characterization to describe and reveal certain traits about both protagonists, American man and his girlfriend, in the story. The author does not reveal neither characters real name, but American man addresses her by the name of Jig during some point in the story. American man is in favor of his girlfriend undergoing the operation, despite what she feels or has to say about it herself. In the beginning of the story, it’s noticeable that he has been thinking about the operation the entire time. He isn’t interested in what his girlfriend mentioned and doesn’t seem understanding of her emotions or responses she gives him. In addition, he is trying to persuade her that the operation will fix all of their problems and they will be happy with each other. On the other hand, the girlfriend wants to talk until American man brings up an uneasy subject.

The girlfriend may have initially wanted to keep her child but because the two never talked about it, and American man brings it up with thoughts different than hers, she starts to feel reluctant and in question on whether or not to have the abortion due to his feelings. In the story, the girlfriend is not confident in herself or in her responses to the suggestion of an abortion. Because American man continues to pressure the operation, she becomes convinced that it will be the best solution and solve all problems they have.This is conveyed when she says “And if I do it you’ll be happy and things will be like they were and you’ll love me?” (Hemingway). She shifts between the thought of going through with the operation and wanting to avoid it under all means. The other character in the story is the bartender and she only speaks spanish.The girlfriend has to rely on American man to translate in order to get a drink.

In addition, Hemingway uses imagery to leave the audience to contemplate on what the unknown operation is, which is why the story is left incomplete. The author opens the story with the description of the hills across the valley of the Ebro, which is a river in the north of Spain. This places the characters in the setting of the train station, which then leads to the proposition of white elephants. The author does not tell us why the hills are white though. It could be because that’s just their color or because of snow that remained there. As mentioned in the story a couple of times, it considerably hot and there is minimal shade. The use of metaphor connects the setting with the couple, which represents the relationship between them being emotional and uncomfortable. The man is sitting in the chair that’s not in the shade, whereas the woman is sitting in the shade but she is hot so she insists that drinking will cool her off. The author also describes the bar that they are sitting at, including the bamboo beads on the open door.

In conclusion, dialogue contributes to the overall argument that communication is a key factor in a relationship. The girlfriend knows that her relationship with American man has already faded away despite trying to make him happy. She knows even if she has an abortion, their relationship won’t change or make things better. If Hemingway didn’t use white elephants in the beginning of the story, then the unknown operation would have never came to light. The audience wouldn’t have anything to ponder on and the story could have steered in a different direction. The unknown operation in the story is an abortion and Hemingway uses different literary devices to convey this is true although it was never explicitly stated.

Analysis of “Hills like White Elephants”. (2019, Sep 21). Retrieved from https://papersowl.com/examples/analysis-of-hills-like-white-elephants/