Analysis of Creon in Play Antigone 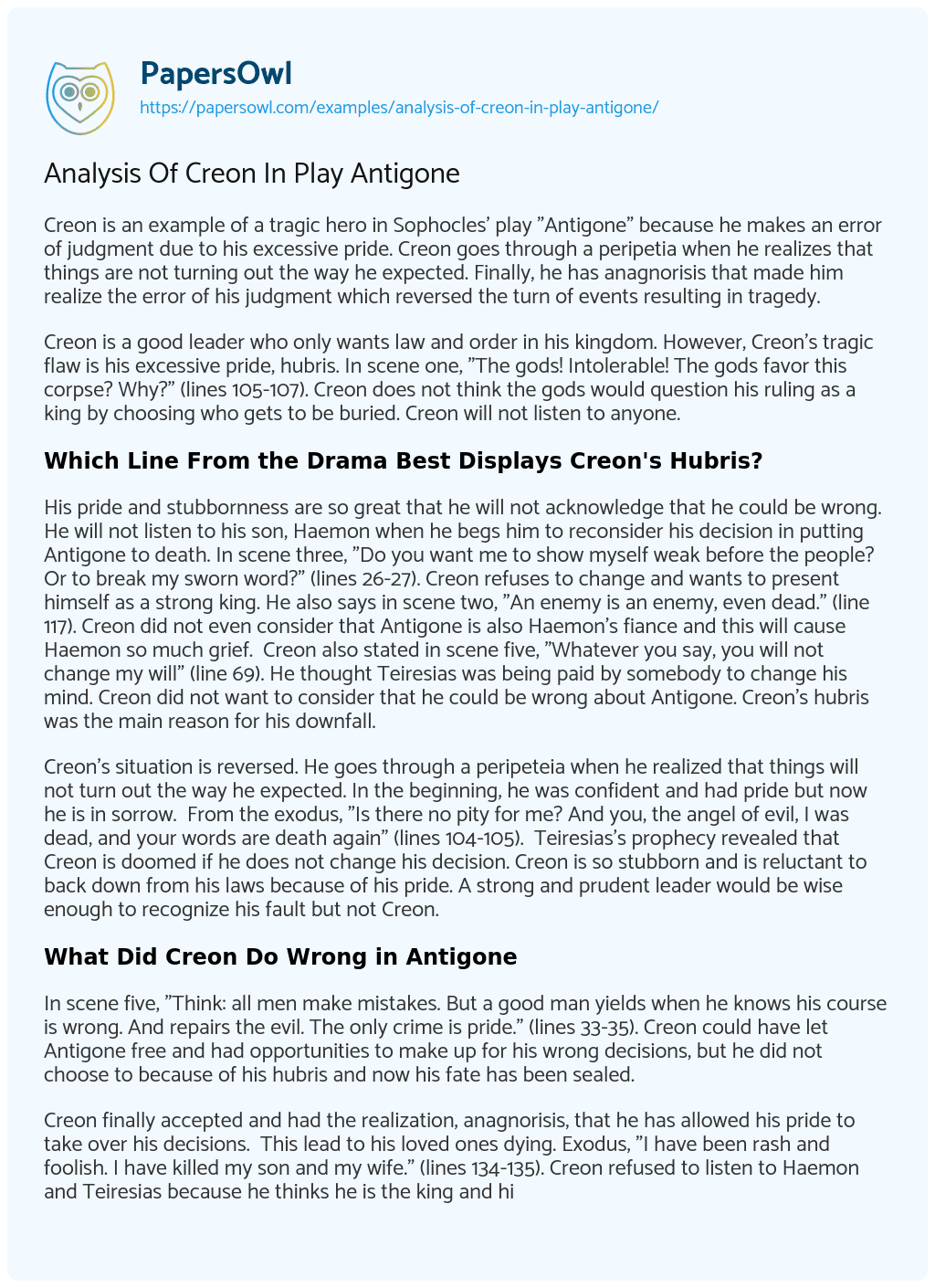 Creon is an example of a tragic hero in Sophocles’ play “Antigone” because he makes an error of judgment due to his excessive pride. Creon goes through a peripetia when he realizes that things are not turning out the way he expected. Finally, he has anagnorisis that made him realize the error of his judgment which reversed the turn of events resulting in tragedy.

Creon is a good leader who only wants law and order in his kingdom. However, Creon’s tragic flaw is his excessive pride, hubris. In scene one, “The gods! Intolerable! The gods favor this corpse? Why?” (lines 105-107). Creon does not think the gods would question his ruling as a king by choosing who gets to be buried. Creon will not listen to anyone.

Which Line From the Drama Best Displays Creon’s Hubris?

His pride and stubbornness are so great that he will not acknowledge that he could be wrong. He will not listen to his son, Haemon when he begs him to reconsider his decision in putting Antigone to death. In scene three, “Do you want me to show myself weak before the people? Or to break my sworn word?” (lines 26-27). Creon refuses to change and wants to present himself as a strong king. He also says in scene two, “An enemy is an enemy, even dead.” (line 117). Creon did not even consider that Antigone is also Haemon’s fiance and this will cause Haemon so much grief.  Creon also stated in scene five, “Whatever you say, you will not change my will” (line 69). He thought Teiresias was being paid by somebody to change his mind. Creon did not want to consider that he could be wrong about Antigone. Creon’s hubris was the main reason for his downfall.

Creon’s situation is reversed. He goes through a peripeteia when he realized that things will not turn out the way he expected. In the beginning, he was confident and had pride but now he is in sorrow.  From the exodus, “Is there no pity for me? And you, the angel of evil, I was dead, and your words are death again” (lines 104-105).  Teiresias’s prophecy revealed that Creon is doomed if he does not change his decision. Creon is so stubborn and is reluctant to back down from his laws because of his pride. A strong and prudent leader would be wise enough to recognize his fault but not Creon.

What Did Creon Do Wrong in Antigone

In scene five, “Think: all men make mistakes. But a good man yields when he knows his course is wrong. And repairs the evil. The only crime is pride.” (lines 33-35). Creon could have let Antigone free and had opportunities to make up for his wrong decisions, but he did not choose to because of his hubris and now his fate has been sealed.

Creon finally accepted and had the realization, anagnorisis, that he has allowed his pride to take over his decisions.  This lead to his loved ones dying. Exodus, “I have been rash and foolish. I have killed my son and my wife.” (lines 134-135). Creon refused to listen to Haemon and Teiresias because he thinks he is the king and his word is the law. Exodus, “My own blind heart has brought me. From darkness to final darkness.” (lines 86-87).  Creon was more concerned about his status as the king and what the people thought of him. He was self-righteous and let his pride get in the way.

Creon is the tragic hero in the play “Antigone”. He goes through all the phases of a tragic character. Creon just wanted to be a good leader and uphold the law, but he had too much pride to listen to anyone. Creon thought he was above everybody else. He tried to write his wrong, but his timing was off. Creon did not mean to be vindictive he just wanted order in his kingdom.  His excessive pride got in the way of effectively dealing with the problems. The realization that he was wrong was too late and this ended with his family dead.

Analysis Of Creon In Play Antigone. (2019, Apr 24). Retrieved from https://papersowl.com/examples/analysis-of-creon-in-play-antigone/

Role of Creon in Antigone Play

Antigone as a Tragic Hero

Reality of Interpretation between Antigone and Creon