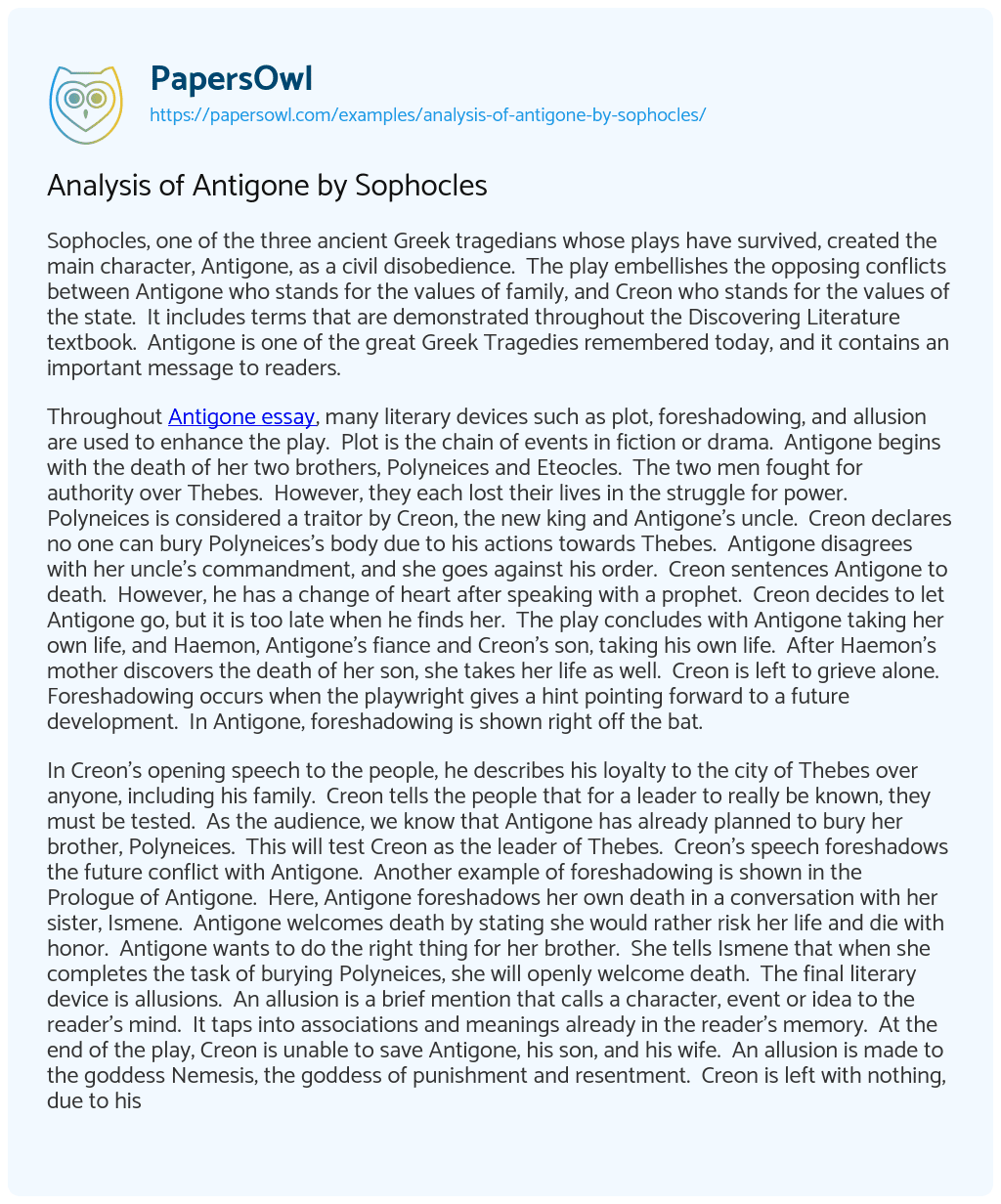 Sophocles, one of the three ancient Greek tragedians whose plays have survived, created the main character, Antigone, as a civil disobedience.  The play embellishes the opposing conflicts between Antigone who stands for the values of family, and Creon who stands for the values of the state.  It includes terms that are demonstrated throughout the Discovering Literature textbook.  Antigone is one of the great Greek Tragedies remembered today, and it contains an important message to readers.

Throughout Antigone essay, many literary devices such as plot, foreshadowing, and allusion are used to enhance the play.  Plot is the chain of events in fiction or drama.  Antigone begins with the death of her two brothers, Polyneices and Eteocles.  The two men fought for authority over Thebes.  However, they each lost their lives in the struggle for power.  Polyneices is considered a traitor by Creon, the new king and Antigone’s uncle.  Creon declares no one can bury Polyneices’s body due to his actions towards Thebes.  Antigone disagrees with her uncle’s commandment, and she goes against his order.  Creon sentences Antigone to death.  However, he has a change of heart after speaking with a prophet.  Creon decides to let Antigone go, but it is too late when he finds her.  The play concludes with Antigone taking her own life, and Haemon, Antigone’s fiance and Creon’s son, taking his own life.  After Haemon’s mother discovers the death of her son, she takes her life as well.  Creon is left to grieve alone.  Foreshadowing occurs when the playwright gives a hint pointing forward to a future development.  In Antigone, foreshadowing is shown right off the bat.

In Creon’s opening speech to the people, he describes his loyalty to the city of Thebes over anyone, including his family.  Creon tells the people that for a leader to really be known, they must be tested.  As the audience, we know that Antigone has already planned to bury her brother, Polyneices.  This will test Creon as the leader of Thebes.  Creon’s speech foreshadows the future conflict with Antigone.  Another example of foreshadowing is shown in the Prologue of Antigone.  Here, Antigone foreshadows her own death in a conversation with her sister, Ismene.  Antigone welcomes death by stating she would rather risk her life and die with honor.  Antigone wants to do the right thing for her brother.  She tells Ismene that when she completes the task of burying Polyneices, she will openly welcome death.  The final literary device is allusions.  An allusion is a brief mention that calls a character, event or idea to the reader’s mind.  It taps into associations and meanings already in the reader’s memory.  At the end of the play, Creon is unable to save Antigone, his son, and his wife.  An allusion is made to the goddess Nemesis, the goddess of punishment and resentment.  Creon is left with nothing, due to his harsh punishment towards Antigone.  Creon, himself, is punished for his actions, and he finally admits to his wrong doings and acknowledges his faults.  Another allusion is made when Antigone is sent to captivity in a cave.  The chorus alludes to the goddess Danae.  Danae was locked away in a tower by her father when prophecy stated her son would kill him.  Both Antigone and Danae were summoned to captivity.

Antigone is considered one of the most famous tragedies ever written.  The play fits into the category of Greek Tragedy.  Greek Tragedy is one of the more unique categories in drama.  The tragedy contains a plot, a tragic hero, theme, diction, a chorus, and spectacles.  Sophocles used these six characteristics when creating Antigone.  One of the more noticeable characteristics is the chorus.  The chorus is introduced to the audience near the beginning of the play.  The chorus comes in celebrating the recent victory in Thebes.  Here, the chorus provides background information about the scene.  It is clear to the audience that Thebes has just won a battle.  In Greek Tragedies, the purpose of the chorus is to describe the background information about a scene, and help the audience follow along with the play.  In Antigone, the chorus does just that.  Another important characteristic contained in Antigone is the use of a tragic hero.  Throughout the play, Antigone displays herself as the tragic hero in a variety of ways.  In the play, Antigone is pure in the eyes of others.  However, she is guilty in the eyes of Creon.  Antigone is willing to make the ultimate sacrifice, death, to do what she considers an honorable act towards her brother.  Antigone receives sympathy because she chooses to stand alone.  In Greek Tragedy, the tragic hero is the character who has heroic traits, but often has flaws or make mistakes that lead to their own downfall.  Antigone’s tragic flaw is her arrogance.

Although Antigone may be difficult to understand, I believe it contains many important lessons that others should read.  I first became familiar with Antigone my sophomore year of high school, when I read it in English class.  At first, I honestly was not interested in the play because I had a difficult time comprehending what was happening.  However, after completely dissecting the play in class, everything was put into perspective for me.  I became aware of Creon’s unbelievable pride in Thebes over his family.  I was in awe after reading and understanding Creon’s opening speech.  However, I believe he got what he deserved in the end.  A reoccurring theme in Antigone is how power both corrupts and blinds the characters in the play.  Creon is the most evident example of this theme.

Sophocles’ tragedy, Antigone, is a play that is still widely known today.  Antigone’s character is described as a civil disobedience, and the tragic hero of the play.  Antigone believed that Creon’s law was unjust, and she had the moral right to defy it.  Antigone’s belief in family values ultimately sentenced her to death.  Antigone embodies the characteristics of a Greek Tragedy and contains important terms from our Discovering Literature textbook.  Antigone also contains a memorable lesson readers should take away from the play.

Analysis of Antigone by Sophocles. (2019, Feb 07). Retrieved from https://papersowl.com/examples/analysis-of-antigone-by-sophocles/

A Character of Antigone in the Play

Analysis of Creon in Play Antigone

Right against Right in Antigone by Sophocles

Antigone as a Tragic Hero