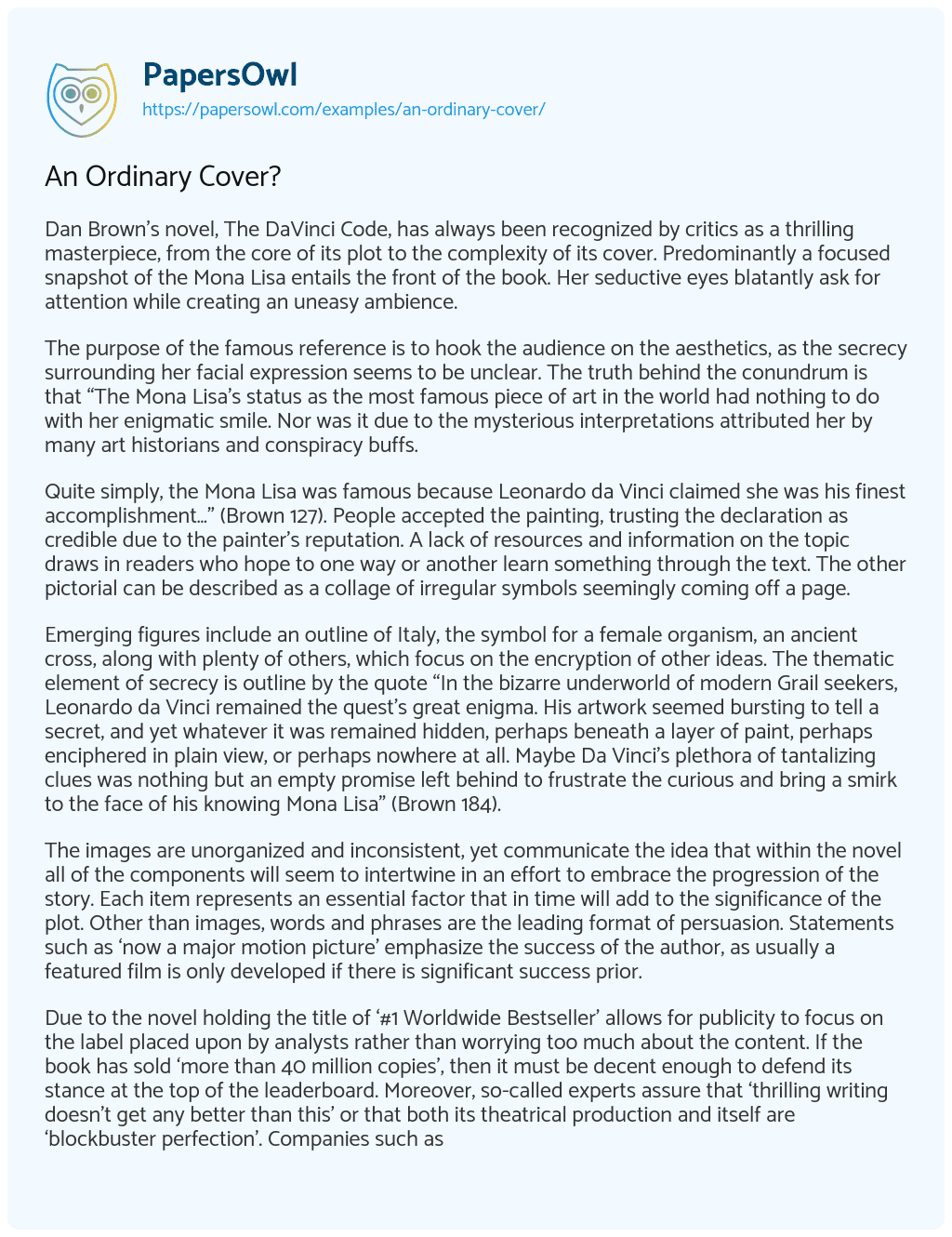 Dan Brown’s novel, The DaVinci Code, has always been recognized by critics as a thrilling masterpiece, from the core of its plot to the complexity of its cover. Predominantly a focused snapshot of the Mona Lisa entails the front of the book. Her seductive eyes blatantly ask for attention while creating an uneasy ambience.

The purpose of the famous reference is to hook the audience on the aesthetics, as the secrecy surrounding her facial expression seems to be unclear. The truth behind the conundrum is that “The Mona Lisa’s status as the most famous piece of art in the world had nothing to do with her enigmatic smile. Nor was it due to the mysterious interpretations attributed her by many art historians and conspiracy buffs.

Quite simply, the Mona Lisa was famous because Leonardo da Vinci claimed she was his finest accomplishment…” (Brown 127). People accepted the painting, trusting the declaration as credible due to the painter’s reputation. A lack of resources and information on the topic draws in readers who hope to one way or another learn something through the text. The other pictorial can be described as a collage of irregular symbols seemingly coming off a page.

Emerging figures include an outline of Italy, the symbol for a female organism, an ancient cross, along with plenty of others, which focus on the encryption of other ideas. The thematic element of secrecy is outline by the quote “In the bizarre underworld of modern Grail seekers, Leonardo da Vinci remained the quest’s great enigma. His artwork seemed bursting to tell a secret, and yet whatever it was remained hidden, perhaps beneath a layer of paint, perhaps enciphered in plain view, or perhaps nowhere at all. Maybe Da Vinci’s plethora of tantalizing clues was nothing but an empty promise left behind to frustrate the curious and bring a smirk to the face of his knowing Mona Lisa” (Brown 184).

The images are unorganized and inconsistent, yet communicate the idea that within the novel all of the components will seem to intertwine in an effort to embrace the progression of the story. Each item represents an essential factor that in time will add to the significance of the plot. Other than images, words and phrases are the leading format of persuasion. Statements such as ‘now a major motion picture’ emphasize the success of the author, as usually a featured film is only developed if there is significant success prior.

Due to the novel holding the title of ‘#1 Worldwide Bestseller’ allows for publicity to focus on the label placed upon by analysts rather than worrying too much about the content. If the book has sold ‘more than 40 million copies’, then it must be decent enough to defend its stance at the top of the leaderboard. Moreover, so-called experts assure that ‘thrilling writing doesn’t get any better than this’ or that both its theatrical production and itself are ‘blockbuster perfection’. Companies such as People and The New York Times generally make the statements as a way to promote a given product with their genuine opinion. The reporters demonstrate no significant bias towards it, but more than often whatever might be printed as a review will be positive.

Furthermore, there is the use of superior academic vocabulary and remarkable adjectives to enhance the text’s appeal towards the audience. This technique makes the situation seem better than it is, or at least until the lector commits to reading. Instead of using bland terminology, the writer chooses to include collegian diction to minimize boredom and an absence of interest.

Lastly, the lack of an author’s note is inconvenient, as the reader will not be given a complete insight to the book during the initial preview. In its entirety, this means that the novel is missing a proper background to the story’s origin, which only leads to an improper introduction. Critical data much like the purpose of the novel or how the author managed to write the story are left unanswered and up to the reader’s imagination. Without concrete details, assumptions will just have to be made.”