Zen and the Art of Motorcycle Care 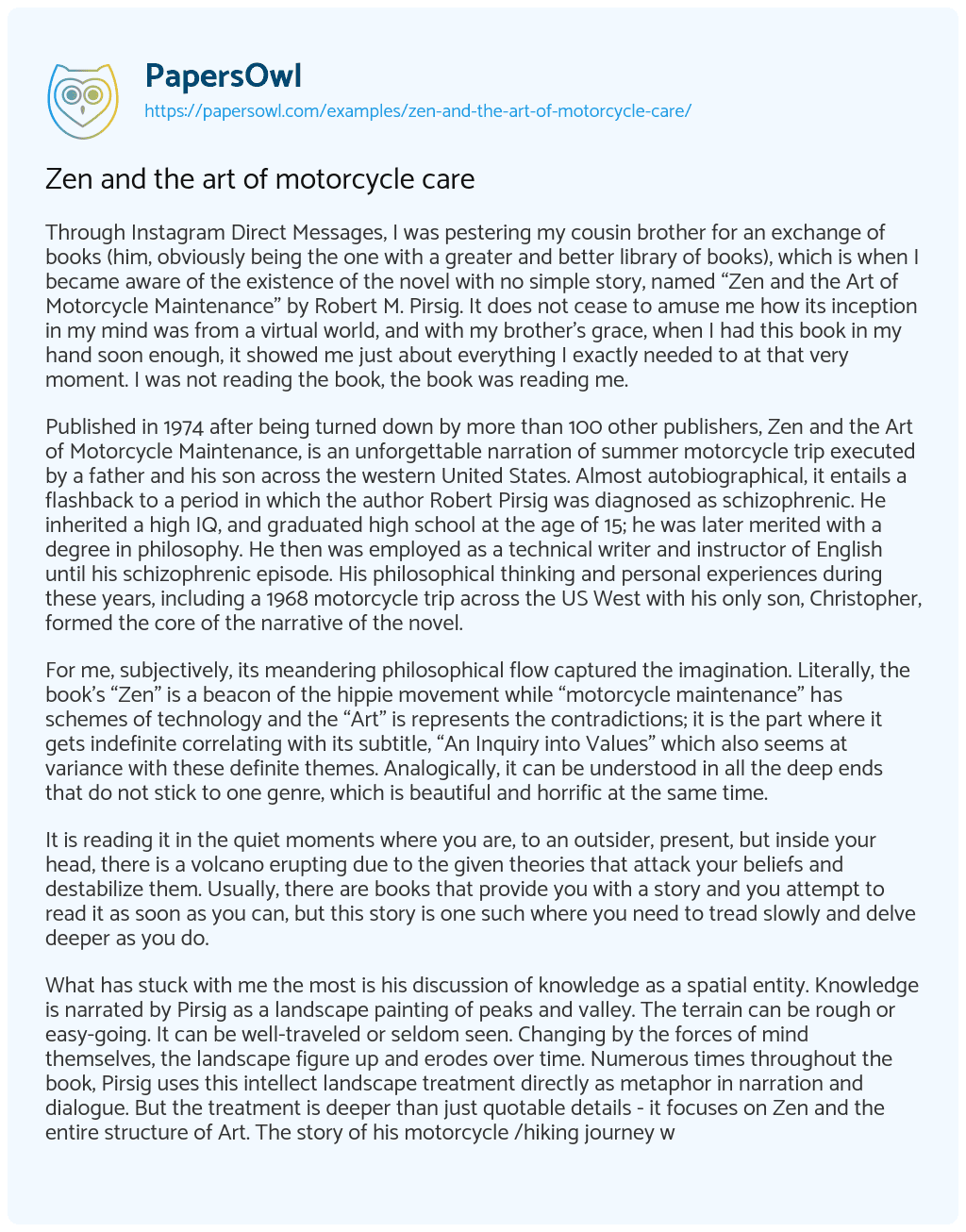 Through Instagram Direct Messages, I was pestering my cousin brother for an exchange of books (him, obviously being the one with a greater and better library of books), which is when I became aware of the existence of the novel with no simple story, named “Zen and the Art of Motorcycle Maintenance” by Robert M. Pirsig. It does not cease to amuse me how its inception in my mind was from a virtual world, and with my brother’s grace, when I had this book in my hand soon enough, it showed me just about everything I exactly needed to at that very moment. I was not reading the book, the book was reading me.

Published in 1974 after being turned down by more than 100 other publishers, Zen and the Art of Motorcycle Maintenance, is an unforgettable narration of summer motorcycle trip executed by a father and his son across the western United States. Almost autobiographical, it entails a flashback to a period in which the author Robert Pirsig was diagnosed as schizophrenic. He inherited a high IQ, and graduated high school at the age of 15; he was later merited with a degree in philosophy. He then was employed as a technical writer and instructor of English until his schizophrenic episode. His philosophical thinking and personal experiences during these years, including a 1968 motorcycle trip across the US West with his only son, Christopher, formed the core of the narrative of the novel.

For me, subjectively, its meandering philosophical flow captured the imagination. Literally, the book’s “Zen” is a beacon of the hippie movement while “motorcycle maintenance” has schemes of technology and the “Art” is represents the contradictions; it is the part where it gets indefinite correlating with its subtitle, “An Inquiry into Values” which also seems at variance with these definite themes. Analogically, it can be understood in all the deep ends that do not stick to one genre, which is beautiful and horrific at the same time.

It is reading it in the quiet moments where you are, to an outsider, present, but inside your head, there is a volcano erupting due to the given theories that attack your beliefs and destabilize them. Usually, there are books that provide you with a story and you attempt to read it as soon as you can, but this story is one such where you need to tread slowly and delve deeper as you do.

What has stuck with me the most is his discussion of knowledge as a spatial entity. Knowledge is narrated by Pirsig as a landscape painting of peaks and valley. The terrain can be rough or easy-going. It can be well-traveled or seldom seen. Changing by the forces of mind themselves, the landscape figure up and erodes over time. Numerous times throughout the book, Pirsig uses this intellect landscape treatment directly as metaphor in narration and dialogue. But the treatment is deeper than just quotable details – it focuses on Zen and the entire structure of Art. The story of his motorcycle /hiking journey with his son in latitude with his intellect journey (comprised of his chautauquas and his past as Phaedrus). Intricately, throughout, law of similarity between those two journeys is absolutely uncanny. (This is worth essays, but here’s a taste.) Each of the follow gearing points are an attempt to appearance just a few law of similarity between the physical and intellectual landscape as told by Pirsig: As the motorcycle political party traverses the well-traveled, low altitude Yellowstone Valley , the reader learns about Phaedrus’ human relationship to conventional Western thought. Both landscapes (physical and intellectual) are well-worn paths of past. Both landscapes are uneven and untraveled, and both are unsafe because of the long distance to fall before reaching established, populated ground.

Let me explain. Zen and the Art of Motorcycle Maintenance interweaves two parallel plots: the first is the road trip undertaken by the narrator (author himself) and his son Chris. The second plot discusses the life and thoughts of a solitary, intellect-obsessed Phaedrus, with a philosophical concept named Quality, with a capital Q. At the beginning of the story, the narrator and Chris leave Minneapolis on a motorcycle trip with their friends, John and Sylvia Sutherland. As the group travels, the narrator intersperses accounts of the trip with philosophical discourses that he calls Chautauquas.

The narrator is brilliant, has pursued Eastern and Western philosophy and spirituality, and is grounded in scientific intellection and technological understanding, too. He has served in the armed military unit , been a university professor, and writes technical documents for a living. He is preoccupied with thinking, and that trait reveals something unresolved in his personality. It has resisted him from connecting to his life roles as fully as one might wish, particularly when it comes to being an emotionally healthy father who is representing parenthood fairly. He has developed a unique perspective toward motorcycle sustainment, and riding round is one of his briny pursuits. He embarks on this journeying as a seeking for some resolution to his ongoing life angst. (*Spoiler Alert*) This angst, is his Previous- Phadreus, which is transparent, and transparently a ghost to Pirsig, which is “haunting” him and his son. The very first appearance of this ghost leaves the reader bound in a spell in the most terrified way possible. It is quoted as follows:

“And in the fog there appears an intimation of a figure. It disappears when I look at it directly, but then reappears in the earner of my vision when I turn my glance. I am about to say something, to call to it, to recognize it, but then do not, knowing that to recognize it by any gesture or action is to give it a reality which it must not have. But it is a figure I recognize even though I do not let on. It is Phaedrus.

During the writing process of this review, I found that the author died on April 24, 2017 which is strangely also the time I started reading it. I learned that there is a fine line between genius and mad, but this line is not always visible to the onlooker, it shifts in phases and ideas. Robert Pirsig had been diagnosed with catatonic schizophrenia but one fine day, he waved a gun to his wife’s face and was institutionalized after that and not post the diagnosis.

Another significant part of the book is the stark division of a romantic and a classicist. The author identifies himself as a classicist, but the labeling itself is romantic, ironically. Layman terms like technophiles or technophobes can be casually used in place of classicists and romantics. Coincidentally, classification is the very of heart of Aristotelian philosophy.

The book was rejected by a hundred publishers, but once it was published, it received acclaim, both commercial and critical, all over the world. For normies, the book may be tedious. But the key is to stick to the analogies and not give up no matter how slow you read. For hippies, the book may be quasi-bible. For philosophers, it may be collection of what Plato and Aristotle have already questioned. But in his defense, he was just trying make peace with himself.

Zen and the art of motorcycle care. (2021, Oct 16). Retrieved from https://papersowl.com/examples/zen-and-the-art-of-motorcycle-care/