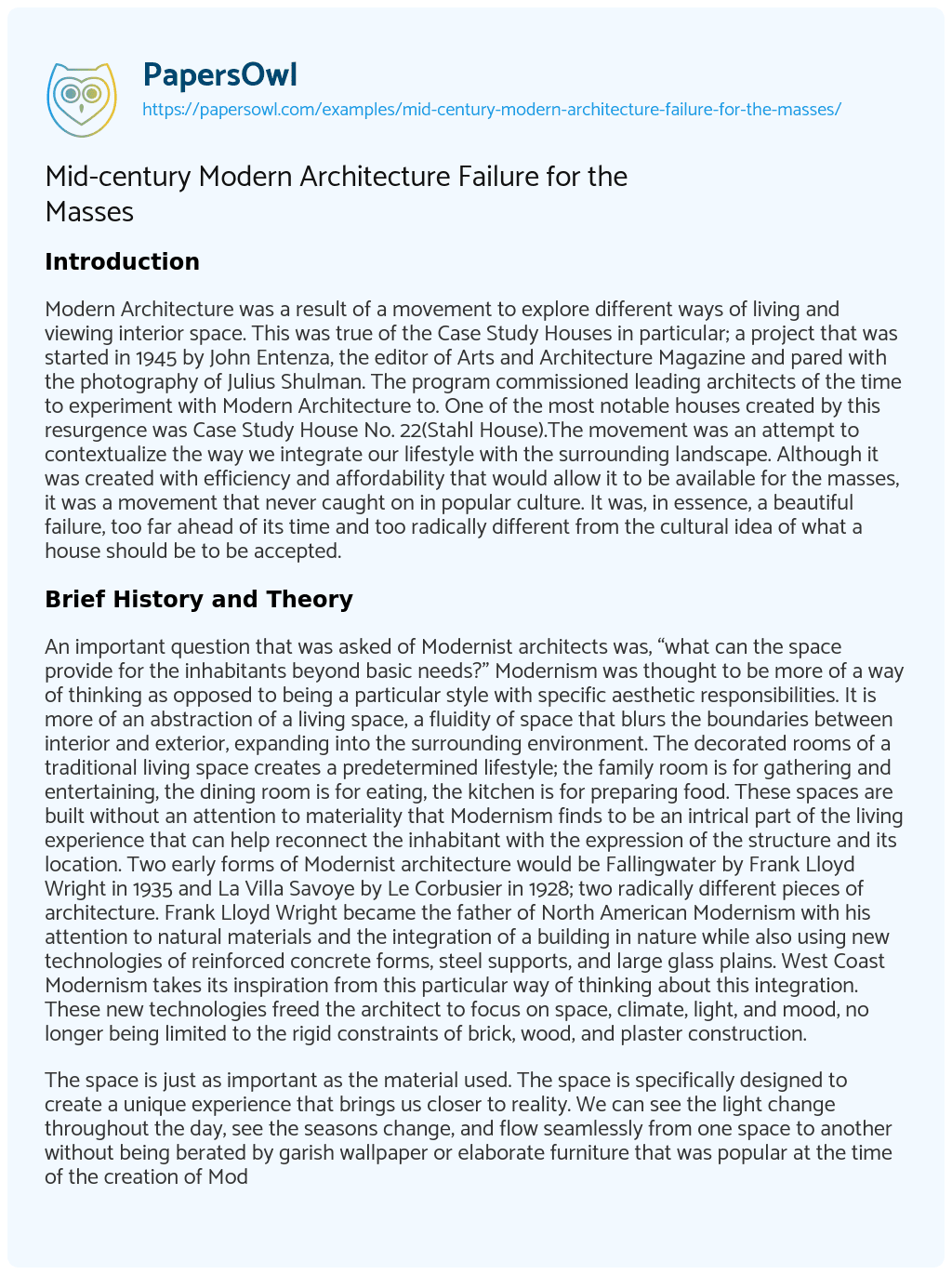 Modern Architecture was a result of a movement to explore different ways of living and viewing interior space. This was true of the Case Study Houses in particular; a project that was started in 1945 by John Entenza, the editor of Arts and Architecture Magazine and pared with the photography of Julius Shulman. The program commissioned leading architects of the time to experiment with Modern Architecture to. One of the most notable houses created by this resurgence was Case Study House No. 22(Stahl House).The movement was an attempt to contextualize the way we integrate our lifestyle with the surrounding landscape. Although it was created with efficiency and affordability that would allow it to be available for the masses, it was a movement that never caught on in popular culture. It was, in essence, a beautiful failure, too far ahead of its time and too radically different from the cultural idea of what a house should be to be accepted.

An important question that was asked of Modernist architects was, “what can the space provide for the inhabitants beyond basic needs?” Modernism was thought to be more of a way of thinking as opposed to being a particular style with specific aesthetic responsibilities. It is more of an abstraction of a living space, a fluidity of space that blurs the boundaries between interior and exterior, expanding into the surrounding environment. The decorated rooms of a traditional living space creates a predetermined lifestyle; the family room is for gathering and entertaining, the dining room is for eating, the kitchen is for preparing food. These spaces are built without an attention to materiality that Modernism finds to be an intrical part of the living experience that can help reconnect the inhabitant with the expression of the structure and its location. Two early forms of Modernist architecture would be Fallingwater by Frank Lloyd Wright in 1935 and La Villa Savoye by Le Corbusier in 1928; two radically different pieces of architecture. Frank Lloyd Wright became the father of North American Modernism with his attention to natural materials and the integration of a building in nature while also using new technologies of reinforced concrete forms, steel supports, and large glass plains. West Coast Modernism takes its inspiration from this particular way of thinking about this integration. These new technologies freed the architect to focus on space, climate, light, and mood, no longer being limited to the rigid constraints of brick, wood, and plaster construction.

The space is just as important as the material used. The space is specifically designed to create a unique experience that brings us closer to reality. We can see the light change throughout the day, see the seasons change, and flow seamlessly from one space to another without being berated by garish wallpaper or elaborate furniture that was popular at the time of the creation of Modernism. Its simplicity provided a sense of stillness in the increasingly chaotic environment of 20th century America. Rudolph Schindler was another Architect that highly influenced West Coast Modernism. He developed a theory of aesthetics and how they could change the way we think about living. He actually considered his designs to be Space Architecture rather than Modern Architecture. The idea of normal living was rejected to propose something completely different that he thought could transform our lives and in turn how society lived. His Kings Road House was built in 1921 in Los Angeles; built for two couples to live in, with four studios, one for each individual to live and working in. Each studio had a fireplace for cooking, rejecting the traditional idea of a kitchen. The minimal inclosure connected the spaces to the mild southern california climate as much as possible.

The Great Depression and World War II had put much of the advancements of modern architecture on hold. After the war the housing boom ensued and with it, John Entenza, the editor of Arts and Architecture Magazine, created the Case Study House project to revive the early Modernist movement. These articles were accompanied by photographs of these houses. Julius Shulman is notable for taking some of the most powerful images of these houses, one of which was Case Study House No. 22, also known as the Stahl House, in 1960; it was designed by architect Pierre Koenig in 1959 and is to this day, along with falling water, one of the most photographed houses in the world. The photo to the left, which he called “one of my masterpieces,” is the most successful real estate image ever taken. Both Shulman and Koenig stood behind the Case Study House project idea that this style of housing could be integrated into society and used for the masses. Koenig’s intention, as captured in James Steel’s biography Pierre Koenig, “was to be part of a mechanism that could produce billions of homes, like sausages or cars in a factory.” However, there was a general cautiousness by the public around this new aesthetic. The following was relatively small in comparison to the traditional home. Koenig later told interviewer Michael LaFetra about a conversation with his instructor: “He said ‘No, you cannot use steel as an industrial material for domestic architecture. You cannot mix them up. The housewife won’t like [steel houses].’(Head) The post war society reacted to a direct response to a need. This response was given by developers that valued quantity construction over quality design leading to the mass production of cookie cutter housing developments that met the minimum standards of the masses.

The Psychology of Home

There may be a primal need to have spaces that are separately defined. We may still be psychologically influenced by our cave dwelling ancestors that found enclosed shelter to be the safest place to live. Today, when we think of a house we often think of what we use to draw as a child, a box with two windows, a peak roof and a front door. This image/shape of a home is used on street signs, network configurations, bird houses, doll houses, and even the home plate of a baseball diamond. A Modernist Architect rejects these inherent notions of home by opening up the space to its surroundings and removing the separations between activity specific rooms of a traditional home. Many Modernist homes are also not necessarily easy to build for general contractors that are trained to build traditional wood framed houses. Cite specific homes are often seen as expensive and impractical as the cost of construction and undeveloped land continues to rize. Although it can be said that this is similar to the transition to electric cars or solar energy and the resistance society has towards making a beneficial change for the future. An average person in the market for a new home may also look at the use of raw materials in the interior space as being incomplete without being painted or carpeted. This resistance to difference is what made Mid-century Modernism so difficult to accept. There simply was not a market for it. The Industrial Designer Raymond Loewy described the pace of progression of design as being limited to, “the most advanced yet acceptable for every generation,” meaning that design can only be pushed so far; once you have crossed this line it is difficult to get the majority of a population on board. Without this majority, Modernist Architecture continued to remain luxury as opposed to a necessity.

It was around the 1960s that corporate and institutional entities had fully embraced what Modern Architecture could do in the workspace, schools, libraries, airports and so on. They recognized the positive impact that space, light mood had on people. Unfortunately the Modernist Aesthetic of these places caused an association with institutionality. As a result it caused further resistance to the incorporation of the Modernist aesthetic in the domestic space. It became reminiscent of work and the daily grind. The masses believed that public and domestic spaces should feel and operate differently.

In conclusion we find that the failure of Mid-century Modern Architecture is a result of three factors. The first factor was the original loss of traction as a result of the great depression and World War II. The second factor was the housing boom after the return of the troops that did not place value on Modernist Design aesthetic. This leads us to our next factor; the lack of use of Modernist Architecture in the development of communities for the masses contributed to the further conditioning of the idea of what a home should be, reinforcing the traditional living space and alienating Modernism, making it more and more difficult to integrate it into society. Finally, its adaptation by corporate and public interests in the creation of environments that used the language of Modernist Architecture to create functional public spaces, caused an association with institutionality, causing a backlash against its use in the domestic space.

Modernism One of the most Influential Literary Movements in England